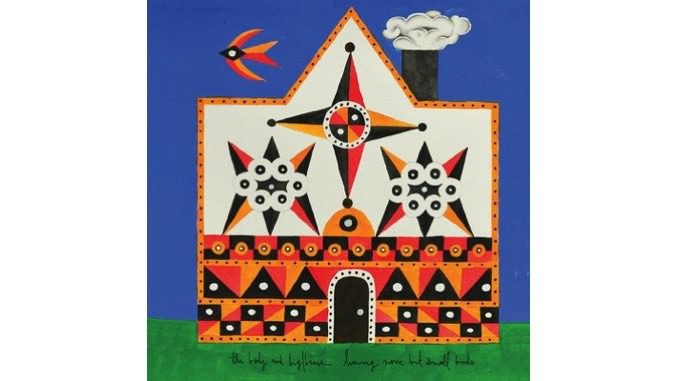 Somewhere along the way, the musical form we once referred to as heavy metal reached a point where it had become as boundless as jazz. It may seem counter-intuitive, but not only can harsh, distorted guitars blend with any other musical element you pair them with, but the density they create also lends itself to subtle shading. Which explains why musicians who play monolithic, crushing music can tend to regard guitar tones with the same discerning sensibilities as fine-wine connoisseurs comparing bottles of different vintage. Metal, alas, increasingly reveals itself to be music built on a keen awareness of texture—at least when it’s coming from bands like The Body and BIG|BRAVE.

On Leaving None But Small Birds, the two acts come together for a joint collaboration that, on paper, would suggest a complementary merger between The Body’s noise-laden brand of sludge and BIG|BRAVE’s melodic doom metal/drone hybrid. As it turns out, the two groups sure do prove to be complementary, but they do so while playing in an old-timey folk style, perhaps the last thing one might have expected from either group. Then again, we probably should have seen it coming. For over 20 years now, The Body—a Portland, Oregon-based duo with a voracious appetite for abrasion—have more or less constantly sought new ways to re-configure the drums, guitars, electronics and screaming that make up their core sound.

Crucially, The Body have released more collaboration albums with other artists than they’ve put out on their own. They also abhor even being associated with metal and have long flirted with more tempered modes of expression. As far back, for example, as their second offering, 2010’s All the Waters of the Earth Turn to Blood, guitarist-vocalist Chip King and drummer-programmer Lee Buford juxtaposed the immensity of their speaker-destroying aesthetic against a choir. For 2018’s I Have Fought Against It, But I Can’t Any Longer, Buford and King went in a more spacious direction, trying their hand at beat-driven ambient music (or a mangled approximation thereof). Clearly, then, this is an outfit that places a high premium on exploration and creative risk.

Be that as it may, none of The Body’s past decisions can quite prepare listeners for how smoothly they blend into their surroundings on Leaving None But Small Birds, which consists of re-worked traditional songs and hymns from Appalachia, Canada and England. Conceived as a challenge by Buford to emulate the rustic style of The Band, the album casts both The Body and BIG|BRAVE in a whole new light that should nevertheless resonate with both fanbases and endear them both to listeners who might otherwise be put off by the forcefulness of their respective catalogs. Of the two groups, BIG|BRAVE have shown the most capacity for tunefulness, but their facility with acoustic instrumentation on Leaving None But Small Birds turns out to be as radical a stylistic shift as The Body’s.

Originally, BIG|BRAVE shared The Body’s desire to throttle amp cabinet cones to their absolute limits. But by their second album, 2015’s Au De La, the Montreal trio shifted gears, deciding to highlight the inherent melodic qualities in frontwoman Robin Wattie’s voice. Since then, Wattie and her bandmates have used their instrumentation to induce a sense of majesty not unlike the way cathedral builders used stone, space and light to inspire awe. Once Wattie started quote-unquote singing, she showed a distinct ability to convey majesty and mournfulness at the same time. And like The Body, BIG|BRAVE have long demonstrated an appreciation for dynamics and texture. In effect, you could say they’ve been making “hymns” out of heavy music all along.

Nevertheless, you’ll find scant suggestion across the band’s five albums of the finesse that defines Leaving None But Small Birds. Towards the end of opening number “Blackest Crow,” for example, wayward strums of what sound like mandolin wander off the main path the rest of the instruments are on, stretching the tune ever so slightly into the realm of dissonance. If you’re not paying close attention, you might not even notice, which just goes to show how committed both of these bands are to making every sound count, no matter how subdued. Where The Body and BIG|BRAVE could be seen as artists who use volume indiscriminately—even gratuitously—this time they both show that mindfulness can be mind-blowing, too.

By the time any guitar distortion eases its way in about halfway through the song sequence, the transition is so gradual that it makes perfect sense, announcing itself in a most unobtrusive fashion. Both bands have hit their audience over the head with jagged contrasts in the past, but here they pace the music so that there’s a gradual, almost imperceptible incline in heaviness. Indeed, everything about Leaving None But Small Birds bears a deliberate attention to detail. Even fans of BIG|BRAVE and The Body might not necessarily think of them as aspiring masters of craft, but there’s no other way to see them now after this collaboration. With the insistent, shanty-like cadence of “Oh Sinner,” for example, the two groups mimic the hypnotic drone that’s become BIG|BRAVE’s stock in trade, but together they prove that they can be just as powerful with the volume turned way down.

Likewise, the decision to draw lyrics from folk standards of yore further enhances the music’s impact. Time and again, whether in interviews or their music, Buford and King have expressed their feeling of mistrust and dislike for other people. To be fair, their feelings don’t so much come from a misanthropical place so much as from a sense of disappointment in how cruel people can be to one another. Still, they often come across as stuck in an almost cartoonishly bleak outlook. Hearing them work in a setting where the negativity isn’t laid on so thick gives us an opportunity to savor their musicianship. Of course, it helps that Wattie’s voice suits the bare-knuckle despair of the words so well. Somehow, old songs about indentured factory child laborers (“Hard Times”), kidnapped children dying in the woods (“Babes in the Woods”) and a woman avenging the murder of her baby (“Polly Gosford”) hit harder than scowling from behind a barrage of noise. And though the lyrics have a nursery-rhyme quality, Wattie invests them with a touch of sadness that haunts precisely because she refrains from going overboard.

A bold, career-defining step, Leaving None But Small Birds updates metal’s longstanding obsession with morbidity, even as the musicians look to the past. That they sound so natural exploring these old, dusty sounds together, and that they manage to breathe new life into them, must be recognized as a monumental achievement