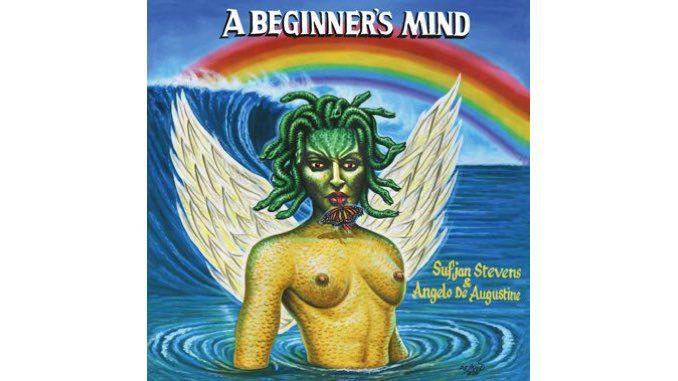 Like a teacher’s pet eager to please, Sufjan Stevens certainly enjoys having an assignment attached to his art. For a while there, the lines were certainly blurred on whether the guy was releasing actual albums or installments. Earlier in his career he teased fans, and maybe more so the music press, with his audacious plan to write and record 50 albums, one for each U.S. state. The grandiose promise was never kept, of course, as he was only able to tackle two—his 2003 debut Michigan and his 2005 breakthrough Illinois—before his attention veered elsewhere.

Throughout Stevens’ extended break from his affair with regional history through song, his sheer ambition as an artist has never wavered. He’s maintained a relatively prolific streak while taking attentive notes, with prime examples being his detours into a complete album of Christmas music, and his soundtracking work for the films The BQE and, more notably, Call My By Your Name. But with his brand new collaborative album A Beginners’ Mind, with fellow Asthmatic Kitty recording artist Angelo De Augustine, the parameters of the project seem less rigid in execution than they have been in the past.

While Stevens is no stranger to genre exploration and experimentation, something he has never been able to shake free of is how tightly wound his music sounds upon execution. Whether it was his Whoville marching band orchestrations on his maximalist twee masterpiece Illinois, the electronic textures on 2010’s polarizing The Age of Adz or last year’s The Ascension, you could feel him laboring over countless hours of transcribing the exact notes. The perspiration dripping from his brow gave weight to every last whispered lyric and wrung-out glockenspiel hit. Even his revelatory (and arguably best) record Carrie and Lowell, which was much more minimal in musical breadth than anything he had done since early records like Seven Swans, felt claustrophobic in it’s white-hot emotional depth and recorded in a way that was almost too close for comfort.

But with A Beginner’s Mind, Sufjan Stevens the auteur has loosened his grip enough to concede some creative control. The album is, according to the credits, a total collaborative effort with De Augustine—according to the liner notes, the two wrote, arranged, performed and mixed everything on the record, save for extra drum and bass accompaniment on “Back to Oz” and backing vocals on “Lacrimae” by Melissa Mary Ahern. The two wrote the album together, trading verses and choruses during a month-long writing blitz while staying at a friend’s cabin in Upstate New York.

Of course, this is a Sufjan project. So the footnote that goes along with the record should be explained. Apparently, the two soft-spoken troubadours bonded over their appreciation of the silver screen as the 14 songs on A Beginner’s Mind were inspired by specific films that they watched together during their stay. The two cite a wide variety of works that span all genres and levels of “sophistication,” such as The Night of the Living Dead, All About Eve, Point Break, She’s Gotta Have It and Wings of Desire. Another film that inspired the two was Silence of the Lambs, so much so that the two dedicated this album to the loving memory of that film’s director, Jonathan Demme.

The album takes its name from the Zen Buddhist term Shoshin, which encourages those who practice to approach situations with a sense of openness and the acceptance of a “beginners mind.” It’s a message that permeates the record in both its message and in its construction. Stevens and De Augustine both possess gorgeous falsettos that evoke a certain beauty on their own. But on the moments that they sing in tandem on the album, they conjure elemental harmonies that neither could have achieved while double-tracking alone in the hushed corners of a studio. On the opener “Reach Out,” the pair sound like a bruised, cardigan-draped interpretation of the Everly Brothers as their voices meld with one another like two spirits holding hands and walking through a brick wall into some realm beyond our world.

Neither of their personalities as vocalists are diminished in this collision, as Stevens assumes his role of the lower register and De Augustine hits the high notes. While this aspect of the record is an endless thrill that only grows more impressive as you get further into the tracklist, perhaps its greatest achievement is the downright loose feel of some of the orchestrations and performances that the two were able to pull from one another in this collaboration. By no means is this The Replacements’ Hootenanny, but there is a sense of ramshackle comfort and ease to these songs. While most of the tracklist maintains a stripped-down, conjoined-twin troubadour feeling, moments like the up-tempo, psychedelic pop of “Back to Oz” feel as close these two have come to making a racket in a garage just for kicks in quite some time.

Rarely is there any sense of bombastic flair, and in certain moments, like the Stevens-led piano ballad “(This Is) The Thing” and the lo-fi “It’s Your Own Body and Mind,” you get a sense that the initial voice memos are what the two built around to create what you would ultimately hear on the record. These breaks from harmony provide an extra wallop whenever they appear, like on the tender “Murder and Crime,” where De Augustine is given the spotlight to deliver its final blow. “Where does everything go when everything’s gone?” he asks as Stevens’ breathy vocal accompaniment trails off, “For my heart cannot break much more.”

The instrumentation on these candlelit ballads is reminiscent of both Stevens’ Carrie and Lowell and De Augustine’s 2019 album Tomb. The squeak of steel strings is picked up on finger-picked acoustic guitars. Piano keys moan against the wood as they are delicately pressed so as not to overcrowd. On the album’s penultimate track, the ode to Jonathan Demme and Silence of the Lambs’ Agent Clarice Starling, “Cimmerian Shade,” you are able to hear where the idea for this project jumped from a Google Drive planning session to a lasting moment of beauty. The song unfolds over a gorgeous finger-picked guitar and mandolin, with both Stevens and De Augustine unpacking the character’s arc of outrunning shame and achieving self-acceptance. “I just wanted you to know me / I just wanted to love myself,” they plead in the chorus, “Fix it all, Jonathan Demme / Beauty resides where your spirit dwells.”

Supergroups and collaborative releases like this one generally tend to be more interesting on paper than they are in execution. They are sought after by completists in order to have the spine to point to on their record shelves, or listened to to fulfill the curiosity of casual fans. But with A Beginner’s Mind, Sufjan Stevens and Angelo De Augustine have stumbled upon a beautiful vocal recipe. This could be both a blessing and a curse, however, as it will be hard to hear either of their voices isolated on their own future solo projects and not think of how the other could have enhanced them with their presence. Some bells don’t need to be unrung. Like the quid pro quo made with a caged murderer in Demme’s Silence of the Lambs, the outcome is too important to deny.