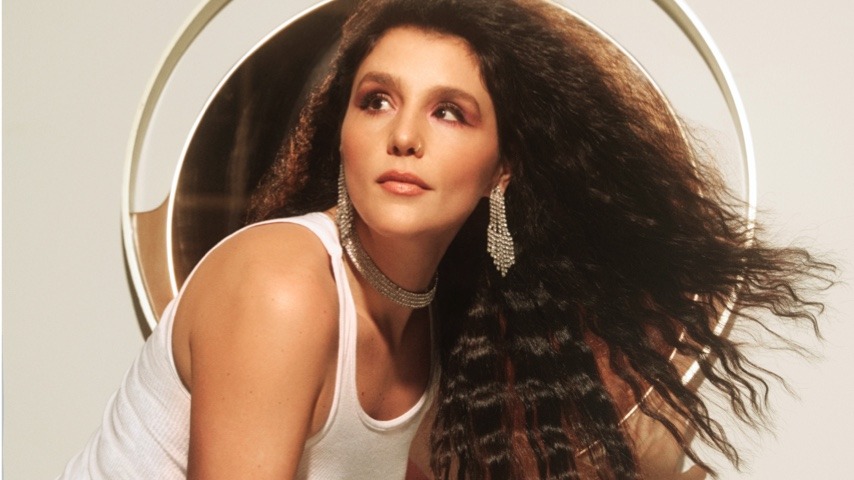 In these reflective, soul-searching post-pandemic times, there are some musical tones that dance-pop diva Jessie Ware has been looking back on with an unusual degree of fondness. The rubbery, ’80s-retro synthesizer textures of some of the material on her new fourth outing What’s Your Pleasure?, for instance, like the New Order-ish “Soul Control,” a Chic-funky “Ooh La La,” the “Beverly Hills Cop”-elastic “Read My Lips,” and a decidedly ABBA-reminiscent title track.

“I love those kinds of vintage sounds that you could say sound like cheese,” says the sultry British artist, who also co-hosts a popular food-themed podcast with her mother Lennie called Table Manners. “But I like the brashness, the flirtation of those sounds—they’re fun, and they really pack a punch. I wanted all of that for this record—I was greedy!”

But there are other noises that still continue to startle her as the world grows increasingly hushed, she adds with a shudder. In the new house that she’s recently moved into with her husband Sam and two young children, she reports, “There are loads of foxes, and they’re just going at it every night. And it is a horrendous sound, and I’ve heard it’s because foxes have spikes on their willies, but I’m not sure.” She pauses. “I think I’m going to Google this right now! But we’ve also got these amazing green parakeets and they make it all sound quite tropical in the daytime, and we have some very cocky squirrels, as well. So just the quietness of it all and being able to see nature has been something that I have really appreciated.”

She added up the challenges and unexpected blessings of the current clampdown in a candid recent chat.

Paste: How are your kids holding up as we all shelter in place?

Jessie Ware: I’ve got two now, I’ve got a three-and-a-half-year-old girl and a little boy who’s 15 months old. But you know what? My daughter is amazing, she’s brilliant. And to be fair, I feel like this time has been incredibly precious with my family, because usually I would have been here, there, and everywhere promoting a record, and this time around, we are stuck, all together, in a house. And don’t get me wrong — my nanny’s come back now—we’re allowed to have child care now—so she’s come back for a couple of days a week, and she’s super-helpful. So like today, as I speak to you, my kids are playing in the garden with our nanny, and I’m sitting here hiding from them—as much as I adore them—in our bedroom. And we’ll have pizza after this and we’ll hang out, and it’s just like… well, I dunno. I’ve gotten quite used to it, and I’ve gotten quite used to making music videos at home whilst nap time is going on, and doing TV performances in my daughter’s bedroom with a smoke machine that my son thought was like a sensory toy. So we just crack on.

Paste: Your video for “Save a Kiss” featured filmed submissions of fans dancing along. How were they selected?

Ware:We had professional dancers within that video, and they were assembled by my choreographer. But we also put out this tutorial and said that whoever wanted to contribute, could, so there were loads of submissions. And we’ve actually made a sound video which will have everybody in that entered, but that’s all part of the editing process — I let that happen with an editor. But I’m really touched that all these people even bothered. I guess everyone was just really bored and locked down!

Paste: But with Pleasure, you wanted to get back to your old nightclubbing, party-’til-dawn days?

Ware:Yeah. Absolutely. I needed this record. As much as I thought that my fans needed it, I needed to make this record for me, because it reminded me of how much I could enjoy myself again making music. I was in a bit of a funny spot with music, and I was having this really great time with my podcast, and I just needed to get that enjoyment out of my music again. So it kind of worked out as an absolute treat. It’s a shame I can’t tour it for bloody ages.

Ware:It was my idea. I don’t know how I ever thought of such an excellent idea — I didn’t realize what an excellent idea it was until I really started enjoying it. It was just one of those fluky things where I thought, “My mom is a great host and I didn’t actually appreciate how much people would enjoy the intergenerational aspects aspects of it all.” And my mom is such a force of nature, and she’s brilliant. And now everyone is kind of mad about my mother, and the podcast can’t really happen without her. And we put this cookbook out that did pretty well. And people have been cooking, people have had time to cook. But I didn’t realize how obsessed people were with food, like I was. I thought that I was just this weird person who really enjoyed talking about food. But people are just as obsessed as me, and it’s beautiful.

Paste: And you’ve had a cavalcade of cool, cool Table Manners cameos, starting with your friend Sam Smith and including Ed Sheeran, Nigella Lawson, even the Mayor of London, Sadiq Khan, who announced his run for re-election on your broadcast.

Ware:I’ve been a fan of Sadiq’s for a very long time, and he’s a very charming man who is really interesting. So it was wonderful to have him on, and to break his Ramadan fast with us. The guest stars feel very safe in our hands. But you long for those words, “I’ve never told anybody this before.” That’s fantastic when you hear that when you’re doing a podcast —a little exclusive is always great. But I coerced Ed into it because he already knows that my mom is a great cook. He’s eaten at my mom’s house before, because we were filming something to promote this song that we wrote together called “Sam.” So he’s just a good guy. And Sam Smith is a good friend of mine, and then Sam and Ed are good friends, so it all made perfect sense. But I loved learning that Sam didn’t know that Mexico wasn’t in Spain — that was one of my best podcast bits, ever, and it was hysterical. And we had Vanessa Williams on, and she was really interesting. And I love it whenever we get an American on there and they’re a singer. They always break into song. And us Brits are so conservative, we apologize for whatever our talent is. But Americans will just sing, like a whole performance, and it’s amazing. And we cook the meals, so our guests get what we give them, But maybe we should start having people bring their own food around, because we always hear about these amazing meals. I think that would be a good idea.

Paste: Is there one meal you can’t wait to chow down on once restrictions are fully lifted?

Ware: I can’t wait to go to this little place on the canal in London, the Towpath Cafe. I such an amazing restaurant, and you can sit outside and get beautiful cheese toasties with quince jelly, and it’s just great food. And I also want to go to an actual cocktail bar. That’s what I want more than anything.

Paste: And you’ve had other irons in the fire, too, right?

Ware:I had a [BBC] Radio 1 show for a bit, and that was really cool — I was one of the guest DJs on it. And I co-hosted that really respected music show “Later With Jools Holland,” and I adored doing it. I was a huge fan of his anyway. So I feel really excited that I’ve been able to do so many different things in the last year or so, and that they’re all so varied. So I feel really reinvigorated and excited that I’m able to carry on doing these things whilst also bringing out a new record. I think that everyone thought that maybe I’d stopped making music or something.

Ware:I was going out to clubs from about 16. I was going out raving, but only on the weekends. And then our friends had this regular drum and bass night, too. But yeah, I used to go out a lot, with a little gaggle of friends, and I adored it. It was so much fun.

Paste: But from its thumping opener “Spotlight,” to the closing “The Kill” and “Remember Where You Are,” your album kind of tells the chronological story of a night on the town from dusk to dawn.

Ware:Thanks so much — that’s a lovely way to describe it. I’d love to say that that’s exactly what it was, and we danced with that kind of concept, just different scenarios one would find themselves in. And I longed to be in that club atmosphere again. So as much as I adore my life, and I adore my family, and I adore being a mother, there’s that fantasy of being a stranger that meets another stranger in a dark club and the music’s thumping. There’s just something about that. So I’m living vicariously through these characters in my record.

Paste: And you’ve been joining BLM street protests in London, too, and taking a knee when appropriate.

Ware:And I think it’s woken up a whole generation. And what I’ve seen in these protests has been inspiring and beautiful and powerful, and I’ve been so impressed by how young these crowds are. There’s a need for change, and I’m there for it, and I’m going to try to play my part as best I can, using my platform supporting the cause. I even got my kids to help paint signs. But it really feels like change is definitely coming. So overall, I guess I feel inspired, I feel creative, I feel… desperate to make more music and write. And I understand that it’s not the case for everybody, but I’ve actually found this [pandemic] time to be really beneficial for creativity.