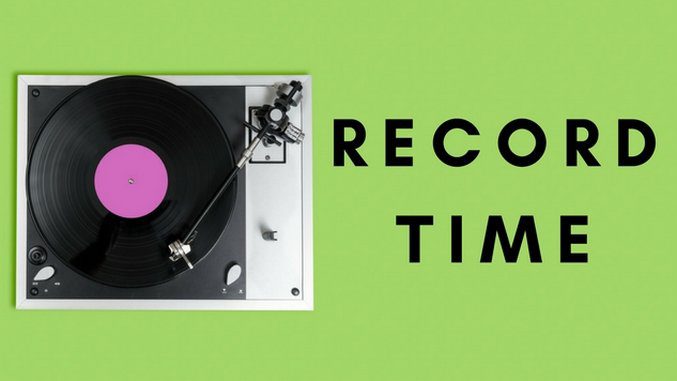 Record Time is Paste’s monthly column that takes a glimpse into the wide array of new vinyl releases currently flooding record stores around the world. Rather than run down every fresh bit of wax in the marketplace, we’ll home in on special editions, reissues and unusual titles that come across our desk with an interest in discussing both the music and how it is pressed and presented. This month includes two boxed set reissues of rock classics, hypnagogic pop from L.A. and one of the best albums of 2021.

The ’80s weren’t kind to many of the artists that grew out of the rock ‘n’ roll explosion of two decades’ earlier. But one of the few groups that managed to adapt and, as a result, get even bigger was the Rolling Stones. Nowhere is that more apparent than on their 1981 album Tattoo You. On it, the band slipped past the new wave and disco courting sounds of the previous two full-lengths and settled into a weathered take on blues-rock that best suited their rare chemistry. This deluxe re-release of Tattoo widens the canvas of the album considerably. The remaster of the original LP juices the recordings nicely, and it comes with a second disc of rare tracks from the album sessions that include “Living In The Heart of Love,” a scorcher that would have fit nicely in Tattoo’s tracklist, and an early version of “Start Me Up” that reveals its reggae roots. The jewel is a three LP set featuring a 1982 performance at Wembley Stadium. The Stones were ablaze throughout, ramping up the energy systematically before hitting the boosters on a breathless final run of songs.

The debut full-length from L.A. drone-pop band Dummy is the fulfillment of the promise whispered through the two cassette EPs they released in 2020. Those earlier releases feel, in retrospect, like a blurred version of what comes clear on Mandatory Enjoyment with their delightfully meandering NEU!-inspired instrumentals and shiveringly lovely vocal work. The new album brings a clarity to the music that opens up far wider vistas for the ensemble to play in. The quintet still wears their influences proudly out in the open (I hear elements of Pram, early American Analog Set and late Japan in the mix) but imbues them with a little more attitude and a touch of well-worn cynicism. Those darker edges to the sound are what give the music its bite and purpose. The chugging drum machine rhythm and chiming guitars of “Tapestry Distortion” wouldn’t work as well without the withered tone of the vocals, and the sun dappled tone of “Cloud Pleaser” needs the touches of discordance that creep into the mix.

Just as they did with the recent reissue of their third album Bossanova, indie rock icons Pixies are putting their 1991 release Trompe Le Monde back into circulation on wax with this anniversary edition. While a deluxe version with the b-sides from the era and maybe some other goodies would be nice, the album stands well on its own here. TLM was the beginning of the end of the first iteration of Pixies as bassist/vocalist Kim Deal was already pulling away to give attention to the Breeders, and the combo platter of exhaustion and tension within the group was becoming noxious. If that bled into the sessions, it’s inaudible on the finished album. Working once again with Gil Norton, the quartet sounds as sleek and steely as a rocket as they crank through Black Francis’ songs of space, sex, and Jefrey with one “f.” It all sounds phenomenal on this colored vinyl pressing, with the bass, drums, and percussion cutting through the mix with authority.

The inevitability of death doesn’t make a loss any easier to bear. That’s a thought that kept rattling through my head as I listened to the latest album from Haley Fohr’s project Circuit des Yeux. This new suite of songs was created by the artist in the wake of a friend’s death and recorded as she stared down news reports of thousands of people dying unnecessarily during the pandemic. Both realities fueled Fohr’s exploration of grander compositions. She’s joined throughout by a lush, multi-tracked string section, rumbling horns and stormy percussionists. Swarming through the musical backdrop is Fohr’s massive voice—jumping octaves to desperate lows and staggering highs—taking on lyrics that speak to a world that is slowly melting into a man-made oblivion. One of the most awe-inspiring albums to be released this year—and one that I’m going to be returning to regularly during the winter months to let it urge me along toward a hopeful springtime of renewal.

With the catalog for his brilliant pop project World Party in his control, Karl Wallinger has been steadily re-releasing the various albums he released under that name on wax. That welcome turn of events has finally resulted in a re-release of the group’s masterwork Goodbye Jumbo. Released in 1990, the album was a lush, thoughtful expression of fear for the state of the planet and its inhabitants leavened by moments of awestruck wonder at the beauty and bounty surrounding us all. The new master of this work—as well as the vinyl, sleeve and insert—is much thicker than the original release. Wallinger’s command of the stereo field (just listen to how he splits up the vocals and instruments in “Way Down Now” to create a dense fog of jangle pop) comes into tighter focus and the volume boost makes the messages of the songs feel more insistent and energizing.

Loveland Duren: Any Such Thing (Edgewood)

The music of Loveland Duren is the welcome clashing of two musical aesthetics. Van Duren came of age in the Memphis power pop scene, collaborating with members of Big Star and Sparks as he went. Fellow singer-songwriter Vicki Loveland grew up steeped in country and gospel music. Since connecting in the early ‘10s, the pair have found a wonderful middle ground where her smooth twang meets his guitar crunch and the music that results is warm and enriching. The duo’s third album Any Such Thing also comes on the heels of a documentary about Duren, the release of which found the two bouncing around the world to support it. It only drew their creative efforts closer together as this new LP bears out. The album flows with purpose, keeping the emotional temperature high on songs like “Funny Way Of Showing It” and “Within Crying Distance,” without ever letting it boil over into histrionics. And it’s delightful to hear them indulge in the string arrangements on “Funny” and the joyous percussion clatter on “Skywriting.”

Just in time for your Halloween soundtrack needs comes this horrorcore classic from Memphis posse Three 6 Mafia. Originally available on wax only in a promo edition that is selling online for triple digits, Vinyl Me, Please has given it a wider release and pressed on season appropriate orange/black swirled vinyl. The album also serves as a great marker for the end of Three 6 Mafia’s first great era. This would be the last record featuring all the original members. And it found the group at a career peak, creatively and commercially. Smoke is packed with tunes that roll by with the slick wonder of a bodybuilding competition. Each member of the group pushes the rest to go for broke in their rhymes, with even the guests (UGK, Twiztid, Big Gipp) getting into the fun with lyrics aiming to strike the strongest blow or elicit the loudest gasp of shock. I’ll gripe about the noise of the colored wax another time. I’m too busy spinning “M.E.M.P.H.I.S.” and “Whatcha Know” on repeat.

The influence of the so-called yacht rock genre can be challenging for any artist to embrace, toeing, as they do, the thin line between schmaltz and inspiration. Denver duo Little Trips do it right, tastefully folding in elements of ’70s soft rock into their very modern art pop. The songs on this humbly self-released debut let the airiness of America and the shimmer of vintage Fleetwood Mac smooth over the music’s spikier edges and cap it all off with Greg Laut’s feathery vocals. What they could have used was a better pressing plant for the vinyl version. The mastering feels all over the place; noisy and crackling in some spots, unbalanced in others. Wax is an appropriate medium for their sonic mix of old and new, but it needs to be treated with far more care.

Fresh from the experience of making Monster, arguably the group’s loudest record, and surviving the aneurysm that felled drummer Bill Berry, R.E.M. were feeling confident in their abilities as a band. So much so that they decided to use the off-hours of their 1995-96 tour to craft the material for their next album, 1996’s New Adventures in Hi-Fi. The volume and drive of Monster remained but it was kept in check with songs that felt closer to the dark, jangling spirit of Automatic For The People. They sought such ground later, but it was only on Adventures that they reached it and planted their flag with the smoky beauty of “E-Bow The Letter” and “New Test Leper,” and the oxidized crumble of “The Wake-Up Bomb” and “Binky The Doormat.” While the deluxe CD version of this 25th anniversary re-release is packed with bonus stuff, the vinyl edition sticks to the original tracklist with some nicely fattened sound. It’s more than enough.

The lockdown album has become a cottage industry in popular music. But there hasn’t been a release yet that has captured the unsettling sensation of empty streets, silent businesses and that haunting disconnect of being separated from loved ones as the latest from U.K. ensemble Vanishing Twin. Truth be told, they had a bit of a leg up on this front as their previous LPs were already immersed in a nostalgic pop sound that calls up visions of half-remembered Tomorrow People episodes or warped Moog demonstration albums. These haunted pop tunes were created in a small bubble by the four members of the band, utilizing spaces like Cafe OTO and their own Studio Ovo, and the music feels as cozy and borderline claustrophobic as being sequestered for months on end. It’s the perfect backdrop for lyrics that touch on magical occurrences, lunar wonders and, on “Tub Erupt,” the obsessive anxiety that befell so many of us during the pandemic (“Don’t let the thoughts at the back of your mind / Slide too far down your spine / They’ll come back and eat your heart alive”).

A true indicator of the strength of a songwriter’s work is how well their material stands up to it being remixed or adapted for other genres or styles. If the songs survive the transition, it’s as close to a classic as you can get. Paul Weller’s work withstands such adaptations. In 2001, the singer-songwriter toured Europe, playing solo versions of tunes from throughout his already abundant catalog. In their stripped down form—just Weller and a guitar—the songs burst with the same soulful energy and feel just as heartfelt as when he’s surrounded by the members of his various bands. Some, like “Science” (from 1997’s Heavy Soul), the title track to his 1993 album Wild Wood, and “Down In The Seine” (from The Style Council’s 1985 album Our Favourite Shop) benefit somewhat from the minimalist performances and the touch of gravel in Weller’s voice. The only concerns are the slight distortion that sits around the edges of each tune that a better mastering job might have helped put a damper on. It’s not enough to ruin the joys of this release; just enough to set my spine slightly on edge.