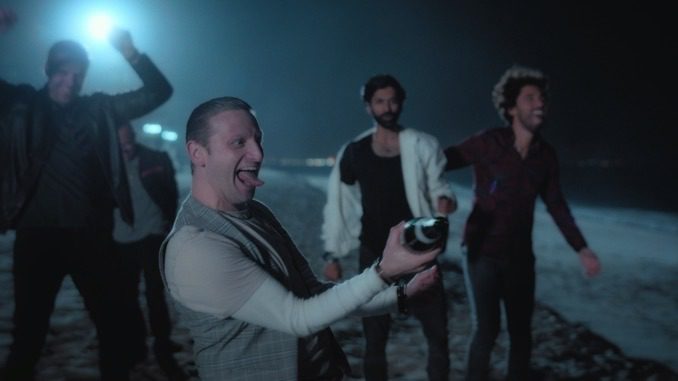 Happy I Think You Should Leave Day to all who celebrate! Tim Robinson’s beloved meme factory of a Netflix sketch-comedy show debuted its second season in the wee hours of this morning (we were awake and regret nothing), and many dedicated fans have already flown through its six new episodes. Indie rock enthusiasts who did so may have noticed a familiar voice in the second episode’s “Baby Cries” sketch, in which Robinson’s character looks back on his days as, and I quote, “a piece of shit”—he and his “Dangerous Nights Crew” enjoy a round of “sloppy steaks” and then pop bottles on the beach.

The soundtrack to this very silly sequence, Netflix confirms, is a song titled “Dangerous Knife (The Night Is A Knife),” performed by Vampire Weekend frontman Ezra Koenig, and co-written by Koenig and frequent Vampire Weekend collaborator Ariel Rechtshaid, as well as I Think You Should Leave co-creators Robinson and Zach Kanin. What a cool collision of worlds!

Koenig slyly acknowledged the song via his Instagram story, posting a pair of screencaps from the sketch:

Prior to this song, Koenig wrote and recorded a track called “I Promise You” for the 2018 animated family film Peter Rabbit. Vampire Weekend released their last album Father of the Bride in 2019, and followed that up with this year’s 40:42 EP, which features two 20-minute (20:21, to be precise) reworks of the FOTB track “2021” by Sam Gendel and Goose.

No word yet on whether “Dangerous Knife (The Night Is A Knife)” will receive any sort of official release, but we’ll update you if and when there is. In the meantime, check out our review of I Think You Should Leave Season 2 here, our ranking of all 53 of the show’s sketches here, and Vampire Weekend’s 2007 Daytrotter session down below.