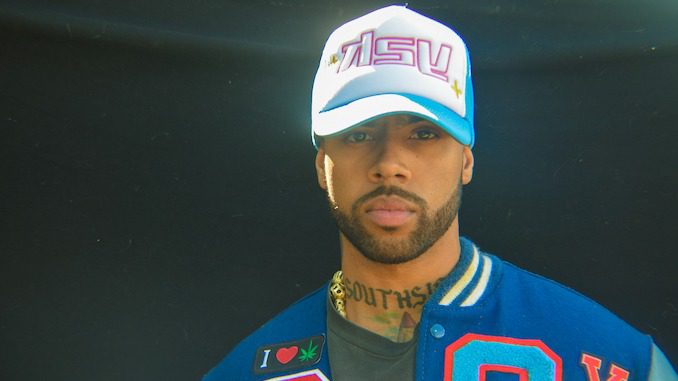 When Vic Mensa’s INNANETAPE hit the internet in 2013, he was propelled into the rap stratosphere at only 20 years old. It contained the perfect formula for an effective mixtape, beaming with love for his city, as shown through collaborations with fellow natives such as Chance the Rapper and BJ the Chicago Kid. Almost a decade later, Mensa has a lot under his belt. From a successful tour with J. Cole and a coveted spot on XXL’s 2014 Freshman Class List alongside Isaiah Rashad, Chance the Rapper, Ty Dolla $ign and more, to touring with Justin Bieber and obtaining the rare Weezer feature on his debut studio album The Autobiography, Mensa’s crossover appeal has made him a lasting figure in hip-hop long after the rap blogs’ domains expired.

With one foot in the mainstream and the other planted firmly in the Chicago underground to which he credits his career, Mensa is indebted to the city that made him. Now, fresh off of revisiting INNANETAPE in full at Riot Fest in Chicago, Mensa is returning to the city’s Hyde Park to run the mixtape back once more. In the Instagram announcement for the show, Mensa wrote, “This mixtape kept me alive, as I know it did for so many other people.” With a more mature outlook on life and the thirst to evolve his artistry even further, the 28-year-old rapper reflects on the building blocks of his career.

Below, listen to “The Taste” and read our conversation with Vic Mensa. You can purchase tickets to his Oct. 21 performance of INNANETAPE here.

Paste: Talk to me about your latest single “The Taste.”

Vic Mensa: It’s based on a poem I wrote about the taste of Chicago. I was in the studio earlier this summer and I had Papi Beatz with me. He produced a lot of my music in the past and had made some beautiful guitar-based songs that we’ve written. I wanted to do something like that, so we went outside and wrote this poem about the taste of Chicago, and about the energy of summertime. I’m thinking about Baba’s lemonade and rollerskating at the rink. My homie Malik Yusef was there, as well as two friends of mine named Charity and Taylor. I met Taylor on 53rd Street. She sometimes stands on the corner with a speaker and a mic, just busking. I’ve always loved her voice, so I started talking to her one day and they came to the studio that day or the next day. That’s basically how it came together.

Paste: Do you write poems a lot?

Mensa: I do everything. I write poetry, prose, screenplays, essays. I just write! My studio is filled with notebooks on top of notebooks of random writings, from free writing to critical dissertations.

Paste: Going back to Chicago, there’s still a stigma around it, although it’s changing. How do you feel about it and respond to it?

Mensa: That one-dimensional view of Chicago is still prevalent and I respond to it by showing the multiple sides of the Chicago experience, because there is truth to the things that people fear so much about the city. Yet it’s not the entirety of the truth. I’ve tried to present Chicago through my eyes as a microcosm as a pit of inspiration, artistic energy, heritage and culture, like every hood in the U.S.A. Chicago is an epicenter of so much of what’s going on globally.

There is a duality to everything. On one hand, the world is afraid of Chicago and they know it’s extremely violent. America is extremely violent. On the other hand, the world is inspired by Chicago, oftentimes by things born from that violence. Even Ghana has a poppin’ drill scene! They’re making amazing drill music in the native tongue of my father. That is directly born from Chicago. Drill is born out of what they’re afraid of, but it’s taking the world by storm. Chicago is a city with a unique identity, but in many ways, it’s a real representation of the urban Black American experience. You don’t get this beautiful music and dance and art without the pain, trauma and struggle.

Paste: Essentially, it’s a fetishization of the culture where people separate the pain from the entertainment.

I was thinking today about the deep appreciation that Europe has for jazz music and all forms of Black music. Oftentimes with art and Black music, historically, those artists have grown fatigued with the burden of America and they’ve gone to Europe. Europeans have kept a lot of jazz musicians alive over the years. They marvel over this music and art and I think they may see themselves with a certain objective distance from the pain inflicted upon the artists, being that they’re not from the American South, cracking whips. Obviously, those wonders of Europe are built on the backs of colonization and slavery.

I think that particular relationship is a mirror for the way that the world salivates over the Black American experience. It’s fetishization but also appreciation. I don’t think the two are mutually exclusive. As an artist, you do end up in uncomfortable positions at times when you realize that these people don’t love you. They might like what I’m doing, but they don’t love me any more than they love LeBron James. If he wasn’t playing basketball or wasn’t supernaturally talented, he could get dragged out of his car and killed by the police.

Paste: A lot of Black musicians are speaking up about their music being consumed by white people and non-Black people. How do you feel performing for white audiences?

But I know what you’re talking about with artists examining the ways that their music is consumed by white people. Black artists examined that and it’s nothing new. Miles Davis turned his back on the crowd. I respect that. I think everybody views their creations in a different way. For me, I see my shit as applicable to every human being. If my music does something for you, it’s a blessing and I greatly appreciate it. I would want rural Appalachians and Trump supporters to sit and live with my music so they could open-mindedly experience the things I have to say and where I’m coming from. It might present the world to them in a different way than Fox News. And I could get money. That would be tight.

Sometimes I do wonder if the people that do listen to my music actually listen. My music is blatantly politicized. It’s difficult for me to understand or ask.

Paste: Like Republicans and how much they love Rage Against the Machine.

Mensa: Rage is so blatant! I could see that they mix Zack’s vocals pretty low, but in the first album, lyrics like “some of those that work forces are the same that burn crosses.” Clear as day! There is no way to not know what the fuck that means. Then again, what we think is obvious, the general populace doesn’t take the time to really experience music as critically as we do. They might just hear a guitar riff.

I never try to underestimate the audience because there are so many brilliant people who listen to my music. I go to Rap Genius and I’ll see people make connections and dissections of lyrics I never even thought of. I’ve seen people give really profound meanings to things I didn’t even think twice about.

Paste: Do you enjoy explaining your music?

Mensa: I like explaining what it means! I tend to put a lot of thought into it, and there are many lines that I’ve spit or references that I’ve pulled that many people never know. I put time into everything I do.

Paste: Seeing as you rep Chicago so hard in your music, some may be surprised to know you went back and forth between Chicago and Los Angeles before moving back home. How was it out there?

Mensa: I feel like my experience in L.A. was not creatively feeding me. I feel it’s misguided to categorize L.A. as fake. That’s Hollywood. Some of the realest people I’ve met are from South Central or Inglewood. They are some of the most genuine and talented people. It never became my home, though. I don’t hate it by any means, it’s beautiful, but Chicago is my home. I got tired of living around straight white people. It dawned on me that I wanted to live around Black people, so I moved back.

Paste: Did anyone get upset when you moved out of Chicago?

Mensa: I don’t think I got any pushback! The narrative has always been that when you get some money, you’re supposed to move out of Chicago. You have to leave to become successful. I think now we’re rewriting that narrative, but for a long time I blindly subscribed to it.

Paste: Going off your influences, you have definitely evolved into a more punk side a bit, which was fun to see. Do you have any surprising influences?

Mensa: A few years ago, I was really into a band called Leftöver Crack. I’ve always been into The Clash and Prince. Maybe not the most surprising, but I listen to a lot of Fela Kuti and soul music. I’ve been collecting records for 15 years so I’ll just be listening to lots of Roberta Flack and Stevie Wonder and Gil Scott Heron. I also love Sonic Youth and the Red Hot Chili Peppers. Nirvana, too!

I was only about rock and roll when I was a little kid. I didn’t understand hip-hop yet because the world didn’t treat me like a Black man yet. Once that started to happen, hip-hop made perfect sense to me. I have a white mother, so I did not feel very racial as a little kid. I was into hair metal, too. I even recently introduced Ty Dolla $ign to Sgt. Pepper’s Lonely Hearts Club Band.

Mensa: He was super inspired! I was also putting him on to Plastic Ono Band. I’m always in that bag.

Paste: Do you feel you’ve changed over the years?

Mensa: Even in the span of our conversation, something far more on my mind now is the intentional use of my words. I’ve always been someone who takes hard stances and jumped in front of many trains for the things I believe in. With time and experience, I’ve come to learn that what I say is sometimes less important than how I say it. I’ve learned to be far more intentional and less antagonistic because now I want to do it on purpose. I learned that being judgmental and passing judgment brings that upon you. The truth is always the truth. I won’t stop being a truth teller, but I aim to be more effective.

Paste: Finally, as you prepare to perform INNANETAPE in full, what would you say to The Vic, who released it?

Mensa: I would tell him to hold onto that spirit. That tape was made out of creativity and love. The intention behind it was so pure. Hold onto that.