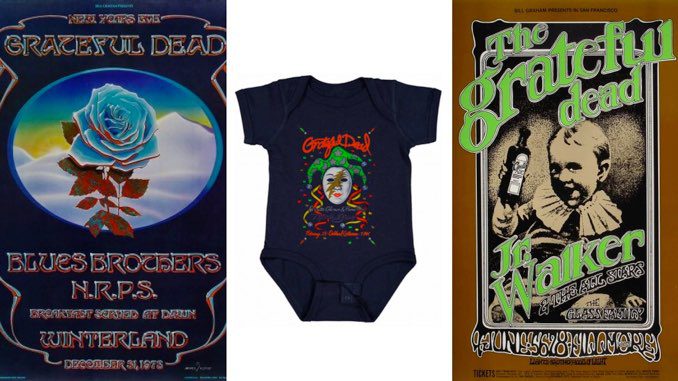 One of the most devoted fanbases in all of popular music, Grateful Dead fans pose a unique challenge at holiday gift-giving time. If you know someone who’s into the band, it’s a no-brainer that you can start there in your search for the perfect stocking stuffer. By the same token, Deadheads tend to be a discerning lot, which means that seeking out a gift for all but the most casual supporters is going to require a great deal of thought. Given the breadth of the band’s history, the sheer volume of recorded material and the robust bootleg trade that continues to this day, it can be daunting to try and zero-in on actual music that the Deadhead(s) in your life would want. In many cases, that would require some intensive sleuthwork to inventory the recordings they already own.

Thankfully, Wolfgang’s is ready to make your job as Grateful Santa a whole lot easier with an abundant selection of Dead-related merch and memorabilia—including posters, photo prints, t-shirts, postcards, tour programs and other assorted goodies, most of which have been price-slashed for holiday savings of up to 60%.

Here are 10 items bound to bring some holiday cheer to a Deadhead near you.

’Tis the season to reminisce about New Year’s Eve shows past, and this heavy-hitting lineup from December 31st, 1978 was the last concert to ever take place at the storied Winterland Ballroom. Also on the bill were The Blues Brothers (yes, those Blues Brothers, the alter-egos of superstar comedians John Belushi and Dan Aykroyd and their crack band), along with New Riders Of The Purple Sage. At the stroke of midnight, balloons filled the arena as promoter Bill Graham, dressed as Father Time in a wire-suspended prop shaped like a giant joint, sprinkled confetti and real joints into the crowd below. The Dead then broke into their classic “Sugar Magnolia” and proceeded to play for five and a half hours, after which Graham treated the 5500 in attendance to breakfast.

From September 25th—October 14th, 1980, the Dead played a series of 15 dates at San Francisco’s legendary Warfield Theatre. All of those dates began with an acoustic set followed by two electric sets. The re-introduction of the acoustic format to the band’s repertoire, this Warfield homestand kicked off an acoustic/electric period, setting the stage for the first time since 1970 that the band featured acoustic instruments on tour. An eight-night stand at New York Radio City Music Hall would follow closer to Halloween, and recordings culled from the Warfield and Radio City shows would make up the albums Reckoning and Dead Set, which respectively captured the acoustic and electric sides of the band.

It’s hard to think of a more practical gift that also says “I love you” better than a coffee mug. If you’re looking for something you can bank on your giftee actually using, Wolfgang’s currently features two sturdy, beautifully-colored mugs that the Grateful Dead fan in your life can get maximum mileage out of. The first is a deep blue mug decorated with the aforementioned Warfield poster, and “the second”:
https://www.wolfgangs.com/mugs-and-glasses/grateful-dead/mug/BG216-MG.html is a striking yellow mug to match artist David Singer’s iconic mushroom poster for the Dead’s February 5th, 1970, appearance at the Fillmore West with blues giant Taj Mahal on the bill. With his use of cut-out magazine images across several different decades, Singer’s approach stood out from the visual style we most often associate with the psychedelic era, while also adding his own touch that was in-line with the overall aesthetic spirit of the time. The yellow mug featuring Singer’s poster subtly communicates that you recognize the giftee is a person of discerning tastes who marches to the beat of their own drummer, while you just can’t go wrong with the blue mug and the timeless appeal of the Warfield poster.

An ever-dependable gift, Wolfgang’s t-shirts come in a head-spinning variety of designs printed on a selection of bold, eye-catching colors. Featuring screenprints from Wolfgang’s treasure trove of fine-art show posters, these tees aren’t available anywhere else, and they’re made from some of “the softest fabric you will ever put on your body…butter washed for an unrivaled, deliciously soft feel.”

If you know someone who’s looking to start their child on the journey to fandom as early as possible (or maybe you would like to nudge someone else’s child on that journey), Wolfgang’s has you covered with a vintage onesie featuring a design by artist Harry Rossit, who joined the Bill Graham Presents stable in 1991. This onesie comes in—count ’em—five sizes: newborn, 6 months, 12 months, 18 months and 24 months. And in case it bears repeating: Woflgang’s apparel is made from some of “the softest fabric you will ever put on your (or your baby’s) body…butter washed for an unrivaled, deliciously soft feel.”

Rock photography doesn’t get any more iconic than Gene Anthony’s 1967 portraits of the Dead taken both inside and on the front steps of 710 Ashbury Street, where the band lived at both the physical and temporal epicenter of the hippie movement. A Bay Area native trained at the California School of Fine Arts, Anthony framed the band—and the objects around them—much like a classical painter in careful pursuit of a portrait that would preserve its subject for the ages. Indeed, not only would this photo look right at home in an art museum, it also looks so lifelike that it gives you a sense of being transported back in time, as if the moment had been preserved so well that you could step into the frame. With the Summer of Love literally unfolding outside his apartment window, Anthony arguably etched a permanent place for the Dead in the pantheon of rock with this one photo shoot. He also helped establish a visual language that photographers would emulate for decades to come—so much so, in fact, that this style of photo defines how we see musicians in our collective mind’s eye.

With a lineup featuring saxophonist/singer Junior Walker (a Motown artist during the ’60s who would go on to play live with Foreigner in the ’80s), this June ’69 appearance was advertised with a poster design by Randy Tuten, the longest-tenured artist of Bill Graham’s hugely influential stable. In contrast to some of his peers, Tuten work reflects a playful edge, along with his tendency to avoided “heavy meaning” in his work. By contrast, his drafting skill and discipline gave this poster an innately classic feel with echoes of late 19th-century and early 20th-century newspaper ads.

More than a quarter-century after his passing, Jerry Garcia endures not only as the spiritual center of the Grateful Dead as a band, but also of the Dead phenomenon and, arguably, an entire movement. This in-concert action shot by photographer Ken Friedman subtly captures so many of the qualities that made Garcia’s guitar playing, singing and overall presence so integral. The bespectacled eye of a hurricane that’s remained in a state of perpetual motion, Garcia had a gentleness about him that belied the mind-bending intensity of his inimitable guitar playing. Friedman’s photo, which depicts the face of the Grateful Dead smiling in his native element, reminds us that Garcia possessed a lyricism in his fingertips that comes along but once in a generation.

Another live photo by Ken Friedman, this shot of the band from May of 1982 speaks to the sense of camaraderie and grace that defined the Dead’s live shows throughout their career. Though their musical alchemy is admittedly difficult to capture with a camera, anyone who’s ever felt drawn to collecting and cataloging the band’s bottomless supply of live recordings will instantly resonate with this photo.

When you want to say more with less, Wolfgang’s features over a dozen postcard-sized reproductions of its famous poster designs. With both first-run and second-run prints available, several of thesecards were printed back in the day for actual use as handouts before the shows they advertise. Card stock and dimensions vary slightly, but if you’re looking to draw gasps with the perfect stocking stuffer, look no further than Wolfgang’s selection of vintage postcards.