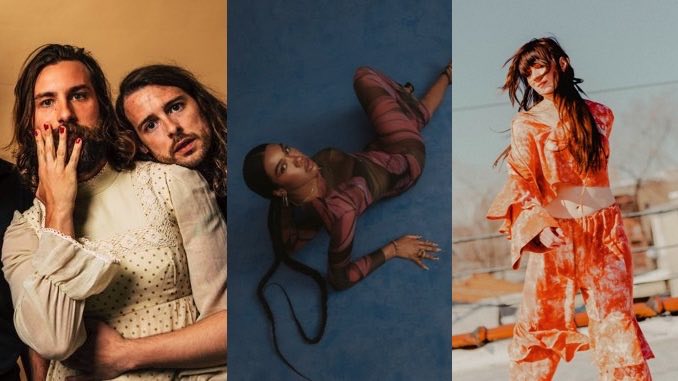 September is becoming October as we speak, with a major month of new releases to look forward to. But at the moment, we’re focused on the past week’s new songs, narrowing dozens down to a must-hear top 10. Standouts include the statement-making lead track from IDLES’ next record, our latest preview of Amber Mark’s debut, and Haley Fohr’s latest Circuit des Yeux single, but all these sounds need to be in your ears. Jump in below.

Amber Mark: “What It Is”

Almost four years after the release of her second EP Conexão, New York-based singer, songwriter and producer Amber Mark announced her debut album, Three Dimensions Deep, out Jan. 28, 2022, via PMR/Interscope. To provide a sample of the forthcoming release, Mark also shared her fourth single from the album, “What It Is,” following “Worth It,” “Competition” and “Foreign Things,” the last of which ranked among Paste’s top tracks of August. Drenched in R&B influence, “What It Is” approaches the genre with a soulfully electronic twist, Mark’s voice reaching soothing highs and suave lows. With an intimate backup chorus and stout, chromatic beat, “What It Is” is highly addictive, so much so that one may not realize Mark is revealing her troubles. Despite often singing about her woes, she charmingly wraps her sadness and reflections up in a skillfully tied bow. —Ana Cubas

Venezuelan producer Arca seeks to test the boundaries of music and what is seen as acceptable, playing with ear-shattering frequencies and rumbly bass with hints of bubblegum-pop whimsy. On her latest track “Incendio,” co-produced with Omar, Arca showcases her rapping skills. She bursts into ecstatic belts and playful ad-libs as she raps of blood running through the streets and Matrix references, in true Arca fashion. As she gears up for what appears to be the follow-up to 2020’s KiCk i, Arca continues to challenge both her audiences and herself. —Jade Gomez

Montreal quartet Corridor are back with their first new material since 2019’s Junior, the reliably hooky jangle-rocker “Et Hop.” What’s old is new again here, as the French-Canadian four-piece actually wrote the track during their Supermercado (2017) sessions, only to consign it to the shelf. Released now in celebration of University of Montreal studio-run radio station CISM’s 30th anniversary, “Et Hop” blends the sharp angles of post-punk with jangle-pop’s warm charm. Corridor make riff-driven, effortlessly melodic rock sound easy, stating an obvious case for the confidence with which they topple the English language barrier. —Scott Russell

Chicago-based composer and singer/songwriter Circuit des Yeux (Haley Fohr) shared a third single from her forthcoming Matador Records debut, -io, ahead of its Oct. 22 release. Fohr describes “Vanishing,” appearing now alongside a self-directed video, as “an account of climate change and loss through the final stage of grief.” It’s no surprise, then, that “Vanishing” is an existential gut-punch, in which Fohr strives to accept that human civilization has reached “the goodbye point.” Over an epic arrangement of strings, brass and woodwinds, as well as rock guitars and drums, Fohr sings, “Goodbye hands touching where it hurts / Goodbye laugh tracks of ancient works / Goodbye thought, goodbye dog,” like the most devastating possible riff on Goodnight Moon—like Goodnight Earth. For all its apocalyptic drama, the song ends on the smallest of images, from which Fohr still manages to wring outsized beauty: “Goodbye to the puddle in the ground / We didn’t know each other well, but you were my mirrored sky.” —Scott Russell

Philadelphia noise-punk four-piece Empath have released their first new material in two years in the form of “Born 100 Times,” out now alongside a music video. It’s the band’s first original music since the 2019 release of their acclaimed debut album Active Listening: Night on Earth, and their signing to Fat Possum Records soon after. True to form, the band’s new track runs the gamut of rock sounds—the dart of a descriptor I’ll throw at it is “psych-punk,” between its woozy guitar riffs, hyperactive bass line and double-time drums. Catherine Elicson’s lyrics, delivered with live-wire energy, question the worth of suffering—”You learned at an early age to celebrate your heart ache,” she begins, asking in the choruses, “Is this the power you thought you had?” It’s a challenging question, embedded in brain-rattling rock: Is it more difficult to suffer in silence, or to advocate for yourself? —Scott Russell

Houston rapper Fat Tony is a master storyteller, exploring the relationship between identity and place in his music that evokes joy, pain and curiosity. On his newest single “Ain’t For Me,” Tony pushes against the American Dream as he tells of a Black family moving out of the United States while facing opposition from friends and family. Tony channels a sense of desperation, embodying a father just seeking to provide his family with security by any means necessary. —Jade Gomez

Floating Room’s “Shimanchu” is a ripper, digging into the micro-aggressions singer Maya Stoner faces as an Indigenous Asian-American woman. The song shifts from a brooding lull into a seething rage with crashing drums and chugging guitars, taking on an added meaning in the wake of the recent unspeakable attacks against Asian-Americans. Revolving around the powerful chorus “I’m an islander / But I’m away from my island / So I am the only island here,” Stoner and Floating Room touch on painful subjects through the lens of revenge and anger, seeing it as a necessity in the face of oppression. —Jade Gomez

After wiping their socials and teasing the phrase “In spite of it all, life is beautiful” on billboards, English outfit IDLES made it official and announced a new album. CRAWLER, coming Nov. 12 on Partisan Records, is their fourth studio LP, following their acclaimed, U.K. album chart-topping 2020 effort Ultra Mono. The 14-track, Kenny Beats-co-produced (!!) album’s details are out now alongside the video for lead single “The Beachland Ballroom,” a tribute to Cleveland, Ohio’s historic music venue of the same name, as well as “an allegory of feeling lost and getting through it,” as frontman Joe Talbot explains. “The Beachland Ballroom” is a statement-making first preview of IDLES’ new material, introducing a heavy dose of soul into their pummeling, sneering sound—an unlikely swerve the band pulls off, in both surprising and satisfying fashion. Talbot blends his usual harsh barks with plaintive crooning (blending both on lines like “Made me sway, made me sway, made me sway!) over an understated backbeat, organ hum and electric guitars that spend most of the song tightly coiled, only occasionally exploding outward. Meanwhile, Talbot’s dynamic vocal performance opens a window into the band’s rapid rise to fame: “Soon as the rush went away / I did not look for a way / Damage, damage, damage,” he cries. The accompanying, one-shot music video is equally unflinching, as an extreme-closeup Talbot professes his pain directly into the camera. —Scott Russell

“In the Garden” is the latest dreamy psych-pop jam from Jacksonville, Florida’s LANNDS, released alongside a music video this week in honor of their signing to Run For Cover Records. The duo—vocalist Rania Woodard, a queer Black woman from Memphis, and producer Brian Squillace, a North Caroline native—deliver an intoxicatingly airy track that winds its way around your brain with gentle insistence. A smooth, quietly surreal piece of production that draws its power from Woodard’s self-assured vocals and Squillace’s ethereal soundscapes—accented by bird chirps and neon-streaked guitars—”In the Garden” is pleasantly hypnotic through and through. —Scott Russell

Manchester electronic trio Marconi Union, i.e., Richard Talbot, Jamie Crossley and Duncan Meadows, will release their new album Signals via Just Music on Nov. 5. The second single from their forthcoming Dead Air follow-up, “Blowback” begins as a single droning note and ascendent synth figure, with live drums, trebly guitar noodling and keening strings propelling the band’s spacey explorations further and further into the unknown. It’s a Rorschach test of an instrumental, reflecting steadfast determination just as easily as resigned surrender—Marconi Union are content to craft an evocative atmosphere, leaving ample room for the listener to find their own way through it. —Scott Russell