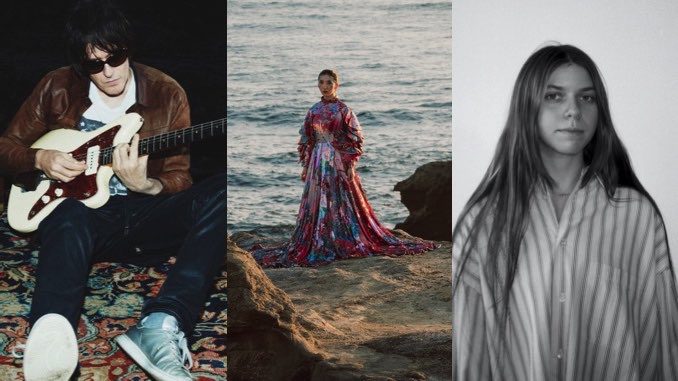 A third of 2022 has already fallen off the proverbial calendar, and though that feels fast, it’s also befitting of all the killer music this year has seen so far. Many of the albums below were not yet on our radar when we first took stock of 2022’s most exciting releases to come, and some took us entirely by surprise (lookin’ at you, SAULT). Here, a space-rock epic rubs elbows with a choral and classical odyssey; a maximalist collection of J-rock and -pop neighbors a sparse art-folk singer/songwriter record; a sleek electronic coming-of-age tale follows a hard-rocking emotional gut punch. These are the April albums that the Paste Music team just couldn’t shake, and the reasons why. Take a look and a listen—or 10—below.

Listen to our Best Albums of April 2022 playlist on Spotify here.

Billy woods requires patience to wade through dense raps that shine an uncomfortably bright light on life and its flaws. Add in Preservation’s production, which similarly comes from multiple reference points, and you get Aethiopes. Woods shifts in and out of perspectives, keeping listeners on their toes for a challenging, illuminating experience. With an impressive feature list that includes everyone from Boldy James and Quelle Chris to Despot and El-P, woods peels back his mythos a bit more, and allows his skill and humor to shine alongside other brilliant minds. Aethiopes is woods at some of his most uninhibited, allowing himself to slip through the cracks in pursuit of taking risks. —Jade Gomez

One of Paste’s most-anticipated releases of April, Skinty Fia simultaneously finds Fontaines D.C. excavating their pasts and forging their futures. The London-via-Dublin quintet have been inundated with acclaim since first rising out of the crowded U.K. post-punk field—their 2019 debut Dogrel was nominated for a Mercury Prize, their 2020 follow-up A Hero’s Death for a Grammy—yet they’ve responded by delving deeper into the dark, growing ever more purposeful as sonic architects while continuing to wrestle with their Irish identities—and their erosion—through their songwriting. Grian Chatten and company made their intentions for their third record clear on lead track “Jackie Down the Line,” melding menacing, character-driven lyric narrative with grunge-y, propulsive rock, a potent combination with which Skinty Fia overflows. The record is named for a curse, but it feels closer to an oath, like Fontaines D.C. swearing they’re here to stay. —Scott Russell

Japanese singer, songwriter and “poetry rapper” Haru Nemuri aimed to create a feeling of “tension and compactness” on her second full-length album, Shunka Ryougen, but tried to hone that narrowness through an expansive 21-song collection that spans an array of genres and moods. Even if most of the album is sung in Japanese, the complex soundscapes she sings (and frequently screams) over transcend all language barriers. “I am now able to create sounds that are further closer to the ideal,” she said in a statement accompanying the album. “When I have ideas for songs, I am just an intermediary to help bring them to life. I strive to fulfill that role.” Within the specific vision she aimed to execute, Nemuri widens the frame and zooms out to pull from hip-hop, hardcore and avant-garde, building an elaborate, often cathartic monument to her creative muse. —Elise Soutar

Kathryn Joseph: for you who are the wronged

Always intense, insular and eerily pretty, the work of Scottish songwriter Kathryn Joseph may require a focused, sit-down listen to truly appreciate, but the payoff is worth it. Her third album for you who are the wronged is no exception, using mostly keyboards, minimal ambient percussion and the gentle warble of Joseph’s voice to toe the line between the harrowing and the sweet with ease. For all of the horrors she pulls out and condemns on songs like singles “what is keeping you alive makes me want to kill them for” and “the burning of us all,” there is also obvious love pouring from every note, letting the listener find comfort in Joseph’s creation even as the world seems to silently burn down as each track starts. “When the teeth sink in your skin / I’ll suck the poison out,” she promises on sinister-sounding lullaby “flesh and blood,” wrapping those left vulnerable up into the fabric of her work, letting them hear their experiences reflected in her thoughtful, intricate songwriting. —Elise Soutar

Unable to access the kinds of spaces he’d used to record his previous album as PENDANT, Through a Coil, and thus unable to replicate its guitar-based, rock-inspired sonic palette, Los Angeles songwriter Chris Adams was forced to shift his usual creative approach. This ended up being something of a blessing in disguise, as it afforded him the ability to take his already-refined musical techniques into a sphere in which he could operate with a beginner’s mind, embracing synthesizers to form a singular world. Throughout Harp’s 13 tracks, Adams demonstrates a respect and appreciation for the art and history of electronic music. At times, the album feels like taking a tour through the discographies of the genre’s most iconic practitioners—like on the exuberant “Rights For An Angel,” which functions as a not-so-subtle tribute to the legendary Burial, but with the undeniable injection of Adams’ aesthetic eye and talent that livens the track to stadium-sized heights. Similarly, it’s hard not to hear the influence of Human After All-era Daft Punk or early Justice in the striking chords of “Latex Heart” or the vocoded crooning vocals on “Eventless Horizon.” Wherever Adams chooses to let his influences shine through on the album, he juxtaposes these impulses with his own deft hand, leading to wonderfully unique results that usher his references into the modern age. —Jason Friedman

If PUP hadn’t already called an album Morbid Stuff, Albany’s Prince Daddy & The Hyena could have easily slapped that title on their latest. Vocalist/guitarist Kory Gregory’s thanatophobia (or death anxiety), exacerbated by the band’s near-fatal 2018 touring van crash, inspired their third, self-titled album, and its emotionally and instrumentally overwhelming rock. This record is not for the faint of heart: Haunted by a dark figure called The Collector, Prince Daddy & The Hyena is a stormy sky that rays of sunlight only occasionally penetrate. “Let’s give it a fresh start tomorrow / Let’s try to shine like El Dorado,” Gregory howls on the poppy “El Dorado,” only to then warn, “Symmetry don’t come easily,” while on the heavy punk of “Hollow, As You Figured,” the vocalist somehow fashions his submission to The Collector’s will into the feel-bad song of the summer. Prince Daddy & The Hyena aren’t particularly interested in silver linings, preferring to face the dark clouds head on and dare the listener to look away. But if you can connect to—or at least hang with—their harrowing songwriting, you’ll find a hell of a rock record here. —Scott Russell

London-based duo Real Lies possess a nocturnal aura about them, slinking into the night as flies on the walls of their city’s backrooms. Lad Ash centers around the main ethos of dance music: unity. On “Boss Trick,” Kevin Lee Kharas reflects on fleeting moments of intimacy as he says, “I felt like I was part of something.” Kharas’ spoken word poises him as a narrator in his own coming-of-age story, telling stories over Patrick King’s wistful electronics. First kisses are weighed with as much love and care as London’s doldrums. Real Lies’ Lad Ash is a loving breakup letter to the past, and its ashes are spread on the dance floor. —Jade Gomez

You never really know what to expect from each release with mysterious U.K. neo-soul outfit SAULT, whose previous full-length Nine made last year’s Mercury Prize shortlist. Still, even fans who have watched their every move so far couldn’t have seen a cinematic choral/classical tour-de-force like Air coming. Released without any sort of real announcement or promotion (aside from a handful of cryptic posts on the group’s social media accounts a day prior), Air’s seven tracks make full use of their lush orchestral arrangements, swerving between the bombast of songs like closer “Luos Higher” and the title track’s graceful restraint to round out a versatile collection of songs. The record’s 12-minute centerpiece “Solar” sounds like what the album cover looks like, lifting you in a bubble above the Earth to serve as your soundtrack to watching the planet rotate. Endlessly surprising and often breathtaking, Air is a reminder that SAULT can take any shape they decide to and, more likely than not, will blow us away with said shape every time. —Elise Soutar

Spiritualized: Everything Was Beautiful

To follow Jason Pierce through an album’s length of psychic exploration requires a level of acceptance that things may look different once you re-enter your own tangible reality. There is no amount of pre-flight orientation that will prepare you for the Fantastic Voyage-style plunge you will take in his best work with Spiritualized. These expeditions through the chemically altered corridors of his soul have historically taken a toll on Pierce. After the last Spiritualized album, 2018’s And Nothing Hurt, he cast doubt on whether he had the strength to keep returning to these outer regions of the soul for answers. But after four years of re-acclimating to terrestrial life, Pierce is back for the ninth Spiritualized album, Everything Was Beautiful. The result is nothing short of a revelation, as Everything Was Beautiful marks another career-best in Spiritualized’s euphoric discography. —Pat King

Tomberlin: i don’t know who needs to hear this…

In recent years, there’s been an influx of musicians embracing minimalism. Often, the lack of excess can lead to these songs being dismissively tagged as “sad,” particularly if the artist dares to fill that space with any emotion at all. One of the finest practitioners of this sparse musicality is Sarah Beth Tomberlin, who performs under her surname. Her 2018 debut album At Weddings drew comparisons to ambient icons like Grouper and staples of contemporary indie like Julien Baker. Her new album, i don’t know who needs to hear this… is grander than anything she’s done before, but rarely does it feel like a departure. Recorded in Brooklyn with producer Philip Weinrobe, known for his work with Adrienne Lenker and Buck Meek, the record features contributions from Shahzad Islamly and Told Slant’s Felix Walworth. Where At Weddings was written without a goal in mind and carries that homespun air, the deliberateness of the songs on idkwntht is palpable. At the record’s heart is Tomberlin simultaneously embracing self-love and acceptance (“born again runner”), and taking love away from toxic influences (“collect caller”), no matter how difficult both acts may be. Results aren’t the point; it is simply the act of trying and holding space for one’s emotions that counts. —Eric Bennett

Listen to our Best Albums of April 2022 playlist on Spotify here.