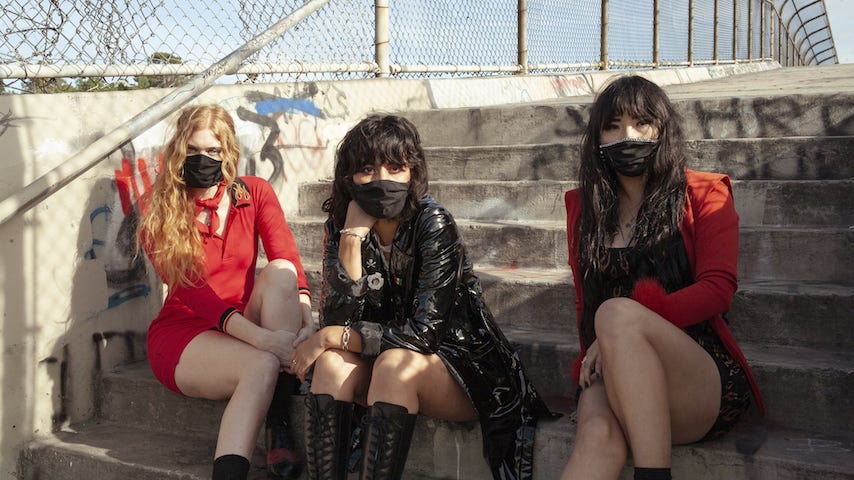 California rock trio L.A. Witch have announced the details of their second album Play With Fire, and they’re sharing its first single “I Wanna Lose,” exclusively with Paste. Play With Fire is out on August 21 via Suicide Squeeze, and it follows their 2017 self-titled debut. The new track also comes with a lyric video animated by Bradley Hale and featuring the album artwork by Future Shock.

They’ve revived their stoner rock and gothic punk sounds on “I Wanna Lose.” Cloaked in their characteristic reverb, it’s a tantalizing yet humble track about accepting defeat in order to progress. The essence of this band lies in their ability to pick their battles—when to deeply give a fuck and when not to—it’s what makes their songs sound liberating. If these lines aren’t enough to empower you, there’s also their freeing classic rock snarl and blown-out riffs, which should do the trick.

“‘I Wanna Lose’ is about feeling free and feeling stronger because you’ve lost everything and now you’ve got everything to win,” says lead vocalist and guitarist Sade Sanchez. “It’s about being a punching bag in a martyr-like way, and losing a fight to move on.”

As they’re (normally) a busy touring band, L.A. Witch had just two months to write their new record, so they basically holed up for all of January and February to knock it out, only to be stuck inside for much longer than they expected due to the pandemic lockdown in March.

“Play With Fire is a suggestion to make things happen,” Sanchez says of the new album. “Don’t fear mistakes or the future. Take a chance. Say and do what you really feel, even if nobody agrees with your ideas. These are feelings that have stopped me in the past. I want to inspire others to be freethinkers even if it causes a little burn.”

Listen to “I Wanna Lose,” exclusively via Paste below, and scroll down to view their album artwork and tracklist. You can preorder the album here.