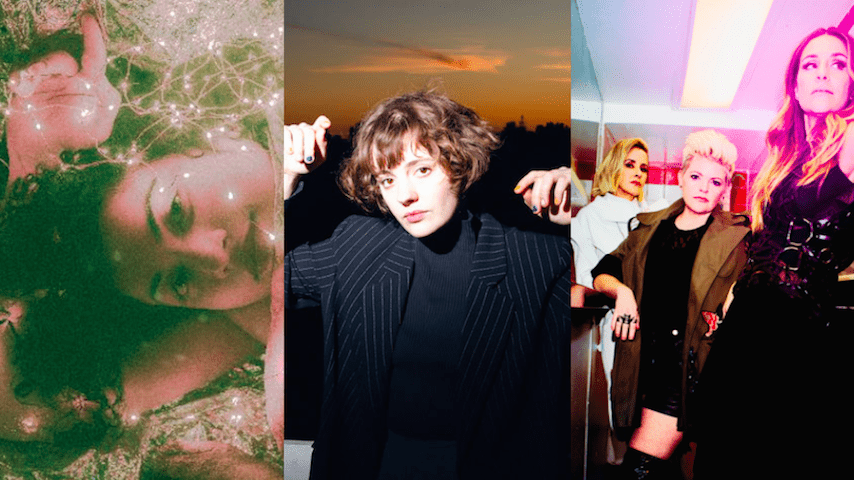 Often we remember our summers based on the music we associate with those sunny memories. As July comes around, it’s pretty obvious that our memories will likely be shaped more so by the pandemic than our music listening habits, but even so, we hope you find a handful of albums that bring you joy and comfort during this uncertain time. If you’re too busy to keep up with all the changing album release dates—fear not, we’ve done the work for you. If you’re looking for a record to fall in love with this July, look no further than our list of most-anticipated LPs of the month.

New Zealand indie rock quartet The Beths will release their sophomore album Jump Rope Gazers on July 10 via Carpark Records. The band shared the first single from the forthcoming album, “Dying to Believe” along with a vintage infomercial-inspired music video. “Dying to Believe” is a welcome return from The Beths, featuring frontwoman Elizabeth Stokes’ signature songwriting that is both introspective and clever. The music video for the song, directed by Callum Devlin, is a mock “How to be The Beths” instructional video, featuring clunky instructional text and a fuzzy picture quality reminiscent of VHS tapes that one might watch via a TV on wheels back in an early 2000s high school health class. Jump Rope Gazers follows The Beths’ 2018 debut album Future Me Hates Me, which put the band on the map on a global scale. In fact, the success of the album has had the band in a period of almost perpetual globetrotting while on tour. Much of Jump Rope Gazers grapples with the prospect of being far away from home while also having a hunger to flourish in one’s craft. —Natalia Keogan

Kllo: Maybe We Could

The melodic drum and bass ballad is a lost art these days. But with Kllo, Melbourne-based cousins Chloe Kaul and Simon Lam bring back shades of sounds that captivated an underground subculture in the late ’90s and early ’00s and styled it for modern ears to appreciate what they may have missed decades ago. It’s been three years since their stellar Ghostly International debut Backwater dropped, and Lam and Kaul almost disbanded Kllo after two years of touring led to focusing on their solo work (Nearly Oratorio for Lam and Chloe Kae for Kaul.) But tracks like the feverishly intellitronic “Somehow” and the lovelorn, downtempo “Insomnia,” have Kllo building on the ethereal drum and bass-inflected dance music with full steam ahead. —Adrian Spinelli

Dehd is one of those once-in-a-while bands. The Chicago trio made up of lead vocalist Emily Kempf, guitarist Jason Balla and drummer Eric McGrady have a sound that’s tricky to nail down, and, in 2020, they are one of the most distinct new rock acts around. They created some buzz with their 2019 album Water, and their new album Flower of Devotion feels like a natural and commendable step forward. Check lead single “Loner” for evidence: New wave-y guitar swarms around smooth-sailing feedback and a drum machine all to a polished, ever-so-catchy effect. If “Loner” is not enough to convince you of this band’s emotional and sonic talents, just wait until you hear the full album. Flower of Devotion finds these three people—particularly Kempf and Balla, who used to be in a romantic partnership—exploring relationships and friendships from new angles. Happiness and despair exist alongside each other. “Being alone and grieving is very isolating,” Kempf said in a statement. “But then you come out of your little cave of grief, and your friends and family and partner are all there to pat you on the back and hold you until you have to go back into the cave of grief alone.” —Ellen Johnson

It’s a new era for the Dixie Chicks. It’s so new, in fact, they changed their name to match it. Following peers like Lady Antebellum (now Lady A), the Dixie Chicks dropped the “dixie” from their name due to the racist connotations associated with the Civil War-era word and are now going by the to-the-point title, “The Chicks.” But don’t think for a second that this changes the Dixie Chicks’ core—the same spitfire you love on Fly is alive and well in the singles for their new album Gaslighter, which was moved from its original release date in May, presumably due to coronavirus concerns. “Gaslighter” is an in-your-face banjo banger that decries abuse, “Julianna Calm Down” is a pep talk that will hit you right in the feels and the most recent “March March” is a fierce country protest song (in many country circles that may seem like an oxymoron, but never for The Chicks). The Dixie Chicks were once a disgraced act, but they never deserved the ostracisation they received. They’re back for blood. They’re back for justice. They’re back to make lots of noise. And they’re back just when we need them most. —Ellen Johnson

What makes Liza Anne an especially talented songwriter, are the many different ways in which she delivers her messages of empowerment and self-realization amidst clouds of depression. 2018’s Fine But Dying was one of the year’s sneaky best albums, and Bad Vacation sees Anne flowering out of the dark places she found herself in back then. She’s freely electrifying on “Devotion,” keeps her wits about her on the tongue-in-cheek “I Shouldn’t Ghost My Therapist,” glistens on the sparkling pop of “I Wanna Be There” and stares her darkest demon in the face—herself—on the gorgeous melancholy pop of “Terrible Discovery.” Anne has always come across as carefree, yet impactful, and when addressing one’s own mental health, her music is sure to help others find brighter skies ahead as well. —Adrian Spinelli

The word “prolific” is tossed around in music criticism like a frisbee at a Fourth of July barbeque, but few artists truly exemplify the kind of voluminous output that word implies. The Massachusetts-based Lori McKenna is one of those worthy artists. Her forthcoming project, The Balladeer, is her 11th LP in two decades. But look beyond her solo discography (which is, to be clear, next to perfect), and you’ll find McKenna has been even busier. She has Grammy awards for writing songs for Little Big Town (“Girl Crush”) and Tim McGraw (“Humble and Kind”), plus songwriting credits for numerous other artists like Miranda Lambert, Carrie Underwood, Little Big Town, Tim McGraw, Faith Hill, Hunter Hayes and Reba McEntire. But it’s in her own personal work where emotions and stories are conveyed most thoughtfully. As our critic wrote back in 2018, “Every Lori McKenna album has at least one song that will make you cry—and depending on who you are, and where you are in life, it could be any of them that gets you choked up.” In the course of these last 20 years, McKenna has focused deeply on whatever stage of life she found herself in: marriage, family, children, etc. The Balladeer finds her exploring those same themes but with the added layer of even more wisdom. “I’m at the age now where you can see really well where you’re going, because you’re helping your parents and you’ve lived through what your kids are doing,” McKenna says. “It’s this weird emotional time where you’re like a bookkeeper, writing it all down, trying to make sense of it and add it all up somehow.” —Ellen Johnson

Irish rockers Fontaines D.C. came out swinging on their debut album Dogrel—it became one of Paste’s favorite albums of last year thanks to its propulsive rhythms, Grian Chatten’s mesmerizing speak-sing and their satisfying blend of post-punk, garage and surf sounds. After cementing themselves as one of the most exciting new bands of 2019, excitement began to swirl when news started circulating about a quick follow-up album that was recorded in Los Angeles and influenced by The Beach Boys. I figured an album full of surfy tunes like Dogrel highlight “Liberty Belle” and 2017 b-side “Winter in the Sun” was on the way, which I undoubtedly would’ve devoured, but that’s pretty far from what we’ll actually receive at the end of July. A Hero’s Death is decidedly not perky—it’s full of somber, gothic numbers, slow ballads and a few very on-the-nose nods to Brian Wilson (but this is dejected Pet Sounds era Beach Boys—not the carefree “Surfin’ U.S.A.” Beach Boys). It’s not what many will expect from the group, but it’s a noticeably more mature second chapter that pays dividends with each listen. Sprinkled with ’60s armchair pop and ’80s post-punk references, this is a gloomy outdoor stroll record—but a very special one at that. —Lizzie Manno

As she prepares to release her third LP, Oakland’s Madeline Kenney is building a consistent and downright exquisite body of work. The singer and multi-instrumentalist co-produced Sucker’s Lunch with Wye Oak’s Jenn Wasner and Andy Stack, and Kenney has tightened her role in a bicoastal clique that has been spawning intriguing indie pop from Durham, N.C. to the Bay Area. On “Double Hearted,” Kenney’s synths and vocals soar in wavelengths as she sings, “voices get me high…!” on the hook, alongside Stack’s rhythmic percussion and Wasner’s unmistakable bass. Kenney’s first two albums showed skill and promise, but there’s something bolder and lasting building on Sucker’s Lunch. —Adrian Spinelli

KIND, the sophomore album from Montreal’s Thanya Iyer, is anything but ordinary. Harps swell, synths bubble, choirs radiate, and beats contort—it’s a mystifying, quelling trip whose subject matters are as equally rich and complicated as its song structures. The album melds avant-garde pop with jazz, psych and electro-pop, and it sees Iyer (who serves as the lead vocalist and bandleader) explore the deeply personal and universal. Iyer describes it as “a journey filled with questions that travel around grief, depression, anxiety, racism, disability, chronic pain, healing, self love, and giving that love outwards to the relationships around you.” While they traverse individual and collective struggles in their lyrics, the band stuns on similarly small and large sonic scales—dramatic brass and sinister strings collide with silky vocals and subtle percussion. Their varied time signatures and all sorts of bells and whistles will keep you on your toes as songs gracefully transform out of nowhere—intergalactic imagination and wonder turns to equally intriguing doom on “Alien,” and avant jazz minimalism becomes skittering electro-pop on “Look Up to The Light.” It’s a masterclass in detail. —Lizzie Manno

Most likely, your impression of Mike Polizze is skewed by his psych-garage-noise releases under the name Purling Hiss—an especially fitting band name if there ever was one. But the Philadelphia singer/songwriter decided to tone things down and make an acoustic album with the help of frequent collaborator Kurt Vile and producer Jeff Zeigler (The War on Drugs, Allison Crutchfield, Steve Gunn) for his solo debut. You won’t find any meandering guitar screeches on Long Lost Solace Find—but these meditative sounds will still take you down some worthwhile trails. Delicate guitar fingerpicks dance around Polizze’s inspired vocal hooks—the off-the-cuff nature of his voice (not at all dissimilar from Vile’s) makes everything sound so effortless, but the melodies are incredibly hearty. Its light (but not over-the-top) twang and Polizze’s grizzled warmth are a match made in heaven—especially during these summer months. —Lizzie Manno