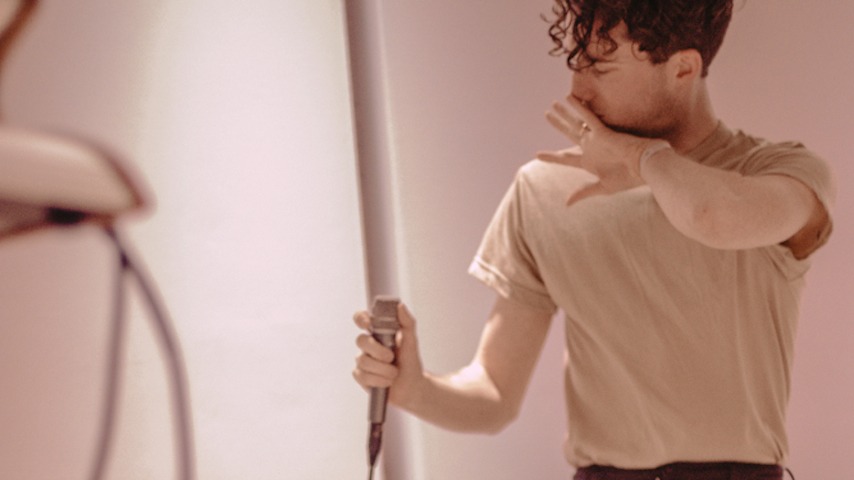 There’s something special about an artist whose music reaches the full potential of a particular genre while also transcending it altogether. That can be said about Nirvana with grunge, Miles Davis with jazz, My Bloody Valentine with shoegaze and so on. One could also add Nation of Language to that list, with respect to new wave music.

The Brooklyn-based band, led by vocalist and songwriter Ian Devaney and featuring his wife Aidan Devaney on keys and Michael Sui-Poi on bass, unleashed Introduction, Presence last month, and it’s crowned them as the most exciting new synth-pop act in years. The band has been releasing invigorating, ’80s-indebted singles for about five years now—tracks like “I’ve Thought About Chicago” and “Reality” are undoubtedly direct descendents of Pet Shop Boys, A Flock of Seagulls and Orchestral Manoeuvres in the Dark, but there’s also a subtle glow that recalls 21st century anthemic indie rock à la Arcade Fire, The National and The Killers. While their decade-spanning influences can certainly be scavenged, their songs always sound bigger than them—Devaney’s songwriting feels essential and eternal.

It might not be the best time to release a highly-anticipated, highly-danceable album, but Introduction, Presence resonates in kitchens and cars just as well as it would in the animated bars of New York City. Ian Devaney is currently sitting by the bedroom window in his Brooklyn apartment, which overlooks an alley full of weeds that have grown far larger than normal. “It’s kind of sad actually,” Devaney says. “Over the last couple weeks, I’ve watched them grow from little tiny weeds into big bushes. It’s my little bit of nature.”

Like most of us, he’s feeling strange about the present circumstances, but his album release date was something to look forward to, and it also happened to be his 30th birthday. During quarantine, he’s been pinging between instruments, recording equipment, video games and books, which are all set up near him so he can simply “follow [his] spirit.”

Nation of Language formed in 2014, around the same time Devaney’s previous band, The Static Jacks, dissolved. The Static Jacks toured internationally and released two albums of garage rock-tinted indie-pop, and although Devaney hadn’t yet found his feet, you can hear his knack for songwriting and budding interest in 1980s pop (see “Mercy Hallelujah” and “Katie Said”). With Nation of Language, Devaney didn’t start from scratch with hopes of becoming the next big buzz band—the group simply came from a place of musical experimentation.

“I didn’t think of it as ‘I’m starting a new band,’” Devaney says. “It was just an exploration of trying to write a different style song than I had been writing for years. Even after we had played a couple of shows, it wasn’t a very serious thing until Aidan joined the band. She’s a very ambitious person and wants to go out and play, and that made me believe in myself and the music more.”

While Devaney says making the music was quite a deliberate process, their debut album itself just sort of happened.

“‘Indignities’ has been out for a while, but when we recorded it, I didn’t so much think, ‘We’re piecing together an album,’” Devaney explains. “It was just like, ‘We’ve got enough money that we can go do this, so let’s get in there and make a song.’ I had a certain amount of unreleased material that felt like it lived so well with these things that we had released earlier that I was like, ‘Let’s just call this a bundle of our early works.’”

Introduction, Presence is satisfyingly 10-tracks-long, and it’s essentially a greatest hits album—excluding only the stirring early single “I’ve Thought About Chicago,” which was curiously left off the tracklist. Despite its compilation feel, it has mindful sequencing. The first half is exhilarating—almost like they wanted listeners to be fully impressed right from the jump. You can’t hear “Tournament” and “Rush & Fever” without imagining a crowd hanging on its every beat with their bodies intuitively swaying and eyes blissfully shut. Then comes the peak of this record’s poignant nostalgia, “September Again” and “On Division St,” followed by the rhythmic post-punk glory of “Indignities.” The latter half of the album is a bit more spacious and varies more in tempo and style, but it doesn’t conclude without one more life-affirming dancefloor filler, “The Wall & I.” It’s all packaged so thoughtfully, and it leaves you wanting more.

Devaney said he’s always striving to write something as good as LCD Soundsystem’s “All My Friends,” and you can hear nods to Brooklyn’s dance-punk gods and that wide-eyed NYC pulse rushing through nearly every song. However, he pushes back against the idea that Nation of Language are a distinctly New York City band. Yet, it’s still hard not to imagine Introduction, Presence as a soundtrack to the lives of New Yorkers who feel both uplifted and quashed by the mythology of the city.

“I think those are big brushes that I used to make the record—that hopeful melancholia thing,” Devaney says. “I think New York probably amplified that, but I think that’s maybe part of the reason I was drawn to live here in the first place—the hopeless, never-ending struggle aspect.”

Nation of Language sound refreshingly out of step with the gentrified Brooklyn scene’s trendy bedroom pop and tired art-punk acts, but they never felt a part of that world to begin with.

“We’re down south of Crown Heights and Lefferts Gardens, and so there’s this feeling of being in Brooklyn and a part of the action, but also very much separate from it,” Devaney says. “I think that’s probably good for me because if I lived right in the middle of everything, I might not leave myself the time to actually work on the music and just spend all my money hanging out with people. Just being in Brooklyn is a very important thing to me—just something about the fact that when you look around, it feels like people are pursuing something and striving for something. It’s inspirational and makes me want to get back to it.”

Devaney likes the primitive quality of early new wave, when artists were only just scratching the surface of the possibilities of synthesizer-based music. It wasn’t overly technical, but it still transmitted emotions in a way that was quite profound. When Devaney shifted from writing indie-pop tunes to new wave ones, he liked the idea of not fully knowing what he was doing, but he’s not worried about losing that charming novice quality that so many bands struggle to maintain beyond their first few records.

“There are so many different options out there for different ways of creating music using a synthesizer, that I think between that and the fact that I’m not very good at guitar or bass means that there will be that sort of beginners’ touch for quite a long time,” he says.

Their transcendent sounds intersect with a thematic brooding that’s an equally integral part of Nation of Language. Devaney gets rained on in the album’s opening scene (“And that’s fine / I’m wasting away / I took the long road home and it never paid off for me / But to feel the proof as I’m walking around the city / In a torrent of rain”) and later finds himself paralyzed by time on “September Again.” Later, he’s somehow still trudging forwards on “Automobile”: “In a landscape harsh and thick / Thick with the dreams that you never quite kicked / You carry on for a long time.” His lyrics are marked by a deep romanticism and an ever-shifting relationship to nostalgia, and it’s these universal struggles that make his songs so towering.

The blurred image on their debut album cover is a bit enigmatic, but as Devaney explains it, it’s actually a perfect microcosm of Nation of Language.

“I thought about the fact that our live show is a very energetic and hectic thing, but still confined within the bounds of these very rigid drum machines,” Devaney says. “I found an old picture from a disposable camera from years ago and I don’t know exactly what it is. I think I was either trying to take a picture of something and someone moved in front of the camera or I was trying to take a picture of someone and they moved out of the way at the last second. But it’s certainly a person passing by.”

Just like this figure fading out of sight, Nation of Language are reaching for something that’s slipping away. They’re simultaneously crushed and enlivened by the past, present and future, and their songs sound scientifically engineered for beginning and end credits. As long as there’s a desire to reminisce or forget one’s memories altogether, Nation of Language are there to be the sublime soundtrack.

Introduction, Presence is out now. Read our review here.

Lizzie Manno is an assistant music editor, Coldplay apologist, bread obsessive and lover of all things indie, punk and shoegaze at Paste. Follow her on Twitter @LizzieManno