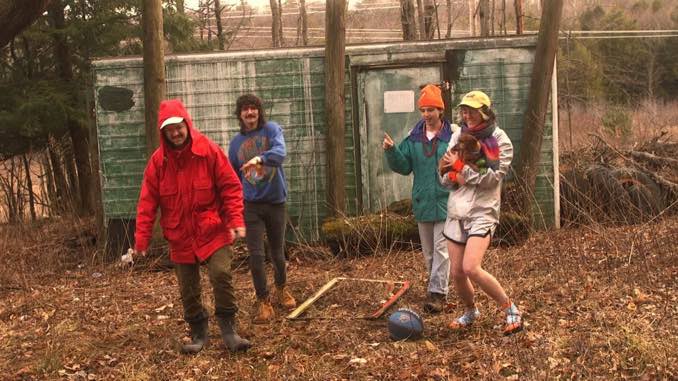 Another Michael have shared their first new single of 2022, “Water Pressure,” out now on Run for Cover Records. The release follows the Philadelphia-based band’s acclaimed first full-length New Music and Big Pop, which Paste praised as one of 2021’s best debut albums.

“Water Pressure” is a lovely, acoustic guitar-driven tune that radiates gratitude and acceptance, zeroing in on those small, fleeting moments when everything just feels right. “One thing’s for sure, I sure am lucky / This is who I’m gonna be,” Michael Doherty begins, harmonizing beautifully with Alenni Davis over their cheery strums and Nick Sebastiano’s steady bass. “I’m just burning up some CDs for my friends /
Icing up my broken heart again,” Doherty and Davis sing as the song moves through its heartfelt highs and lows, soaking up each flicker of joy while always wondering, “Why do good times sneak up on me?”

Doherty says of “Water Pressure” in a statement:

“Water Pressure” speaks to feeling optimistic, and taking a shower. It’s when you feel like things will start working in your favor, and you’re enjoying the company of others with the thought that things will be alright. It is a special feeling that sometimes will only come around once in every 100 days. Like, I’m staying at a random someone’s house in Lincoln, Nebraska, and the shower has really good water pressure. I’m so happy to be here.

Another Michael have a handful of U.S. shows on the horizon, including a headlining show in Troy, New York, tonight (April 25), and a pair of Brooklyn performances supporting Bad Moves and Hinds on April 30 and May 26, respectively. The band plan to announce more tour dates soon, per a press release.