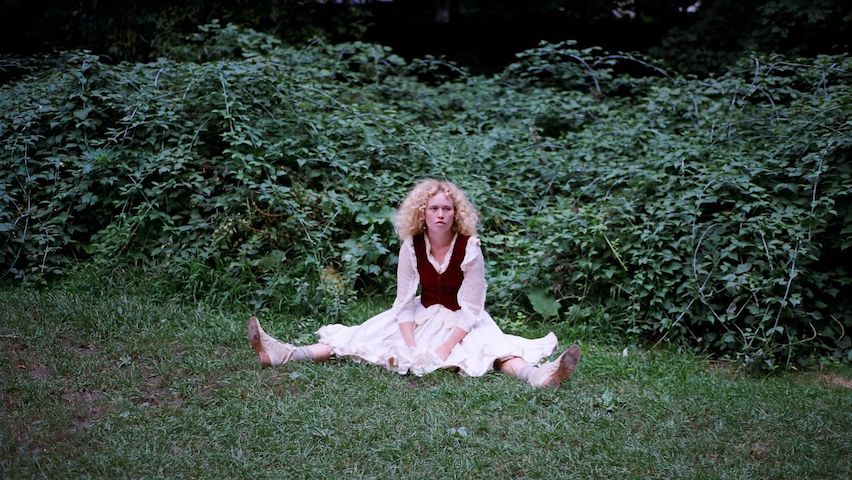 Toronto-based musician Caitlin Woelfle-O’Brien is gearing up for the release of her current musical project Blunt Chunks’ self-titled EP (out May 6 via Telephone Explosion), and has shared a second preview with new single “BWFW.” The follow-up to lead single “Natural Actors,” which harnesses a more abrasive, early-2000s pop-punk-inspired sound than its predecessor, arrives with a visualizer.

Produced by David Plowman (The OBGMs, Islands) and Nathan Burley (Young Clancy), the EP is littered with features from heavy-hitters, including contributions from Scott Hardware and members of Broken Social Scene, The Weather Station, Luna Li and Hooded Fang. Where “Natural Actors” embraced smooth piano and angelic voices joining in on the chorus, handling the tale of her collapse with grace, Woelfle-O’Brien isn’t afraid to get messier in the best sense on “BWFW.” “When I’m with you / I’m alone,” she asserts on the chorus, questioning where her relationship with her significant other can go from here and coming to the conclusion that it’s probably not going to work over aggressive, grungy backing. “Am I going backwards or forwards with you?” she finally asks in the song’s bridge, giving the song its title acronym and rethinking her next move over an onslaught of crashing cymbals and grinding fuzzy guitars that feel fit to soundtrack the world falling apart.

Woelfle-O’Brien shed some light on the writing and recording process in a statement:

I wrote this one while in Berlin in 2019. I was visiting a lover and he really made me feel unwanted. I ended up leaving his place and staying at a friend’s warehouse art studio where I was much freer to create. I had gone out to Berghain and ran into his friends and ended up joining them at a concert… and I was secretly doing drugs in the bathroom alone because I felt so out-of-place and insecure. That was a “teetering on the edge of mental-breakdown” kind of night.

I wrote the song the next day in the warehouse with all that anger and sadness. Originally the song was much more grungy and Nirvana-esque on a de-tuned open tuning, but as we produced it we drew on the Avril Lavigne vibes. This was a really fun, epic recording process. It’s an obvious SMASH lol, so we were all really excited to get our pop-punk dreams fulfilled and just go all out. Vocals are from the studio demo because I happened to have a strong vocal day so we just kept those. I wrote the second verse on the spot the day we recorded the demo, as originally it was just one verse.

Check out the visualizer for “BWFW” below. You can pre-order Blunt Chunks’ self-titled EP here.