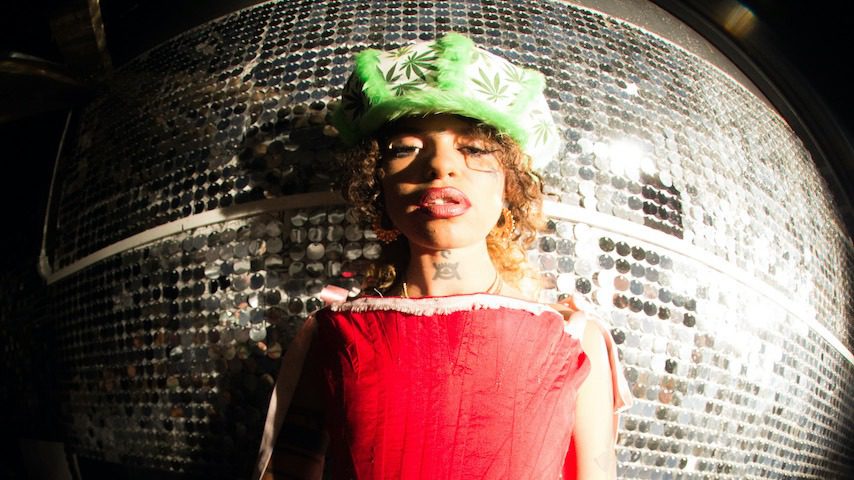 For many people such as myself, our first introduction to Greentea Peng was her COLORS performance. Her jewelry tinkers around her body against the muted green background as her molasses-like voice spills out between her delicately lined lips. Her name has been on the steady rise over the years, headlining Boiler Room’s first festival, selling out shows in the U.K., and amassing several million streams across all services.

I hear her jewelry through the phone, tinkles turning into clangs as she gets excited about our conversation. It has only been about three years since the London-born Peng chose to completely invest in her musical career. “For a few years, I was very insular. Singing was not a part of the identity I had created for myself. I fell out of love with singing,” Peng explains. “But I fell back into music while living on the beach in Mexico and I was mad, because why did I stop doing this? It’s the only thing I enjoy properly.”

The result is an amalgamation of influences that swish together to create something so relevant, yet nostalgic. Peng reflects on the lineage of her forthcoming debut album Man Made, out June 4 via AMF Records, telling me, “If I thought of making an album, I’m thinking about The Fugees’ The Score or The Miseducation of Lauryn Hill. I never wanted to put out half-hearted projects with an accumulation of random songs.”

In many ways, the seed was planted with “Kali V1,” uploaded on Peng’s YouTube channel three years ago. Throughout most of her songs is a common thread of reflection on the cracks in the outside world that slowly reveal themselves. “Kali V2” takes many cues from its predecessor, and she sinks her claws deep into the 2020 protests following the murder of George Floyd, rumblings that she felt in her London home. “I contribute to the lies in this fickle paradise,” Peng croons over a minimalist drum beat and atmospheric guitars, speaking to the themes of self-discovery and humility that are present throughout her new body of work.

Peng is part of a larger scope of musicians utilizing the malleability of R&B to create their own distinct style. Her psychedelic-tinged soul echoes back to the neo-soul movement spearheaded by the likes of Erykah Badu and D’Angelo, but with a modern cool-girl vibe that puts her within the reach of fellow innovators Abra and Ravyn Lenae. Badu and Lauryn Hill are the most prominent influences that shine through her music as the lines are blurred between metaphors and truths, political observations and stream-of-consciousness ramblings.

However, Peng hesitates to call herself a political musician, and even corrects herself abruptly when she refers to listeners as “fans.” With the intense vulnerability of her work comes an awareness of the space she wishes to enforce between her and her listeners. “This is my healing journey,” she asserts. “I have no option but to be vulnerable throughout the whole process because that is naturally what it is to me. It comes hand in hand. I’m lucky that the people who listen to my music are connecting with the music and the honesty rather than me sending out a facade of myself. I can disappear and tell people I’m fucking depressed and they know that’s me.“

She is also quick to point out that 2020 was far from the turning point for herself, along with many other artists of color. “I’ve been this way my whole life. I was taught to question everything, and 2020 accelerated and reified all the thoughts and opinions and worries I have,” Peng says in one long breath.

Aside from the culmination of years of distress coming to a head in 2020, Peng also dealt with trauma and other unpredicted setbacks. Her stepfather, whom she referred to as her biggest influence, passed. The loss was still fresh during the recording sessions of Man Made. The pandemic also forced musicians such as herself to cancel their upcoming shows, most notably her first Glastonbury performance. “I had just released my song ‘Ghost Town’ about my city being stolen from me and within two weeks, the whole of London was shut down!” Peng says with a giggle.

But with the pandemic came a lot of free time to explore oneself, of which Peng took full advantage. In the case of Man Made, it was a way to finally tap into the long-lost art form of an album. “Back in the day, you get a song that’s seven minutes long and the album is over an hour. It’s a proper journey.” Peng explains. “I thought it was a good time for that kind of feeling … We’re just trying to make songs that don’t fit in pigeon holes for the radio.”

The line between Greentea Peng and who she is in her daily life is nearly nonexistent, and she wears her creativity and vulnerability with pride in a time where social media has created a fake authenticity. She beckons in a new era of old-school comfort along with her peers, bringing a smooth soundtrack to a revolution that is a long time coming. Peng herself said it best in the parting words of our conversation: “Fact check the fact-checkers.”

You can stream “Kali V2” below and pre-order Man Made before its June 4 release here. Tracklisting and artwork can be found further down below.