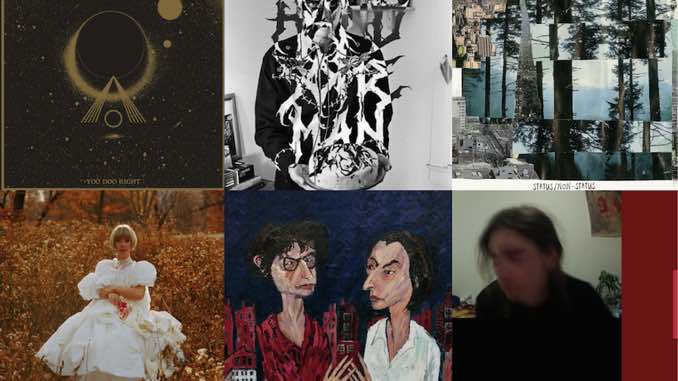 Great Records You May Have Missed is a monthly music column highlighting a handful of new releases we really enjoy that you might not have heard about elsewhere. It’s curated and written by former Paste music editor Lizzie Manno, so please tell her if you found something in here that you love. Explore all editions of the column here.

In the time that I spent putting together the first edition of this column, an untold number of musicians have released new music, formed their own record label and tried to decide whether the track they’ve been working on is too much of a Pavement ripoff.

So much new music comes out every month that no single person could listen to all of it. Think of all the tabs you’d need to have open on your computer, or the amount of music that’s only available via physical format or in certain countries. While that can be overwhelming, it’s also exciting to know that no matter how much music you listen to, your next favorite band is always out there. Sadly, not every one of those bands will just pinball their way towards you, but when they do, it’s an incredible feeling. I try to stay in the loop with new releases as best I can, partially because the possibility that there’s a band out there that will change my life but I’ll never stumble upon them is super daunting to me, and because music is so stupidly good that sometimes I cry about it when I’ve had way too much to drink.

Anyway, each month in this column you can expect to read about several interesting releases that haven’t received a ton of attention. In effect, I’ll try to remove the stressful pinball situation and direct cool new stuff straight to you. Hopefully, you’ll find something that you really like, or something you hate so much that you come full circle and start to enjoy it. Okay, I’ll shut up now and leave you to it, but if you do find a release you like here, consider buying it on Bandcamp because currently, you would need to stream a song 786 times on Spotify just to buy a cup of coffee for a band, which is insane.

Carolyn Flaherty, who makes music as Carol, has a voice so elegant and towering that you may need a moment to sit with the reality that some people can, in fact, sing like this with ease. Equal parts saintly and nymph-like, her voice is a plentiful world unto itself, reaching out to comfort from the moment her rousing lilt unfurls. Her recent EP Soiled contains hallmarks of folk, psych and art-pop, but none of these signifiers adequately capture the majesty of her songs, which flicker between the grandeur of a tense, gorgeous sequence from a fantasy film (“Spill”) and the dainty intimacy of the first flower you spot blooming in the springtime (“Changed to Survive”). Her striking vocals are accompanied by finger-picked guitar, harp, piano and a string quartet, adding to the celestial glow of the songs, which explore the light and darkness inside each of us, and suggest a close relationship between hurting and healing.

Asheville five-piece Wednesday are prepping the release of their second album Twin Plagues, out on Aug. 13 via Orindal Records, and its lead single “Handsome Man” is one of my favorite songs of the year so far. With a steady stream of cheerful, blowtorched guitars and vocals so sweet you can practically hear the smiles on their faces, this song is a certified mood-boosting joyride. While the lyrics are tinged with lonesome woes (“I’m all alone in a snow globe / Where do we go when the glow goes home?”) and amusing fragments of memories (“Holding a crossbow in a family photo”), the song exudes an impenetrable state of loose, giggly ease—it acknowledges this deeply fucked-up world, and then takes a deep breath and wears a good-faith grin, which is honestly the most you can expect anyone to do these days. As they describe, in a time marred by peeling wallpaper, car crashes and ugly overpasses, we can at least laugh through the pain, or in their case, make a rock song so damn good that literally nothing can faze anyone who’s listening to it. And its expectedly smiley music video swaps those aforementioned bummers for simple pleasures, namely sunshine, parking lot adventures and Ring Pops.

Francesca Brierley’s new EP as heka, the plainly titled (a), may be unassuming, but it snakes its way inside your psyche pretty quickly. These four lo-fi tracks contain a mesmerizing calm and an emotional frankness that stares you in the face and wrestles with the aftermath of pain. Though the EP’s ambient textures delight and heal, the central frameworks of heka’s songs are always constructed to thrive on their own. The opening track “(a) mask” rests on somber, folky melodies that would be just as arresting via soft, a cappella hum, even when her voice swerves towards misty auto-tune intonations.Through light hisses, pronounced echos, what sound like castanets and other instrumental flutters, her compassionate vocal performance absolutely steals the show on “(a) dab,” a grisly tale about an unhealthy romance spiraling out of control. Though not without unexpected sonic treasures, the magic of (a) rests on Brierley’s full-hearted belief in the powerful simplicity of her songs.

It’s hard to put my finger on a band quite like Sons of Raphael. In interviews, West London-based brothers Ronnel and Loral Raphael speak about religion, rock ‘n’ roll and politics in such grandiose terms that you’d think you were reading a Rolling Stone cover story from 1970. They’re either so eccentric that the intended irony of their provocative statements doesn’t immediately register, or they’ve spent far too much time in their own heads to realize that likening their band’s trajectory to Jesus’ “marginal movement [that] transcended cultural boundaries” sounds absolutely insane. For now, I’m going to hope it’s the former, and just enjoy their delightfully weird songs. Their debut album Full-Throated Messianic Homage brims with elaborate, oddball psych-pop, cryptic theological references and intensely satisfying pop hooks. Much like their interviews, it’s best consumed with a playful desire to be dazzled and without literal interpretation, but that takes nothing away from their lush, ambitious songs—which were mixed by the late Philippe Zdar, no less.

As of this year, the band formerly known as WHOOP-Szo are releasing music as Status/Non-Status, a reference to bandleader Adam Sturgeon’s identity as a non-status Indigenous person. Their 2019 album Warrior Down was a gnarled, melodic affair that grappled with the modern realities of colonialism, and it was long-listed for the Polaris Prize the following year. Now with a new EP 1, 2, 3, 4, 500 Years, their first project as Status/Non-Status, they sound just as mercurial as before. One minute they’re playing a gentle acoustic song with pretty, multi-tracked vocals (“Find a Home”) and the next, they’re breaking into a frightful, heady jam that bares its sharp teeth (“Genocidio”). With illuminating, passionate storytelling and a sonic curiosity that blurs the line between grunge, psych, folk and noise, Sturgeon impresses yet again.

Yoo Doo Right: Don’t Think You Can Escape Your Purpose

Named after a song from Can’s 1969 debut Monster Movie, Montreal band Yoo Doo Right are truly something special. Their debut album Don’t Think You Can Escape Your Purpose melds post-rock’s twisty mystique with krautrock’s contagious pummeling and space rock’s hypnotic drone. Sometimes vigorous and verging on total collapse and sometimes delicate and measured, it’s a gift that never stops giving. They really nail this push and pull on the seven-minute scorcher “1N914,” a brawny yet intricate track that folds in shoegaze and psych. “Join, Be Curst” even taps into dusty death rock, while mighty closer “Black Moth” adopts doom metal throbs. While many post-rock or psych artists are content with merely trotting out these genres’ respective tropes, Yoo Doo Right are hellbent on breaking new ground. With their ever-evolving, smoldering guitars and synth tidal waves, you never know what’s coming down the pike with this album—apart from impressive musicianship and dynamic songwriting—but rarely does a note or mood feel out of place.