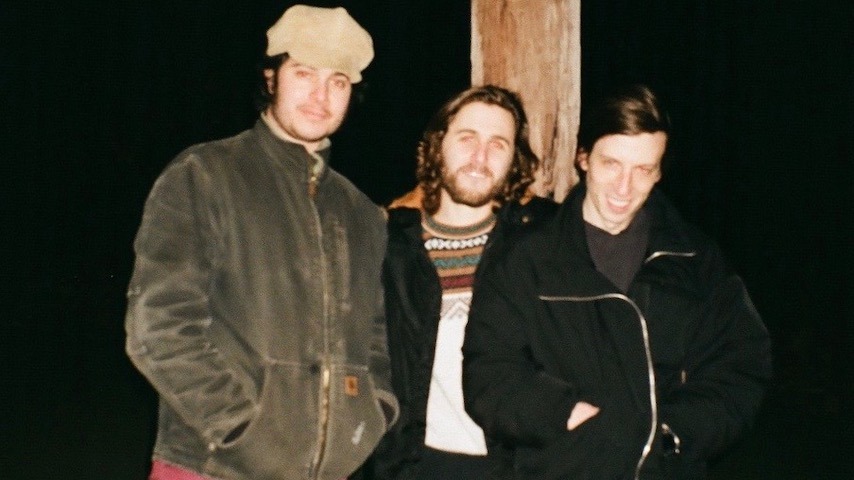 Pay For Pain—the new project from the three ex-Tigers Jaw members—have released their new Pain EP today (June 12), and we’re premiering the new video for their infectious track “You Take Command of My Heart,” alongside an interview with the band.

Watch the video for “You Take Command of My Heart” below, and purchase the EP here. Scroll down to read our exclusive Q&A with the band.


Paste: What’s the story behind the three of you meeting up to make music? Who hit up who?

Adam McIlwee: I think it was Dennis’ idea.

Dennis Mishko: I’ll take credit, but I honestly don’t remember. We were never not in touch with each other. It was, and still is, simply a matter of finding time to get together.

There’s a lot of dark imagery on this EP—about the devil, masochism, death. Is there a storyline running through it that ties these songs and images together?

McIlwee: Not intentionally. I think my songs are an extension of what I was writing about for Wicca Phase projects, so some of the thematic elements stayed the same. I did want to try using that imagery within the context of a band (and this band particularly), so that part was intentional.

Mishko: My songs generally mix personal impressions and sinking into one medium of communication or art for a long time. Generally, that medium has something bizarre about it or grows grotesque as my mind turns it over.

What are some inspirations?

McIlwee: Lyrically, it’s what I feel like I’ve been drawing inspiration from for years—Mount Eerie, Chris Knowles, Peter Levenda. I only say that because it wasn’t like we were trying to start a specific type of band, but rather do what came naturally to us, and those are the influences I’ve been relying on for a while. For the instrumentation, I think ’60s and ’70s folk rock, like The Band, The Byrds, Neil Young, but punk music has always been a major part of our friendships and I think that influence is unavoidable. Not that I want to avoid it.

How did the cowboy feel of these songs emerge? Was it a conscious decision or did it reveal itself?

McIlwee: I think it just revealed itself, but there’s also that folk rock influence of The Byrds’ Sweetheart of the Rodeo or western-sounding Beatles songs present as well. But no, I don’t think it was intentional at all.

Mishko: That all sounds right. Tiger Army is almost always in my head on a daily basis.

How does the collaborative effort work for the three of you?

McIlwee: It’s usually just one of the three of us presenting a song at a practice, and then playing the song and doing some rewrites during the practice so that we can play it naturally. When we were recording the EP, everyone (including Matt Schimelfenig, who recorded us) would make suggestions regarding overdubs or harmonies once the main live track was recorded.

Where do you recommend listening to this EP (on a drive, at night, etc.)?

McIlwee: At night works. I would suggest getting an Airbnb somewhere remote with a fire pit. A campfire would probably work, but I’ve never been camping, so I can’t speak to what that experience would be like.

Pat Brier: In a good sitting place. If you enjoy wine, or a skunky alcoholic drink, and are sitting, I think it’d go well with that, at night. Or with pot on a porch. Those are the two pairings I’d recommend to help open your ears and hear the things going on. I’ve listened a few times while driving, and it goes well with that, too.

How has being in other bands and working on other projects shaped Pay For Pain?

McIlwee: I think having played together for so many years helped us skip the awkward period of starting a band where you’re trying to figure out everyone’s strengths and weaknesses.

Pat Brier: It’s made it easier to appreciate the simplicity of playing music in a room together, and recording it, quickly. We did those Tigers Jaw records over weekends, really quickly. I missed doing that.