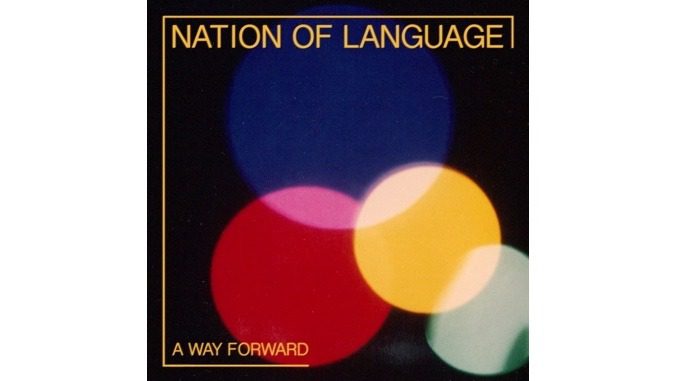 We almost didn’t get to hear Brooklyn band Nation of Language’s stunning 2020 debut Introduction, Presence. Like many bands, Ian Devaney, Aidan Noel and Michael Sue-Poi struggled financially, until Noel and Devaney got married and asked their loved ones to fund their album as a wedding present. And now, thanks to the unexpected (but totally deserved) success of their first album, we’re being graced with A Way Forward, a carefully constructed and emotionally resonant sophomore effort.

Nation of Language excel in their use of juxtaposition throughout the album. “In Manhattan” sounds starry-eyed thanks to Devaney’s soaring vocals and ultra-neon synth; you can imagine upturned faces admiring the rising skyscrapers of the titular borough. The lyrics tell a different story, though: “Strung along by a fiction / From a movie screen / In Manhattan / You cannot have it all.” The contrast between the disillusioned words and hopeful melody magnifies the song’s bittersweetness.

Likewise, “The Grey Commute” focuses on less-than-sunny subject matter: rampant capitalism and all of its dire consequences. Devaney captures the struggle of the everyday worker heartachingly well as he sings, “Broken hands, begging at the altar of the grey commute / Some of the weight / We can’t carry it.” The song itself is a verifiable bop, though, with pitter-pattering drum machine and synth urging along the bassline. The bridge climbs into the stratosphere, expansive in a way that is slightly reminiscent of The War On Drugs. The upbeat elements of “The Grey Commute” make it something of a “Trojan horse,” as Devaney put it in a press release. Well, consider the city sieged.

The songs that are more straightforward in tone hit the mark, as well, namely “Former Self.” The track is by far their darkest to date, with every added element creating an even murkier sense of doom and sadness. At one point Spanish guitar kicks in, trading the limelight with little synth ditties in an ongoing instrumental conversation. “Away from you, I cover it well, but I may crumble, I can’t stop myself,” Devaney laments. His former self keeps telling him he deserves better, but entropy feels inevitable. At the same time, the song is so mesmerizing that you’re tempted to lose yourself, as well.

Part of what makes A Way Forward work so well is the trio’s deft use of momentum. “In Manhattan” is all build—appropriate for an opener, but also even more effective when you imagine the New York skyline ascending around you. On “Across That Fine Line,” which has one of the album’s most singalongable lines with “I died a hundred times,” the band keep careful control over the song’s potential energy before letting it burst forth on the chorus. The record’s highlights prove more impactful thanks to Nation of Language’s thoughtful pacing.

A Way Forward also hits its stride thanks to producers Nick Milhiser and Abe Seiferth, who worked on five tracks each. Their skills deftly enhance the talent that’s already there. Devaney’s voice, melodic and enrapturing, becomes an ethereal chorus in almost every song in a way that elevates the music, rather than becoming a cheesy gimmick. The layers of synths that define most every Nation of Language track move from ear to ear and create a staggering sense of space. Whether they’re breathy and washed out or zinging aural comets, the synths twist around like those old-school screensavers of pipes, carving out a singular place in your imagination.

“They’re Beckoning” closes out the album with elements of foreboding and sonic euphoria that neatly wrap up the journey of the previous nine songs. Devaney’s words conjure the traditional image of death: “And they’re beckoning / Everything is calm / The wilting, aching palm / Extended forward.” That, combined with the staccato sound of a ticking clock at the song’s beginning and end, brings our mortality to the fore. At the same time, ebullient synths carry us throughout, bringing back the wide-eyed romance of “In Manhattan.”

Nation of Language don’t just keep doing more of the same on A Way Forward, though they totally could have gotten away with that. They extend themselves, influenced partly by krautrock, rather than sticking entirely with the new wave sound of their debut, but also remain impressively sonically consistent. With their sophomore album, Nation of Language solidify themselves as mainstays of ’20s synth-pop music.