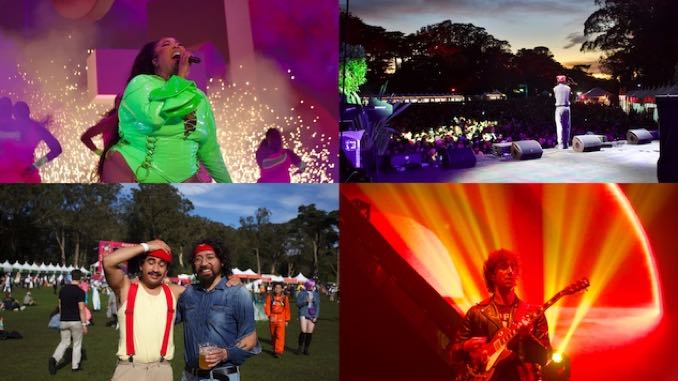 Outside Lands Festival has come a long way in its 12 years of life. And look, it’s been one of the biggest and most significant festivals on the West Coast for quite some time. But there were definitely some kinks to iron out, some soul-searching to do and a lot of conscious decisions required to turn it into the all-encompassing, inclusive and positive experience that the 2021 edition was this past Halloween weekend.

I wrote a review of the 2016 festival that, while noting an enjoyable experience for the most part, focused on a missing link: a sense of community and harmony among festival-goers. I argue that this is the mark of a truly great festival. And it takes time to build. By all accounts, Outside Lands 2021 exuded this environment, and it was evident in a glowing sense of gratitude from everybody there: Artists, fans, vendors, staff, everybody.

Golden Gate Park is a glorious venue, and among the very best—if not the absolute best—music festival venues in the country. It’s meadows and groves flow like a thoroughfare of interconnected finger lakes, and you’re free to float around and discover its many Lands while building your own experience. Organizers have also clearly put more thought into the scheduling of acts to where, throughout the day, it often feels like there are two distinct heartbeats to the festival. One emanates from the Land’s End Stage at the Polo Field on one end, and the other from Twin Peaks Stage at the end of Hellman Hollow on the other. These pulsing crowds take turns moving from one end of the festival to the other, and it’s during this dance that we learn the most about each other and the weekend’s ephemeral community as a whole.

This year, the crowd just felt so alive, joyous and genuinely grateful to be at a festival for the weekend with friends and strangers alike—almost as if we’d all been through a global pandemic together and this was our big coming-out party.

“Gathering with people is very important to being a human being,” Albert Hammond Jr. of The Strokes told me, a day ahead of their headlining set. It’s simply stated, but it resonates at a music festival on a gigantic scale.

The fact that it was Halloween weekend sure helped add to this overarching sentiment, as well. People expressed themselves and complimented each other’s costumes at every turn, often making new friends in the process. I was dressed as a humble ’80s astronaut, but there was amazing creativity; after all, it is San Francisco. There were Cheech & Chong (who could barely keep their eyes open, natch), Carl Fredericksen (the old man from Up voiced by the recently departed Ed Asner), Caroline Polachek dressed as Marie Antoinette (with a guillotine gash across her neck to boot!) and my personal favorite, Nap Eyes guitarist Brad Loughead dressed as Buckethead.

But credit to Outside Lands for developing the self-awareness over time to make sure that costumes fed into an inclusive experience. “Get spooky, but please respect the cultures of others when donning your costume (ie—no headdresses permitted),” it said on the festival’s website Info section, addressing an issue that plagued numerous festivals in the past. There was a very clear effort put forth by the festival brain trust to ensure that this weekend felt like something to be thankful for and was treated as such.

I talked with a staffer for Clean Vibes who was in town from Florida to work and relished sharing their favorite sets of the weekend with me while they emptied bins at the end of the night. As a company, Clean Vibes’s on-site waste management and education around composting, recycling and proper waste disposal has led to an over 90% trash diversion rate at Outside Lands. Their presence needs to be lauded every year.

Even at Beer Lands, the festival’s impressive and largely Bay Area-wide operation, inclusion was evident. Teo Hunter, COO and Head Brewer of Inglewood’s Black-owned Crowns & Hops, was represented in the mix of breweries. Crowns & Hops is a loud response to the lack of Black and Brown people in craft beer, making great beer and becoming a subversive force in their industry. “We come up often and do events in Oakland and in the Bay in general,” Hunter said. “The Bay Area is love.”

Music-wise, this was easily the most diversely minded slate of performers I’ve ever seen at Outside Lands. An absence of a legacy headliner who didn’t start putting out albums until after the turn of the millennium made this the youngest crowd I’d ever seen, too, which really tightened the age gap between the bulk of attendees. Lizzo and Tame Impala were nothing short of the highlights of the whole weekend, both proving that they positively belong at the top of any bill, wherever they go next.

If Tame Impala wasn’t your bag on Sunday night, J Balvin and Kehlani (a Bay Area native) were on opposite stages, waiting to put it down for you. If you wanted to dance, the brand new SOMA Tent was one of the busiest places in the park. There was also a small stage at the legal cannabis-palooza that is Grass Lands. The Heineken House had eclectic electronic acts like Egyptian Lover and Sango, while artists like Moses Sumney, Angel Olsen, Buscabulla, Burna Boy, Dijon, Bartees Strange, Evann McIntosh, Rexx Life Raj and Bakar marked the weekend and showed how beautifully diverse the programming was. The acts on the stages finally represented what the real world looks like, and that was much appreciated by long-time attendees.

But it was the continuity of acts at Outside Lands that further showed the long-standing community being built here. Khruangbin and Rüfüs Du Sol had both played at the festival’s smallest primary stage in year’s past, the intimate Panhandle Stage. This year, they were playing prime slots on the Land’s End Main Stage. Lizzo, who had played an early set in the past, was closing out Friday night’s festivities on the Main Stage. And as she coursed through a flat-out awesome set, the gratitude and the inspiration being beamed to and from the 70,000 people there per day was palpable.

Adrian Spinelli is a Brazilian-born, San Francisco-based arts & culture journalist, who has frequently covered festivals for Paste over the years. He BBQs like his life depends on it, eats more sandwiches than you do and loves discovering new artists. Catch him on Twitter @AGSpinelli. Fueled by espresso.