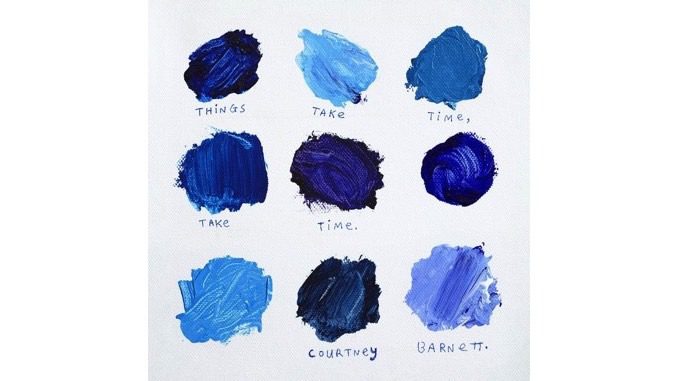 “Pissed off” and “low key” are two phrases that don’t easily go together, like “nuclear” and “medicine.” But Courtney Barnett’s dynamite 2018 album Tell Me How You Really Feel was a low-key pissed-off piece of work, easygoing to the ear but embedded in its author’s meandering rancor. Tell Me How You Really Feel had chips on its shoulder. They were simply sketched in broad terms, only rarely taking tangible shape on a few key songs. By contrast, Things Take Time, Take Time is laid-back verging on cheerful, a product of time’s passage; it’s amazing how a few years going by can cool the temper and soothe the spirit.

Things Take Time, Take Time is a record of contemplation, that damnable, lazy buzzword folks use when art denies them obvious adjectives for describing a deliberately relaxed piece. In Barnett’s case, contemplation is her immediate aim, though this can be broadened into a larger story about slogging through negativity to find a bit of sunshine. Reading over the tracklist, you may wonder if she consulted with Laura Vanderkam and Gretchen Rubin, writers specializing in such subjects as time management, productivity and the pursuit of happiness: “Write A List Of Things To Look Forward To” and “Take It Day By Day” both read like episodes of Vanderkam’s podcast, Before Breakfast. This is a good thing. We’re all in need of advice on how to slow down our lives and seek out meaningful joy.

Barnett, last heard from singing about such subjects as men’s fears (being laughed at by women) versus women’s fears (being killed by men), isn’t a source you’d expect to offer self-help advice, but Things Take Time, Take Time provides anyhow. That’s the vibe Barnett’s on here, but filtered through her songwriting particulars: her dryness, her mussy, laidback worldview, her multi-genre style. Barnett’s sound travels from punk to folk to grunge to blues. This makes sense. Each relates to one of the others, at least, and it’s nothing short of a joy to hear them pal around together on songs like album opener “Rae Street,” melancholic through and through, and “Turning Green,” bass-forward and chipper as the buzz of Barnett’s guitar echoes in complement to the low end.

For a record born of introspection, Things Take Time, Take Time is surprisingly fun. Barnett flirts with lugubriousness, but doesn’t actually commit, because committing to moping isn’t the point. Looking inward and working through depression, exhaustion and other stresses naturally means facing up to a degree of sadness, but Barnett reaches the other side of her emotional processing with newfound optimism. Tell Me How You Really Feel didn’t pull punches; that record cut and stung as Barnett meant it to. She kept the music honest. Things Take Time, Take Time is vulnerable music, which represents an honesty Barnett tends to stray from in her superb discography.

Listen to “Take It Day By Day.” On the first play, you’ll get the impression that Barnett’s singing just for you, nonchalantly encouraging your self-improvement for just under two minutes. Another play changes the meaning. She’s either singing to herself or recalling rallying words spoken to her by a friend or loved one. “Tuesday night I’m checking in / Just to see how you’re going,” she hums just before snapping off the track and moving on to the next. “Are you good? Are you eating? / I’ll call you back next week.” Barnett is blunt and no-nonsense in keeping with her personality, but this is her giving a shit about the person wearing the headphones (or someone giving a shit about her). It’s a touch offhand, but totally earnest.

That’s Things Take Time, Take Time’s sum total. For anyone, not just Barnett, this is a remarkably sweet album, communicated in the language Barnett is accustomed to speaking. She cares. She’s frank about her caring, too. If there’s one immediate “oops” here, it’s the conflict between the fourth track, “Before You Gotta Go,” and the last, “Oh The Night,” which both function as perfect closers. “Before you gotta go, go, go, go / I wanted you to know, know, know, know / You’re always on my mind,” she sings on the former; “Sorry that I’ve been slow / You know it takes a little / Time for me to show how I really feel / Won’t you meet me somewhere in the middle,” she croons on the latter. In the end, of course, where these tracks fit matters less than the sentiments they express.

Bostonian culture journalist Andy Crump covers the movies, beer, music, and being a dad for way too many outlets, perhaps even yours. He has contributed to Paste since 2013. You can follow him on Twitter and find his collected work at his personal blog. He’s composed of roughly 65% craft beer.