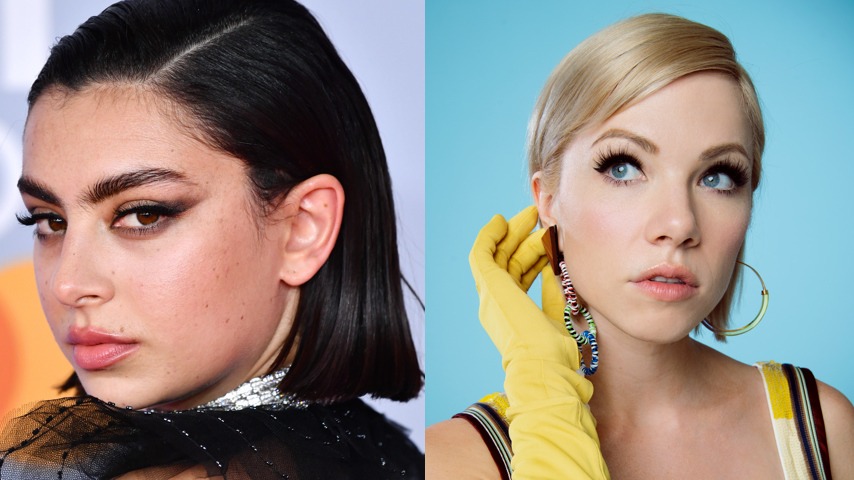 The recently released albums from beloved cult pop icons Carly Rae Jepsen and Charli XCX feel tailor-made for playlists dedicated to favorite fictional couples. Under the guise of effervescent pop and the kind of platonic ideal influenced by the ’70s and ’80s, Carly Rae Jepsen’s songs yearn without end. And despite her knack for crafting instant hits, Charli XCX’s personal discography tends towards deconstructed cyborgian pop about partying and emotional self-sabotage. When you put their two new albums side by side, Dedicated B-Sides and How I’m Feeling Now portray two distinct characters and fulfill different emotional responsibilities. Listening to their songs becomes more fun when you imagine that their lyrics represent the two sides of “The Dynamic,” a fandom shipping archetype popularized by Tumblr.

The Dynamic is always comprised of a “sweaterboy” and an “absolute nightmare.” The sweaterboy character fears ostracism and at the expense of their own self expression or freedom, tries to live by convention to a crushing extent. The absolute nightmare character, understanding that they are in some way different, leans completely into their “abnormalities,” rejecting society before society can reject them. In various iterations, they have been Watson and Sherlock, Harry and Sally, unstoppable force and immovable object.

Many well-written fictional couples share this dynamic and follow a trajectory rooted in the two halves moving away from isolation by liberating and seeing each other. They are companions who would seem to be at odds with each other, but are otherwise more alike than they seem.

If the concept seems unfamiliar, consider the very existence of “Backseat,” the 2017 collaboration between Charli XCX and Carly Rae Jepsen. Instead of staying in an unfulfilling relationship, Charli’s narrator chooses self-isolation, while Carly Rae Jepsen’s narrator reluctantly remains in a form of domesticity. The refrain “all alone” reflects the end result for them both.

Carly Rae Jepsen depicts a sweaterboy’s struggle to pretend that everything is fine. Trapped in the role of a caretaker, they deny themselves the pleasure of reciprocity and constantly self-sacrifice, fearing they may be a burden otherwise. However, Carly Rae Jepsen’s sweaterboys are less emotionally repressed than most, able to honestly express their desire for freedom and satisfaction through song, even if they aren’t always able to with their partners.

The absolute nightmare, as written by Charli XCX, is often mistaken for emotionally unavailable as they try to protect themselves and their over-the-top feelings. Their rule of thumb is to ask for forgiveness rather than permission, to live by their cravings and act out rather than pursue what is healthy for them. The truth is that these characters are deeply needy and want nothing more than to drop their sparkly veneer and be vulnerable with someone.

Inspiration for a jukebox musical about The Dynamic could come from anywhere (even the “How to Write an Alt-J Song” guys), but the discographies of Carly Rae Jepsen and Charli XCX provides a particularly apt soundtrack. For argument’s sake, let’s walk through CRJ’s and Charli’s discographies to see how a couple like this might interact, come apart, and eventually accept their love for each other.

On “Backseat,” these characters find each other in a similar state and are immediately obsessed. While they don’t get together romantically at first, they experience some friction because the sweaterboy tries and fails to get closer to the absolute nightmare, who reveals their thoughts to the audience by singing“White Mercedes” from Charli. Frustrated by the absolute nightmare not admitting their feelings and not knowing that the nightmare’s actions are fear-motivated, the sweaterboy transitions into “Cry” from Emotion B-Sides.

Charli’s “Silver Cross” and Dedicated’s “Too Much” demonstrate the inversion of The Dynamic taking place. While apart, the absolute nightmare takes care of people and the sweaterboy freely acts a fool (though they are still self-conscious about it).

After some soul-searching, both sides transition into the How I’m Feeling Now and Dedicated B-Sides realm. The absolute nightmare admits their weakness with “Detonate” and confesses their endless love for the sweaterboy in “Forever”. Ever-practical, the sweaterboy suggests verbatim, “Let’s Sort the Whole Thing Out.”

For the sweaterboy and the absolute nightmare both, being completely loved feels unachievable at first. But the transformative power of The Dynamic relationship lies in the acceptance and recognition of the self in another and feeling safe enough to eventually reverse roles. Beyond their sonic differences, the shared tender streak of Charli XCX’s and Carly Rae Jepsen’s lyrics provides a rich emotional landscape for fictional or even real pairs.

Jane Song was an intern at Paste and is very qualified to talk about culture. You can find her at janesong.net or more frequently on Twitter at @janesingasong .