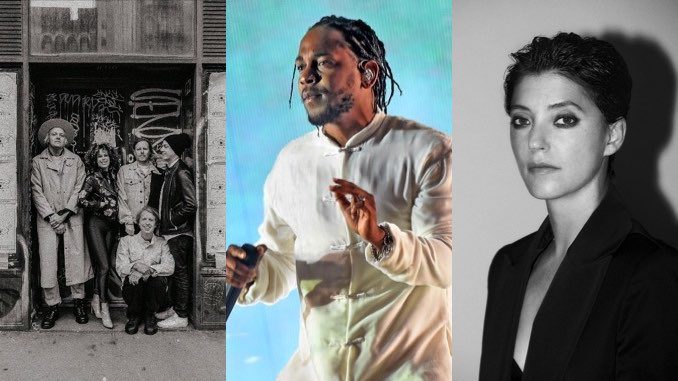 If April showers bring May flowers, then April albums must bring even more May albums to enjoy. With mid-year lists fast approaching, it’s only fair that May is jam-packed with highly anticipated releases from both old and new faces. Whether it’s Kendrick Lamar’s final Top Dawg Entertainment album, Arcade Fire’s first album in half a decade or Mallrat’s sparkly debut studio album, May arrives with just some of many albums that Paste has kept you updated on through singles, videos and more. Let us plant the seeds for some beautiful blossoms in your playlists this month: Check out our most-anticipated albums of May below.

An entire generation of indie-rock listeners has come of age with Canadian collective Arcade Fire, from their modern classic 2004 debut Funeral to 2017’s polarizing Everything Now. The latter album was the closest the band have come to stumbling, trading in their soaring emotional anthems for cynical dance jams too clever by half, and getting lost in the wash of “Infinite Content” they sought to comment on. That’s all the more reason to get excited about WE, Arcade Fire’s sixth studio album, their first in five years, and—depending on who you ask—perhaps their best in over a decade. Split into an “I” side evoking the “fear and loneliness of isolation” and a “WE” side celebrating the “joy and power of reconnection,” WE is not only an album uniquely of this era, but also a galvanizing comeback journey from one of the most enduring rock bands of the 2000s. —Scott Russell

There are few more gratifying feelings than hearing a new song, only to realize you were waiting for something just like it to come along. It’s like scratching an itch you didn’t know you had, or pushing a lost puzzle piece into place inside your brain. That was exactly the case when Philadelphia four-piece Sadurn announced their signing to Run for Cover in February and shared the lead track from their forthcoming debut album, “snake.” Led by vocalist-guitarist and songwriter Genevieve DeGroot, Sadurn are a band who move as one in service of each song, disappearing selflessly into their intimate, gentle folk-rock and -pop compositions. DeGroot’s songwriting is defined by its stark vulnerability, their vocals alternately soaring and softening in time with each heart-baring observation on strained relationships and the often unbridgeable gaps between people. Radiator is just what its title suggests, emanating emotional catharsis even as it handles those feelings with the utmost care. —Scott Russell

Sharon Van Etten: We’ve Been Going About This All Wrong

Though Sharon Van Etten has proven time and time again that her new projects are always worth getting excited about, there’s an extra air of anticipation surrounding We’ve Been Going About This All Wrong, seeing as Van Etten has chosen not to release any singles. Sharing that recent singles “Porta” and “Used to It” would not be featured on the record, Van Etten explained in a statement that she “wanted to approach this release differently, to engage my fans in an intentional way, in an effort to present the album as a whole body of work.” Regardless, she promises that the 10 tracks (“designed to be listened to in order, at once”) will tackle her meditations on life and the choice to desperately cling to any shred of hope when it appears that the world is falling apart. According to Van Etten, the cover says all we need to know going in blind: “I wanted to convey that in an image with me walking away from it all…not necessarily brave, not necessarily sad, not necessarily happy.” —Elise Soutar

It’s been a given for the past few years that Kendrick Lamar’s eventual follow-up to DAMN. would sit near the top of any list having to do with anticipated albums. However, as opposed to prior hopeful shots in the dark, now the 14-time Grammy-winner has actually given us the gift of a title, Mr. Morale & The Big Steppers, and a release date of May 13. He’s also hinted that the highly anticipated record will be a double album (and based on that picture, possibly a book? Maybe to prove critics of his Pulitzer Prize win wrong?), meaning there’ll be double the new material for fans to pore over. The release will reportedly be his last with longtime label Top Dawg Entertainment, as he noted in a message on his website back in August: “I feel joy to have been a part of such a cultural imprint after 17 years. The Struggles. The Success. And most importantly, the Brotherhood. May the Most High continue to use Top Dawg as a vessel for candid creators. As I continue to pursue my life’s calling.” As we witness that pursuit later this month and continue to agonize over the cryptic teasers we get in the meantime, there’s little doubt that Lamar’s latest offering will be one of the most exciting releases of the year. —Elise Soutar

Brooklyn rapper Leikeli47 is a shapeshifter. Her attitude-laden raps hold endless amounts of confidence and wit. Her forthcoming album Shape Up, her first full-length project since 2018’s Acrylic, is bursting at the seams with charm. Chopped-up vocals become second instruments, and Leikeli’s expressive delivery props her up as a beacon of resilience. Whether over bubblegum-bright dance beats or bass-heavy grime, Leikeli continues to build her artistry on her own terms under the veil of anonymity, with a fierce love for Black womanhood and the power of dance. —Jade Gomez

Mallrat, also known as Grace Shaw, has been releasing music since she was a teenager. As the Australian singer/songwriter enters adulthood, her music reaches new heights. It was smart to wait to release her debut studio album Butterfly Blue now, as the album widens her scope and brings a new, refreshing focus to her music. Its glossy pop textures have a rough, lo-fi edge. Shaw’s omnivorous musical appetite takes a front seat on Butterfly Blue, whether it be in the form of a coveted Azealia Banks feature or Memphis rap references. Throughout the project, Shaw embraces a confidence that is fitting for such a debut, proudly presenting a collection of stunning pop cuts with boundless inspiration. —Jade Gomez

Quelle Chris is not interested in fitting into any conventions, and DEATHFAME might be his most innovative album yet. The gentle, preacher-like cadence of “Alive Ain’t Always Living” and the soul of “The Sky Is Blue Because The Sunset Is Red” only represent a fraction of the sounds Quelle explores. Pitched-down vocals and mysterious clangs seep into ominous samples, evoking the urban legends of Memphis rap sigils and the murkiness of nihilism. Quelle swan-dives into a beautiful death, taking listeners along for the ride in the twisted, Willy Wonka-like abyss he finds on the way down. —Jade Gomez

The Smile: A Light for Attracting Attention

It didn’t take long for “the first true supergroup of 2022” to make their presence known. On Jan. 5, Radiohead’s Thom Yorke and Jonny Greenwood, and Sons of Kemet’s Tom Skinner released their first single as The Smile, starting the ball rolling towards this month’s release of their debut album, A Light for Attracting Attention. There is, naturally, more than a little Radiohead DNA at work here, namely via Yorke’s inimitable vocals, Greenwood’s atmospheric keys and string arrangements, and even production and mastering from the band’s longtime collaborators Nigel Godrich and Bob Ludwig, respectively. But Skinner and a host of U.K. jazz players—including a full brass section featuring Theon and Nathaniel Cross, Byron Wallen, Chelsea Carmichael and others—introduce new and exciting variables into that formula, giving songs like “Free in the Knowledge,” “Pana-vision” and “Skrting on the Surface” the weightlessly ethereal quality of a waking dream. Between that, dubby jam “The Smoke” and Pablo Honey-esque rocker “You Will Never Work in Television Again,” The Smile’s singles thus far indicate a release that runs much deeper than simply a side project. —Scott Russell

New Jagjaguwar signees They Hate Change are all over the place, and that is far from a bad thing in this case. Their label debut Finally, New expands upon the jittery futurism that places the production/rap duo on the margins of hip-hop, pop and electronic music. Going pedal to the metal on Finally, New is their only option, testing how far they can go in creating genre-bending experiences that draw upon a palette refined through the millennial urge to hoard music on the internet. —Jade Gomez

For all intents and purposes, Cola are Ought 2.0. The former band announced their formation alongside the latter’s dissolution last fall, with Ought’s Tim Darcy and Ben Stidworthy joining U.S. Girls/The Weather Station drummer Evan Cartwright to form the new trio. In many ways, Cola are picking up where their previous iteration left off, as revealed on singles “Blank Curtain,” “So Excited,” “Water Table” and “Degree”—their debut Deep In View is an album that stands shoulder to shoulder with anything in Ought’s esteemed catalog. But that’s not to say Cola aren’t shaping a nascent legacy of their own: Cartwright brings intriguing new rhythms into the fold, complicating Darcy and Stidworthy’s nervy, melodic post-punk in ways that feel true to its origins. —Scott Russell

More notable May 20 releases: Avi Kaplan: Floating On a Dream, Cave In: Heavy Pendulum, Charlie Hickey: Nervous At Night, Craig Finn: Legacy of Rentals, Delta Spirit: One Is One, Everything Everything: Raw Data Feel, fanclubwallet: You Have Got To Be Kidding Me, Flume: Palaces, Hanson: Red Blue Green, Harry Styles: Harry’s House, Hodgy: Entitled, Jo Schornikow: ALTAR, Jordana: Face the Wall, Lykke Li: Eyeye, mxmtoon: rising, Porridge Radio: Waterslide, Diving Board, Ladder to the Sky, Ravyn Lenae: Hypnos, SOAK: If I Never Know You Like This Again, SPICE: Viv, Tess Parks: And Those Who Were Seen Dancing