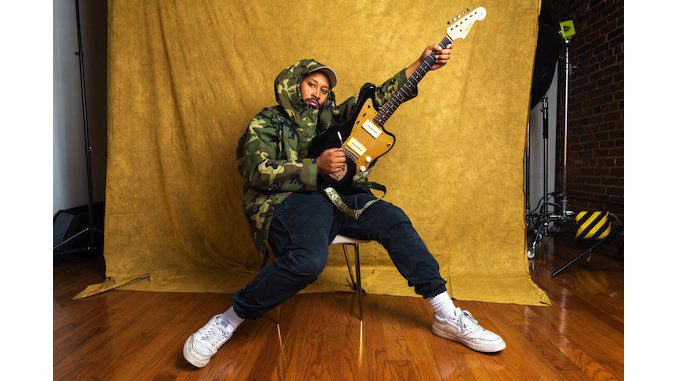 After breaking out in a big way with his acclaimed 2020 debut Live Forever, Bartees Strange (born Bartees Leon Cox, Jr.) is back with a new album, Farm to Table, coming June 17 on 4AD. “Cosigns,” our second preview of the album following recent single “Heavy Heart,” is out now alongside a music video (dir. Pooneh Ghana).

“Where […] Live Forever introduced the experiences and places that shaped Bartees (Flagey Brussels, Mustang Oklahoma), Farm to Table zeros in on the people—specifically his family—and those closest to him on his journey so far,” a press release explains. The new album is said to reckon with Strange’s ascent to indie-rock stardom, looking back on where he came from as he keeps moving onward and upward. You can read Farm to Table’s title as tying into that: He’s been working tirelessly to sow, and now it’s time for him to reap—and feast.

That’s cause for celebration, which is where “Cosigns” comes in: The track is a victory lap, set to the kind of stylistic alchemy Strange has made his name on. But it’s also unlike anything he’s released so far, combining electro-pop stomp with an Auto-Tuned hip-hop vocal, synths burbling as Strange shouts out the likes of Phoebe Bridgers, Lucy Dacus, Courtney Barnett and Bon Iver’s Justin Vernon. Backed by bass pluck, drum machine and spidery guitars, Strange warns, “I’m a thief, when things get big / Look, I’mma steal your fans,” then calls back to Live Forever as he boasts, “On Gomorrah I got cosigns, this advance gon’ ice my teeth / I pull up from 40 feet, at the Beacon for a week / With the Mossblerd pointed at you, bet I know y’all heard of me.” The track soon shifts into propulsive rock mode, crescendoing as Strange recites a poem he wrote in his early 20s: “How to be full, it’s the hardest to know / I keep consuming, I can’t give it up / Hungry as ever, it’s never enough / It’s never enough.”

Paste hailed Strange as one of 2020’s best new artists and Live Forever as one of that year’s best albums. Previous Farm to Table single “Heavy Heart” was one of our favorite songs of March 2022.

Following its June 17 digital release, Farm to Table comes to physical formats on Oct. 7. You can preorder the record right here and see its details down below, along with the “Cosigns” video and Strange’s tour dates.