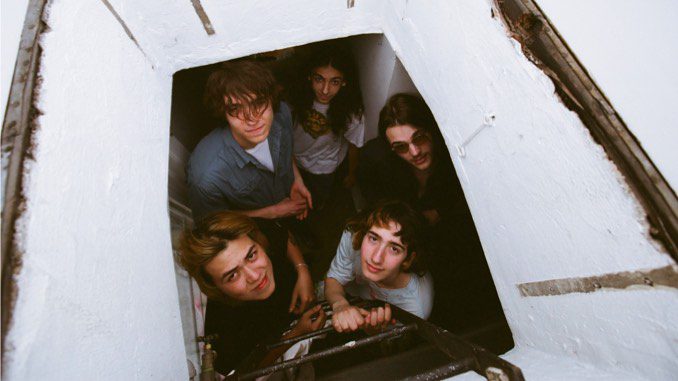 Where the band’s previous Projector previews have been invigorating with their ever-shifting dance-rock and post-punk terrains, “Projector” is a different, more restrained animal. The track maintains a mid-tempo chug as frontman Cameron Winter cryptically considers the personal and universal (“Decency of mankind has been all but slaughtered by the computer and the wire / Now I’m the only good man left on earth, so why don’t you want me?”) over spindly staccato guitars. The instrumental builds to a psych-rock drone in places, but always stops short of erupting outright, instead falling back behind the uncanny visions depicted in Winter’s vocals.

“The opening riff on ‘Projector’ was the first thing we ever wrote for the record. When the song was finished, it became a jumping off point for the rest of the album,” Winter recalls of the song. “We liked it because it was something decidedly different from the music we had been writing up to that point. Though we didn’t know it then, it’s fitting that ‘Projector’ became the title track on the record; it’s the song that ushered in the album’s sound.”

“Projector” follows “Disco” and “Low Era,” which ranked among Paste’s favorite songs of June and August, respectively. As you might imagine, Geese’s debut is one of our most-anticipated albums out there at the moment.

Geese are taking that buzz on the road with their first-ever North American headlining tour next spring—you’ll find those dates down below. This fall, they’ll perform at Shaky Knees Festival in Atlanta and Desert Daze in California, with E.U./U.K. shows to follow in February 2022 before the bulk of their North American run in March and April. Tickets go on sale this Friday, Sept. 24.

Below, check out “Projector,” with a visualizer by Alden Volney, and Geese’s complete tour itinerary.