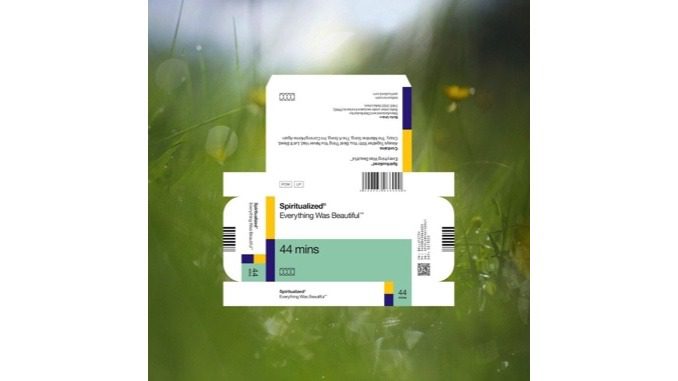 To follow Jason Pierce through an album’s length of psychic exploration requires a level of acceptance that things may look different once you re-enter your own tangible reality. There is no amount of pre-flight orientation that will prepare you for the Fantastic Voyage-style plunge you will take in his best work with Spiritualized. These expeditions through the chemically altered corridors of his soul have historically taken a toll on Pierce. After the last Spiritualized album, 2018’s And Nothing Hurt, he cast doubt on whether he had the strength to keep returning to these outer regions of the soul for answers. But after four years of re-acclimating to terrestrial life, Pierce is back for the ninth Spiritualized album, Everything Was Beautiful.

In the build-up to And Nothing Hurt, he shared his feelings candidly with fans that the chances were high that it would be the last time he would enter the studio. In a frank and honest interview with VICE around the album’s release, he equated the all-consuming obsession that it takes to achieve an album with his high standard of emotional weight to an athlete or a scientist being left behind by a world that keeps progressing into the future. Do fans still appreciate the old ways of doing things? “I’m not sure people want albums anymore,” he said with a sense of fatalism. “It seems like this endless quest to make these things, and I was questioning who listens to them. Does this warrant me to hate myself for the two, three years it takes to make them?” While he still occasionally goes by his “J Spaceman” moniker, the demise of his beloved and influential psych band Spacemen 3 has allowed him to be much more introspective lyrically moving forward. The question now has to be asked: Without Spiritualized, what would Pierce be leaving behind if he hung up his space helmet for good?

Hearing the answer to that question results in nothing short of a revelation, as Everything Was Beautiful marks another career-best in Spiritualized’s euphoric discography. Listening to the record, there is a sense of familiarity to the sonic effects that only Pierce’s music can evoke. Like experiencing deja vu to a time when your nerves were confused from anesthesia, or your body losing inventory of its own weight in the moments after experiencing blunt force trauma, the album overwhelms the senses with bombastic, heavenly textures and claustrophobic moments you fear might never resolve. Each side of the coin works in tandem as Pierce suits up once again to dredge up any hidden feelings he had let lie dormant since his last voyage.

The album begins much like Spiritualized’s most celebrated album, Ladies and Gentlemen We Are Floating In Space, as a female voice offers a dispatch from some far-off control center to announce the title of the album. Much like that album’s classic opener, the song that proceeds here, “Always Together With You,” acts as a calming overture for the album before the turbulence to come. Pierce offers to stand in for a long list of unachievable inanimate objects and concepts in the name of love (“If you want a rocket ship / I would be a rocket ship for you”) as the song reaches Phil Spector levels of audio romance—with strings, horns and a choir aiding his hopeful message. As the vocals layer and intertwine, the song’s narrative shifts from love to redemption as Pierce focuses on the beauty you can achieve in life without relying on drugs to inspire it. “Just when you thought your life came in a bag of white / Sucked up a silver tube, changes your attitude,” he sings, offering no clarification of the double entendre of the “silver tube” he mentions. Is it a dirty, powder-caked straw, or some new method of transportation into another dimension’s vantage point from which you can see the world differently? Maybe it can be both.

On “Best Thing You Never Had (The D Song),” Pierce delves into the gospel-tinged krautrock the band perfected on Spiritualized’s post-Floating In Space releases. The narrative offers another cautionary bit of wisdom against the use of substances from someone who more than doubled their Malcolm Gladwell 10,000 hours nodding in and out of consciousness. “Oh and your eyes roll back / They roll back to where you been / Oh and you roll that die, you never get a roll to win,” he sings, later backing it up in the song’s chorus, explaining that it will “Be a long ride down / From the best thing you never had.”

Pierce has never been shy about how important the music of Iggy Pop it to his life and music, and with the sweetly titled “Let It Bleed (For Iggy),” he showcases that admiration like a prominently displayed monument. While the song may not entirely be an ode to Jim Osterberg’s brilliance, the streetwalkin’ cheetah is one of the principled figures in Pierce’s narrative that he had hoped to honor. “I labored over these words too long / They’re nothing to behold,” he shrugs as he fears any true emotion is being written out of his own songs. He continues, “I wanted it to cut deeper and darker for you / I wanted it to show wisdom where honesty’s due.” It’s easy to assume that when Pierce proposes the affirmation to “open up and let it bleed,” he is alluding to the famous images of Iggy’s chest gushing blood after he cut himself on broken pint glasses at a Stooges gig at Max’s Kansas City in 1973. But as fans of both of these artists know, the emotional excavation they each go through in their art is much more dangerous and takes more time to heal.

Pierce co-wrote and duets on the sweet country waltz “Crazy” with alt-country singer Nikki Lane. In their time, Spacemen 3’s albums seemed like a continuation of the drone-heavy transportive psych experiments of The Velvet Underground with John Cale. When Pierce is writing in country mode like he is on this track, you can imagine the interstellar cosmic country that Gram Parsons would have been making with The Flying Burrito Brothers if his enthusiasm for the group had continued after they found peace in the valley for that “Hippie Boy” in the last moments of The Gilded Palace of Sin.

From there, the towering riffs and guitar freakouts of “The A Song (Laid in Your Arms)” provide a late-in-the-runtime dose of reality-shifting psychedelic pyrotechnics. The song deals with the moments we waste in our lives casting judgment on others: “One man’s crime is another man’s cure / And you’re gone.” Horns and fuzzed-out guitars pile into the song’s freeform midsection before coming out the other side sounding even more triumphant than when they started. Before the song concludes, the instruments are given the chance to get as far out as ever, with a slow fade like the drain-like gravitational pull of a black hole.

On the album’s cataclysmic climax “I’m Coming Home Again,” Pierce leaves the listener with a feeling of unnerving uncertainty. A heavy sense of panic washes over the track’s slow, menacing build, as if he’s realizing he forgot to place a decimal point in the right place just as he pushes ahead with his go-for-broke suicide mission. Fresh out of answers after nearly 30 years of searching, Pierce sees his options for moving forward in life shrinking from view. “I’ve been there and I’ve been back again,” he sings, “Gonna dull it with lorazepam / Kind’ve had it with philosophy, ‘cause I’m thinking I am but I’m failing to be / Let it fall, take it quiet, backslide and I’m gone again.”

Whether it’s the character Faith losing her faith or Mary saying she has a mind as sturdy as the Tower of Babel, Pierce sees the people around him disappearing like embers in the night sky. All he can do now is “count down 10” and step on the gas until there isn’t any left. He’s “coming home” with or without the team he assembled for his voyage, and who’s to say if he is going to find peace in the process? As the song stretches towards 10 minutes, Pierce cannot hide from the answers he found, both in its crescendo and throughout the rest of his journey on Everything Was Beautiful. Giving all of yourself to create beauty from past trauma means that leaving something of yourself behind in the process is an unavoidable bargain.