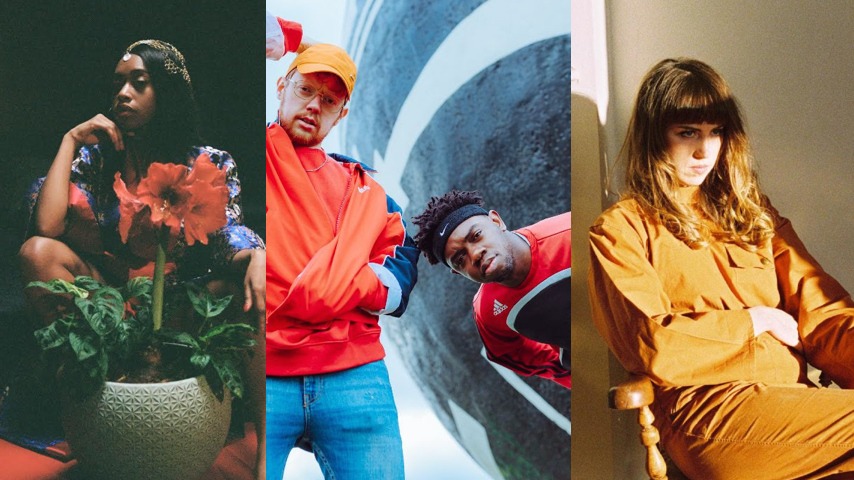 Six decades ago, Irish music didn’t stray much outside trad or show bands, aka well-known cover bands. Sure, they won the Eurovision song contest consistently with saccharine ballads, but the scope of Irish music left something to be desired.

In 2020, artists from the Emerald Isle are simply bursting at the seams with their sonic diversity. Folks may think of Ireland as a homogenous island, filled with people in paddy caps and thick woollen sweaters, but they couldn’t be more wrong. From the thriving hip-hop scene to beloved post-punk groups, there’s a little something for everyone once you dip your toe into the Irish scene.

This is by no means an exhaustive list, but below are 13 must-listen acts hailing from the Isle of Ireland:

Aoife Nessa Frances’ debut album Land of No Junction, one of the few good things to come out of 2020, doesn’t feel like a first record. With her breezy early ’70s sound, the rich timbre of her voice and atmospheric production, she possesses a world-weariness that few other newcomers can evoke. Frances recorded the LP at Oxford Lane Music Society Studio in Ranelagh, Dublin, accompanied by Brendan Jenkinson (keyboard, engineering and mixing), Brendan Doherty (percussion) and Ailbhe Nic Oireachtaigh (strings). Land of No Junction actually gets its name from Frances’ mishearing of Nugent’s boyhood trips to Wales, she says, “passing through a station called Llandudno Junction… Land of No Junction later became a place in itself. A liminal space – a dark vast landscape to visit in dreams.”

If you’ve ever ended up sobbing in public over a breakup, you’re bound to relate to “Another Day (kfc),” the alt-country track from Ciara Mary-Alice Thompson, otherwise known as CMAT. So far it’s her only single (released at the end of April), but Thompson has made waves in very little time with her infectiously camp, tongue-in-cheek nature, evoking Dolly Parton and Lily Allen at the same time. And we’d be remiss if we didn’t mention her hilarious accompanying music video, which features some frenzied dancing that deserves the Tik Tok treatment. Her new single “Rodney,” which she says is “about what happens when someone you admire doesn’t respect you,” will be released on June 24.

When Denise Chaila raps you can hear the smile on her face as she lines up every word just so, savoring them before spitting them out in an enviable flow. She explores her own identity as a Zambia-born, Co. Clare-raised artist on her EP Duel Citizenship and her latest single “Chaila,” released on May 29, sums up the ire of someone whose name is repeatedly mispronounced. Chaila is the crown princess of Emerald Isle hip-hop, integrating the Irish language on her recent release “Down” and summing up the scene succinctly on the track “Copper Bullet”: “What’s Irish rap? It’s a sound that you can’t predict.” We’re waiting with bated breath to hear her debut album, due out later this year on narolane records.

Do you ever miss good, old-fashioned ’90s R&B? Well, Erica Cody Kennedy Smith, known onstage as Erica Cody, is ready to serve it up in spades. Her debut EP Leoness is laden with smooth, makeout-ready beats and topped with Cody’s expansive vocal range. The standout track by far is “Where U Really From,” an indictment of the pervasive racism in Ireland she experiences as a black woman and, at the same time, a joyous celebration of her identity. Hers is a voice well worth listening to.

Hailing from Donegal, that wild and distant corner of Ireland, artist Eve Belle brings her own spin to Irish indie pop. She’s released several singles so far this year, including blue bops “Begging for Rain” and “Smithereens,” but the most hard-hitting is “Homesick,” a melancholic look at the housing shortage in Ireland and seeing your home country push you out in favor of tourists. “I look for solutions but in every direction / I see empty glass buildings, planned to perfection,” Belle sings, calling to mind the Irish government’s prioritization of multinational corporations over their own citizens. Ever prolific, she’s spending her quarantine recording new demos.

Repression has long blighted the Irish psyche, but in recent years activists and artists have worked tirelessly to promote an openness about mental health. Among them is Junk Drawer, the post-punk band from Belfast whose 2020 album Ready For The House is not just a fantastic piece of slacker rock, but also a vulnerable look into the lives of brothers/lyricists Jake and Stevie Lennox. Among the tracks on the album is “Year Of The Sofa,” which won the Northern Ireland Music Prize for Best Single in 2019 and portrays what it’s like returning to live with their parents and struggling with both epilepsy and unemployment. Along with bandmates Brian Coney (guitar and bass) and Rory Dee (drums, guitar, bass, synth, piano and backing vocals), the Lennox brothers are ready to bare their souls and brandish their instruments.

Anyone who thinks the Irish language is dying needs to hear KNEECAP, the Belfast trio whose electric rhymes on as gaeilge revive their native tongue with defibrillator-level energy. Their songs range in subject from their desire for a united Ireland to a drug-fueled night out, with the tongue-twisting lyrics by Mo Chara and Móglaí Bap backed by thumping beats from DJ Próvaí (he even samples the BBC News theme on “Get Your Brits Out”). Their EP Irish Degenerates is due out this year.

Dublin folk group Lankum represent a constant conversation between the past, present and future of Irish music, and we’re all lucky to be eavesdropping. Cormac MacDiarmada, Radie Peat and brothers Ian and Daragh Lynch combine elements of traditional Irish sounds, including the uilleann pipes and the fiddle, and their own fresh sonic ideas on each track. Their 2019 album The Livelong Day, released on Rough Trade Records, includes both well-worn folk songs and their own original tracks. Their ethereal four-part harmonies are best experienced live, but thankfully we have the next best thing below: their newly released NPR Tiny Desk Concert.

Reminiscent of early Angel Olsen, Maija Sofia won over listeners with her richly textured debut album Bath Time in November 2019. The LP was nominated for Album of The Year 2019 at the RTÉ Choice Music Prize, a well-earned accolade for one of the most intoxicating voices in Irish indie folk. The Co. Galway native, now based in Dublin, found inspiration in a strange constellation of characters, from socialite and Andy Warhol superstar Edie Sedgwick to murder victim Bridget Cleary. Sofia is currently working on her sophomore album, which will be released in 2021.

2020 has been a string of cancellations so far, but be sure to mark July 17 in your calendar since that’s the day Silverbacks release their debut album Fad via Central Tones. Daniel O’Kelly (vox, guitars), Kilian O’Kelly (guitars, vox), Emma Hanlon (bass, vox), Peader Kearney (guitar) and Gary Wickham (drums) use their time on the record to dissect the pop culture that consumes our every waking moment. Silverbacks has supported Irish rock darlings Girl Band on their sold-out U.K. tour, and seem destined to amass the same cult-like following. The Dublin five-piece brings together the goofiness of Pavement and the guitar frenzy of Car Seat Headrest at their best.

Soda Blonde’s Faye O’Rourke, Adam O’Regan, Dylan Lynch and Donagh Seaver O’Leary will be familiar to anyone who follows Irish music, since the four were formerly in the critically acclaimed indie outfit Little Green Cars. Soda Blonde emerged in 2019 fully realized in their sound: soaring dream pop haloed by O’Rourke’s silky vocals. In addition to producing, the four-piece also create all of the accompanying artwork for their music. On May 29 they shared isolation – content, their quarantine EP.

Max Zanga and Matt O form the duo better known as Tebi Rex, the Irish hip hop group who bring together poetic sensibilities and delicious pop hooks seamlessly. Tebi Rex have skyrocketed on the international stage, as their music has appeared on the hit television show Normal People, and the pair were due to play at SXSW before COVID-19 derailed live music for the foreseeable future. The Young Will Eat The Old, their 2019 debut album, is a must listen, but the pair also shared their wry new single “White Boy of the Month” in May. Stay tuned for their mixtape I Got My Whole, out on June 12.

TPM aka Tax Payers’ Money aka Co. Louth brothers Charles and Andrew Hendy aren’t afraid to go after national broadcaster RTÉ or call out major political parties (“Fuck Fine Gael and fuck Fianna Fáil too” they repeat on their 2020 single “TPM Don’t Have Your Money”) on their hilarious tracks, and it’s this fearlessness that elevates them in the Irish music scene. Their pointed commentary is always delivered in a thick accent with a smirk on their faces as they thumb their noses at the establishment. And if rap isn’t quite your speed, the brothers also perform folk music as The Mary Wallopers with fellow Dundalk musician Seán McKenna.