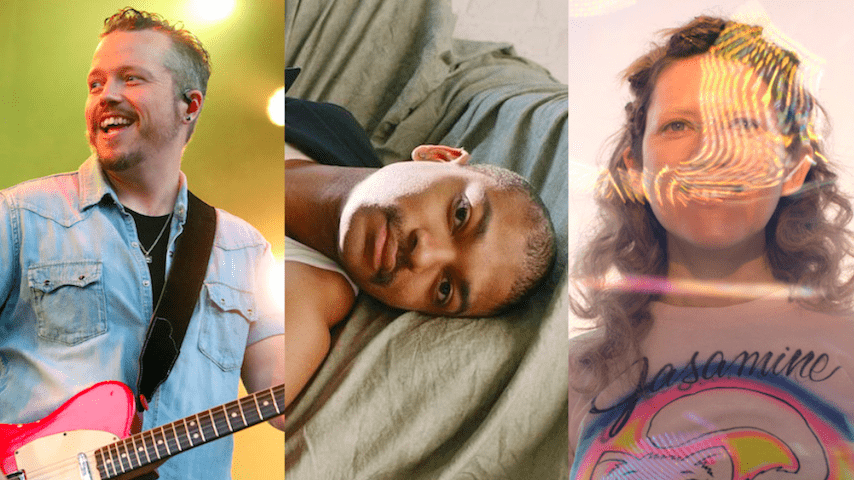 We were spoiled with great new albums this past month. Music fans received records from pop behemoths like Charli XCX, Carly Rae Jepsen and Perfume Genius, plus contemporary rock giant Jason Isbell and the fascinating, perpetual shape-shifter Moses Sumney. When choosing our favorite songs from May, we just had to include selections from those albums, plus tracks from lesser-known names like Dehd, Fusilier and Johanna Warren. From trip-hop and folk to rap and classic rock, check out 15 songs that blew us away in May.

Listen to our Best Songs of May 2020 playlist on Spotify.

In a positively dumbfounding maneuver, Carly Rae Jepsen this month shared a collection of b-sides that rival the original album itself. Dedicated Side B is the sister album to 2019’s Dedicated, and it’s home to 12 lush, sparkly, complicated love songs—CRJ’s signature style! One of the best of those is “Stay Away,” an improvement on John Mayer’s “Gravity.” “My home is your body / how can I stay away?” she asks. It’s sexy, but intimate in ways that don’t involve sex at all. In addition to its emotional implications, “Stay Away” would make a killer dancefloor track. Until we can dance together again, Dedicated Side B makes for a thrilling substitute for cathartic club collaborations. —Ellen Johnson

Charli is at her most convincing on “7 years,” the album’s heart, as she sorts out her own priorities stream-of-consciousness style and lives out her domestic dreams. It’s Charli’s idea of rhythmic balladry (which gives us the album’s most memeable lyric: “Without the holy matrimony, I’m wife”), but more than that it’s a declaration of commitment. —Austin Jones

“Loner” explodes in a synth-y fit of “hey hey heys” and tender electric guitar breaks. For perhaps the first time in their bandhood, Dehd sound like they walked straight out of a neon-colored new wave music video. —Ellen Johnson

“Upstream” is a sweeping, minimal R&B-pop song led by awe-inspiring strings, and each delicate ripple of Fusilier’s voice uncovers a deep ache or triumph. It’s an elegant, dazzling and vulnerable work from an artist whose rich songwriting and sonic dynamism makes him an artist to watch. —Lizzie Manno

“Santa Fe” is doused in wonder and brimming with imagination and possibility. Palatial strings and gentle synths cascade around Gregory Uhlmann and Meg Duffy’s vocals, which intertwine with beautiful hums. The song is a walk down memory lane as Uhlmann recalls various trips to visit his grandparents. He paints a heavenly domestic scene of simple pleasures: “the smell of piñon,” “dogs running up the hill” and feeling “like an explorer” as he wrote notes on the pages of Sea of Cortez. —Lizzie Manno

“Don’t Wanna” is the sixth song that HAIM have shared ahead of their album. The track itself falls under no simple labels: a crisp and clean-cut drum track melds seamlessly with guitar, bass and vocals that could have been pulled straight from a Fleetwood Mac record. —Lia Pikus

“Being your daddy comes natural / The roses just know how to grow,” Jason Isbell sings on “Letting You Go,” the final song on Isbell’s and the 400 Unit’s excellent new album Reunions, which releases a series of timely social outcries alongside intimate personal narratives. Last year, 400 Unit member and Isbell’s wife Amanda Shires sang on the lovely (but heartbreaking if you let it be) song “My Only Child,” from her supergroup The Highwomen’s self-titled album. It’s Isbell’s turn to express parental devotion on the equally beautiful “Letting You Go,” which tracks their daughter Mercy’s life from the moment she’s brought home from the hospital to her predicted first heartbreak down the road. Isbell has always had a flair for the tender, but only recently have those gentle, quiet feelings been focused on the fatherly kind. “Letting You Go” is sure to devastate any father who hears it, but even for those of us who aren’t parents, the song lands like a sweet ode to the finite nature of time and growing up. It’s a comfort to know Isbell will be there to sing about all stages of life, including the “hard part”: letting go of the ones you love. —Ellen Johnson

Johanna Warren decided to start a brash folk riot in the form of her fourth and final promo single “Twisted,” taken from her new album Chaotic Good. It might very well be the angriest and most impassioned folk track of the year—gurgling screams ring out over gleaming guitars, but even fans of dainty folk will gravitate to her simmering raw emotions. —Lizzie Manno

With buzzing, melodious synths, glockenspiels and an intoxicating beat, “In Our House” is the sound of radical joy. Its experimental pop glistens, and the rumble of unflinching jubilation underpins it all. This is the kind of euphoria that’s transformative and fully immersive, and you can tell by Cota’s emotive dancing that she feels this unspoken rush. —Lizzie Manno

While many of their contemporaries are hellbent on 1980s homages, Nation of Language’s songwriting recalls 2000s bands like Arcade Fire and The National just as much as ’80s golden era groups. You can hear Matt Berninger-like tone and pacing on “Tournament,” James Murphy’s warmth and exhilaration on “Rush & Fever,” the zest and pomp of Cut Copy’s Dan Whitford on “Indignities” and Arcade Fire-sized elation on “The Wall & I.” —Lizzie Manno

“Birthmark” is dramatic, radiant and at its core, joyfully alive. It’s silvery yet colorful and glitchy yet smooth. If you were wondering what would happen if beatific art-pop, invigorating dance-rock and limitless trip-hop collided, look no further than this triumphant new single from No Joy. —Lizzie Manno

Opener “Whole Life” sets the album on fire immediately. Its strings, guitars and pianos are theatrically formless, and Hadreas’ dense, smoky croons about blissfully accepting the inevitability of aging envelop themselves like ouroboroses. —Max Freedman

The song itself is a quiet triumph, gritty guitar strums and glistening instrumentals underpinning Bridgers’ softly-sung vocals. “I used to light you up / Now I can’t even get you to play the drums / ‘Cause I don’t know what I want, Until I fuck it up,” Bridgers sings. —Lia Pikus

Listen to our Best Songs of May 2020 playlist on Spotify.