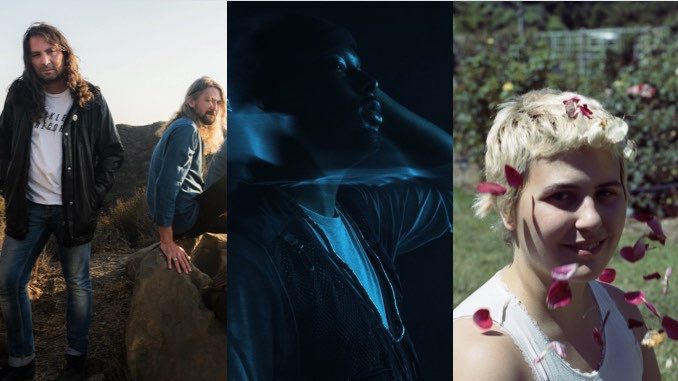 If some weirdo forced us to pick our favorite war, we would pick The War on Drugs. The Adam Granduciel-led rock juggernauts released their first new album since 2017 today (Oct. 29), finishing out October on a high note. That’s one of many records that deserve—better yet, demand—your time and attention on this fine New Music Friday, with London jazz star Theon Cross’ Intra-I and Lily Konigsberg of Palberta’s first proper solo album also very much in the mix. You know what to do.

Bat Fangs: Queen of My World

Queen of My World is the second LP from Carrboro, North Carolina/Washington, D.C. duo Bat Fangs, i.e., vocalist/guitarist Betsy Wright (Ex Hex) and drummer Laura King (Flesh Wounds, Speed Stick). The dream of the ‘80s is alive in this band, who describe their sound as “heady heavy music for third eyes and stiff upper lips”—in the context of this record, we’d characterize it first and foremost as bright, boisterous rock ‘n’ roll, replete with arena-ready riffs and melodic shout-along vocals. While most of Queen of My World dives headfirst into that winking glam theatricality and bombast, evoking fellow throwback-y acts like White Reaper and Sheer Mag, Bat Fangs also show off their mystic side on “Psychic Eye,” pulling it all together on epic instrumental closer “Into the Weave.” What a trip. —Scott Russell

Of course Billy Bragg is singing about resilience on his latest album: in one form or another, he’s been exploring that idea all along. The Million Things That Never Happened is Bragg’s first solo LP since 2013, and a million things have definitely happened since then, including a worldwide surge in political nativism, Black Lives Matter and a growing awareness of police brutality, and a global pandemic. In other words, there has been plenty to test the resilience of a singer and songwriter with Bragg’s outlook. Although time has softened the sharp edges that characterized Bragg as a young man, and the sound of his music has evolved, he has never strayed far from the themes that inspire him. They’re apparent on the new album in “Mid-Century Modern,” where he acknowledges that even his own views remain a work in progress. Admitting that you don’t have all the answers is an act of deference from a guy whose songs have been rallying cries for equality and justice for close to 40 years, but Bragg is self-assured enough to open himself up to new perspectives. —Eric R. Danton

Teenaged Brooklyn rockers Geese grabbed our attention with their stellar first single over the summer and, with the release of their much-anticipated debut album Projector, show zero signs of letting it go. The quintet’s sound fits most comfortably in the post-punk bucket, but placing any one descriptor on it is a mistake—Geese’s raison d’être is stylistic multiplicity, and their songs never occupy a single space for long, shifting fluidly between angular precision and psychedelic sprawl, all while remaining perpetually danceable and energetic. Frontman Cameron Winter’s lyrics inhabit the perspectives of various shadowy characters, spinning tales of anxiety and annihilation that imbue the band’s mercurial instrumentation with a gripping darkness. All told, Projector is an exhilarating first statement from a preternaturally talented band, bottled rock lightning with roots in decades of compelling musical influence. —Scott Russell

The proper full-length solo debut of Palberta’s Lily Konigsberg has been quite a while in the making. The Brooklyn singer/songwriter worked (and reworked) on these songs from 2016 on, with an assist from producer Nate Amos (of Water From Your Eyes), whose text message to Konigsberg inspired the album’s title—it’s a self-confrontation that reveals no shortage of emotions, nor sounds. Lily We Need to Talk Now runs the gamut from the ebullient indie rock of “That’s The Way I Like It” and “True” to the jazzy and even avant-garde art-pop of “Don’t Be Lazy With Me,” “Hark” and “Goodbye,” opening its arms to slick dance music (“Sweat Forever,” “Alone”), fuzzy proto-punk (“Bad Boy”) hooky folk-rock (“Roses, Again”) and synth-wreathed power-pop (Adam Schlesinger tribute “Proud Home”) along the way. You come away from the record wondering what Konigsberg can’t do, impressed by the scope and vibrance of her stylistic vision, and the ease with which she inhabits her many musical selves. —Scott Russell

Lotic’s Water evades categorization, scratching every pressure and pleasure point in the brain with her gorgeous meditations on love and loss. J’Kerian Morgan is behind the mesmerizing project, collaging her emotions with high-pitched verses and eerie synths that reach anxiety-inducing heights. An underlying sensuality slips through, along with hints of jazz and hip-hop for a sensory overload that is irresistible and hypnotic. Morgan has mastered the balancing act of these sounds to such an extent that it sounds unlike anything else, drawing from its own palette. —Jade Gomez

Lunar Vacation: Inside Every Fig Is A Dead Wasp

The full-length (and Keeled Scales) debut of Atlanta’s Lunar Vacation, Inside Every Fig Is a Dead Wasp arrives less than a week after the band’s hometown Shaky Knees set—one of the festival’s best, if you ask us. Co-founding songwriters, vocalists and guitarists Grace Repasky and Maggie Geeslin lead the four-piece, who teamed with Grouplove’s Daniel Gleason to record their first album. The result melds the timelessly bright and precise melodies of Alvvays with breezy psychedelia and intimate, singer/songwriter-style introspection—elements that combine to irresistible effect on tracks like lead single “Shrug.” Listening to this record feels like reuniting with an old friend, entering a space where your triumphs are celebrated and your troubles are gently lifted off your chest. —Scott Russell

Mick Jenkins: Elephant In The Room

When it came to addressing the Elephant In The Room, Mick Jenkins took his time, then hurried up: The Chicago emcee spent most of 2021 hopping on other artists’ songs, the only exception being his June solo single “Truffles.” It was just this month that he shared another, “Contacts,” and announced his third studio album, out now via Cinematic Music Group. Its title is more than just a familiar phrase (or clever boast): Elephant In The Room is Jenkins’ effort to voice difficult truths both personal and universal, “from my estranged relationship with my father to friendships that don’t feel the same anymore to the even more basic idea of acknowledging that I need help.” There’s a vital power in looking one’s issues in the eye, particularly nowadays, when it feels like the problems just keep piling up, and Jenkins and his collaborators do just that, taking aim at the elephant through a potent combination of fearless lyricism and keen musicality. —Scott Russell

New York singer/songwriter and producer Sam Evian decamped from the big city to the quiet Catskills to craft his Fat Possum debut album, a vivid collection of psych-pop tracks that feel like freedom. Evian and his partner Hannah Cohen established the Flying Cloud Recordings studio within their wilderness refuge, immersing themselves in nature and leaving the towering stresses of the rat race capital behind. As you might imagine, Time to Melt oozes serenity, yet it does so with an engaging vibrance, as funky bass lines and dreamy keys factor prominently into Evian’s polished emulations of ‘70s rock, pop and soul. The album is at its most entrancing on the floaty, Cohen-featuring “Dream Free,” and its most celebratory amid the warm horns of “Easy to Love.” But Time to Melt is an escape from beginning to end, as Evian brings his sought-after studio wizardry to bear on a pandemic record with timeless uplift. —Scott Russell

When Theon Cross isn’t working with Sons of Kemet, he’s making incredible connections with Jamaican soundsystem culture through his instrument of choice: the tuba. On his latest solo effort Intra-I (meaning “Within Self”), Cross explores a corner of the U.K.’s musical landscape by dabbling in Caribbean sounds underscored with lush dance textures while showing off his technical prowess on the tuba, which is neither grating, nor overwhelming. Cross allows himself to take a backseat as he invites a wide array of collaborators to expand his vision while showing his proficiency as a composer and musician. —Jade Gomez

On I Don’t Live Here Anymore, The War on Drugs had a decision to make at the metaphorical fork in the road: Would they continue down the path of being a successful—albeit predictable—guitar band, or take a risk and produce work outside of their wheelhouse? Somehow, the answer turned out to be both. Like Wagonwheel Blues before it, the bones of I Don’t Live Here Anymore are strong and sturdy, but its execution is more nuanced, more daring, more personal. Adam Granduciel has always sung as if his lips were pressed to someone’s ear and that intimacy remains intact, particularly in the album’s most vulnerable moments. The tenderness on opener and lead single “Living Proof” is wrapped in lush piano chords and simple lyricism about feeling foreign to a place you once called home. But the most thrilling parts of the LP are in the center, the space where The War on Drugs feel free enough to deviate from the expectations that made them mainstream darlings. Over the past 13 years—and with each project—The War on Drugs have continuously grown into fuller and more realized versions of themselves. I Don’t Live Here Anymore is fitting for their newest form: revered musicians with over a decade of quality music under their belts who never lost sight of the prize. —Candace McDuffie