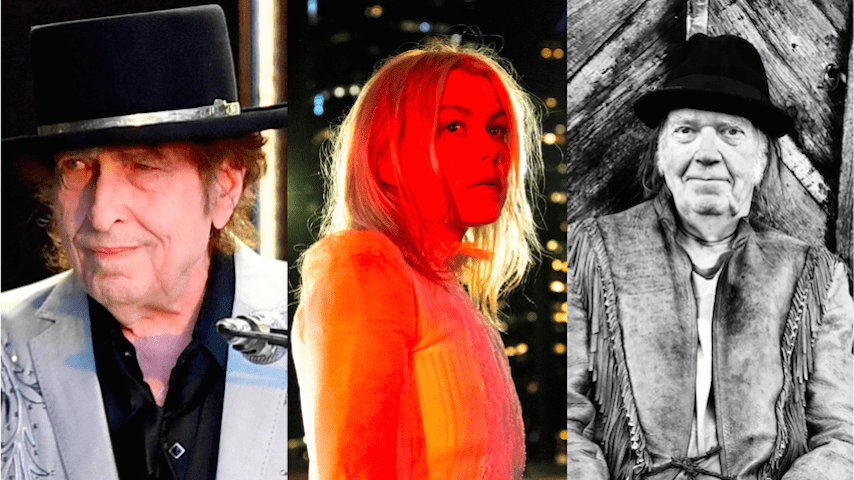 Though many albums continue to be delayed or shelved indefinitely, we’ve still experienced a steady drip of compelling new albums. This New Music Friday (June 19) is a particularly fruitful one as it contains several releases from our list of most-anticipated June albums, and two of America’s greatest songwriters: Bob Dylan and Neil Young. If you haven’t heard the new Phoebe Bridgers album yet, which dropped yesterday, one day ahead of schedule, now’s your chance to give it a spin, along with several other must-hear releases listed below.

Berlin-based electronic provocateurs Amnesia Scanner have released their second album via PAN, the follow-up to 2018’s Another Life. The record, titled Tearless, features popular hardcore group Code Orange as well as Lalita and LYZZA. The duo’s album was inspired by environmental issues facing their home country of Finland before the COVID-19 outbreak. Described as a “breakup album from the planet,” their new material seems increasingly relevant as we venture further into uncharted territory thanks to the universal lockdown we’re facing. —Austin Jones

How appropriate that Bob Dylan is back, in the midst of a global pandemic and deepening civil rights crisis, with his first album of original material in eight years. There’s something almost reassuring about a musician who has remained willfully opaque for decades reemerging at this particular moment to croak existential riddles over hot blues licks. It’s tempting to see Rough and Rowdy Ways as one of those late-career ruminations on mortality that often seem to come from musicians of a certain age, or a full-circle accounting that reconnects Dylan, now 79, with his early days as a folk singer with a socially conscious bent. On the surface, the album could be either of those things, or both: After all, he gives over nearly 17 minutes of his 39th studio LP to a single song about the day that John F. Kennedy was assassinated, in 1963, when the singer was 22. Yet the idea that he’s revisiting his youth, or settling his affairs, is too simple, too predictable, for a wily contrarian like Dylan. Since when has he ever done the obvious thing? Indeed, his latest comes after three albums spent rummaging around in the American songbook, an exercise that amounted to a gracious courtesy call from a guy who knows a few things about writing songs that endure. It’s hard to say what effect, if any, burrowing into those touchstone tunes has had on his own writing. Rough and Rowdy Ways simply sounds like Dylan, at his most Dylan-esque. These 10 tracks are steeped in American history, classical symbolism and biblical imagery, to say nothing of the literary asides, pop-culture references and musical allusions, from Shakespeare and William Blake to Ginsburg, Corso and Kerouac, Indiana Jones to Altamont, Chopin to Charlie Parker to “them British bad boys, the Rolling Stones,” as Dylan puts it on opener “I Contain Multitudes.” —Eric R. Danton

Braids released “Eclipse (Ashley),” their first new song from their new album Shadow Offering at the tail end of last year. The sublime song draws its influence from ideas as universal as the stars and as intimate as friendship to craft a uniquely divine single. “Eclipse (Ashley)” is a song of devotion, not to a lover or a god, but to lead singer Raphaelle Standell-Preston’s best friend Ashely Obscura, after whom the song is named. Humbled by the sight of a solar eclipse, Standell-Preston uses this unique cosmic event to meditate on the human relationships that surround her. Over a meandering piano line, she gathers her grand thoughts with Björk-like exuberance, singing, “Myself, at the age of 27 / Questioning that the universe doesn’t trust in me, have a plan for me.” Despite the lack of universal structure, Standell-Preston finds solace in the company of her friend, which is arguably as spiritual as the skies. —Hayden Goodridge

London duo Jockstrap (aka Georgia Ellery and Taylor Skye) have shared Wicked City, their second EP and debut for Warp Records. It follows 2018’s Love is the Key to the City. Jockstrap are quite enigmatic in sound—take “The City,” for example, which fuses glitchy industrial with showtune-y piano pop and glazed post-punk, and though that sounds insane on paper, it’s not only mind-numbingly fascinating, but also surprisingly coherent. “The heavy autobiographical narrative of Wicked City is married to an expressive and limitless sound world; influenced by everything we have ever musically absorbed and moulded with a ‘fuck it’ attitude,” Ellery says. You can certainly hear that “fuck it” ethos on this EP. Their strange, harsh-meets-soft pop is paired with poetic tales, and it’s the sound of deconstruction and reinvention—both sonic and emotional. —Lizzie Manno

Homegrown, one of Neil Young’s lost albums from 46 years ago has emerged today, and it contains several songs that were never published or heard previously. It was recorded on analog back in 1974 and early 1975, and the original stereo master tapes were then recently restored by John Hanlon and mastered by Chris Bellman at Bernie Grundman Mastering. “This album Homegrown should have been there for you a couple of years after Harvest,” Young says. “It’s the sad side of a love affair. The damage done. The heartache. I just couldn’t listen to it. I wanted to move on. So I kept it to myself, hidden away in the vault, on the shelf, in the back of my mind….but I should have shared it. It’s actually beautiful. That’s why I made it in the first place. Sometimes life hurts. You know what I mean. This is the one that got away.” —Lizzie Manno

Her sophomore album Punisher cements what may be Bridgers’ most understated gift of all: her seemingly innate ability to capture the mundanity of modern sadness in song. Tucked in among the record’s memorable melodies, clever arrangements and impressive guests are a steady stream of details that lend plainspoken perspective to Bridgers’ emotional highs and (mostly) lows. These kinds of details ground her work in the same way shading makes a still life painting pop. They make them feel not just sad, but real. As an example, look back to “Funeral,” one of the highlights of Bridgers’ 2017 debut Stranger in the Alps. It’s a devastating tune about death and depression, and if it ended at the three-minute mark, it would still be a stunner. But she tacks on an extra bit that contextualizes the rest of the song: “It’s 4 a.m. again,” she sings flatly, “and I’m doing nothing again.” And all of a sudden … you’re there. Because you’ve been there (probably), and because Bridgers has been there, too, and she knows how to make this song about a stranger’s overdose into a highly relatable moment. The story now has a place to sit—in a dark room, screen glowing, silence deafening, thoughts racing. Again. Those kinds of moments pop up all over Punisher, which is generally noisier and more upbeat than its predecessor. The album’s clear standout (and one of the year’s best songs), “Kyoto,” features Bridgers’ crunchiest guitar riffs yet, a soaring chorus and the travails of dealing with someone who can’t quite get their shit together juxtaposed with a wander through a 7-11 and trip to the suburbs to stare at chemtrails. —Ben Salmon

Last year, a mysterious funk and soul group called Sault arrived out of nowhere with two albums, titled 5 and 7. There was no information about their members, and they weren’t on a big label, but they drew rapturous critical acclaim from The Guardian, NPR, Bandcamp and Paste (placing them on our list of British Acts You Need to Know in 2020), and they also received radio play from the best tastemaker radio station in the U.S., KEXP. Last week, the group began teasing their new album on socials, releasing a statement on Twitter and posting song snippets on Instagram. “We present our first ‘Untitled’ album to mark a moment in time where we as Black People, and of Black Origin are fighting for our lives,” they wrote. “RIP George Floyd and all those who have suffered from police brutality and systemic racism. Change is happening…We are focused.” We know a bit more about the group now (more on that very soon), but in the meantime, this is undoubtedly the album of the Movement—radical, passionate, resilient and celebratory—and it’s the sound of a revolution that will not be ignored and sure as hell won’t be televised. —Lizzie Manno

Classic post-punk outfit Wire have shared their new album 10:20 via the band’s label, pinkflag. The album features unused material from previous albums as well as new versions of previously recorded songs, which have since evolved through their live shows. The album was originally set for a vinyl-only release on Record Store Day, but has now been released widely on all formats. After sharing the first glimpse of the record, “Small Black Reptile,” earlier this year, they shared another track “The Art of Persistence.” This is the first studio recording of the song, having featured as a rehearsal room jam on their 2000 EP The Third Day and as a live version on a bootleg album from that year, Recycling Sherwood Forest. The version from The Third Day, which you can hear on Spotify, is quite bare and grating in its monochromatic drone, while this newly-recorded version is far more lush and pop-oriented. —Lizzie Manno

Zoon, the project of Canadian and First Nations musician Daniel Monkman, has shared his debut album, Bleached Wavves, via Paper Bag Records. The Hamilton-based singer/songwriter took his name from the Ojibway word Zoongide’ewin, which translates to “bravery, courage, the Bear Spirit.” Paste recently featured Zoon in our list of Best Acts We Saw at New Colossus Festival 2020. “Help Me Understand,” which premiered at Paste, follows his previous single “Vibrant Colours.” It’s built around hand drums and exquisite, murmuring guitars, which gently swarm and contain this palpable, all-knowing wisdom. Thick, hypnotic shoegaze may be Monkman’s mode of sonic expression, but there’s a deep appreciation for humanity that underpins his music. Monkman turned to music after his struggles with racism, addiction and poverty, and his songs possess compassion and an ache for connection and greater meaning. —Lizzie Manno