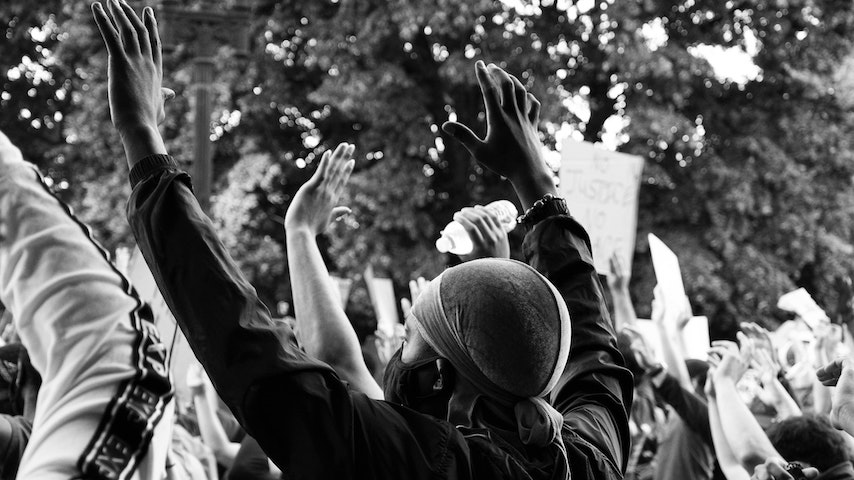 On the day the music industry decided to pause for the well-intentioned yet admittedly confusing #BlackoutTuesday to champion the Black Lives Matter movement, I was supposed to be on my way to London to see my favorite band. I don’t claim favorites loosely. This is the band who made me want to write about music, introduced me to lifelong friends and whose lyrics are scribbled haphazardly across my ribcage. Because, yes, I am a rock journalist, but first and foremost, I am a rock music fan.

So, when The Killers didn’t take part in the (again) admittedly convoluted and in some instances performative act of posting a black square to their Instagram that day, my stomach dropped.

If I’m dancing to vinyl at an arguably inappropriate volume in the safety of my apartment, it really doesn’t matter if that artist is using their social media platform or voice to make it clear that my life matters. However, this isn’t really about social media—it’s about community and spaces. The real issue is that if an artist’s default attempt to not offend anyone includes not offending fans with racist viewpoints, what kind of space are they creating? If that space includes sweaty rooms filled with the sound of guitar solos—spaces I equate to the sacred holiness of a temple—how am I safe there? If you make space for racism, how can there also be space for me?

Photojournalist Ken Grand-Pierre, who has traveled the world interviewing and photographing bands of the rock persuasion, had a similar experience that famed Tuesday.

“I remember my initial take on it when I woke up in the morning,” he says. “I saw it was like, ‘Jesus, look how performative this is, this is annoying, everyone needs to stop.’”

Blame it on the spatial awareness of being Black music people navigating the predominantly white space of rock music, but, as the day went on, we both stopped noticing who was posting and paid attention to who wasn’t.

“I remember I started going on the Instagram and Twitter pages of my favorite acts, one of them being the Arctic Monkeys, and they put a black box up and some texts like “Black Lives Matter,” and they’re not on campaign right now. Their campaign ended two years ago, and they’re completely not doing anything. They don’t even use social media, but they still took the time to be like, ‘Yeah, we stand.’ It’s definitely important for acts like this to show that Black people can feel comfortable in these spaces that they’ve cultivated because, unfortunately, there aren’t many spaces Black people can feel comfortable in.”

Through the lens of social media, I’ve watched Malvina Rincón, who identifies as Latina and Hispanic, experience her favorite rock bands live all over the world. However, a few weeks ago, my gaze moved to something else she was doing online: actively calling out her favorite artists for their silence during the peak of riots and protests in reaction to the murders of George Floyd, Ahmaud Arbery, Breonna Taylor and so many others. Even though she received an insurmountable amount of backlash, as someone who was reluctant to speak up, it made me feel like I could speak up, too.

“In an ideal world, people of color wouldn’t have to tell artists and bands that we exist, but the way some artists responded, or didn’t, makes me feel that the music community may be oblivious to its audience,” she says. “Genres are blending so much nowadays that it seems naive to think that only one kind of person listens to only one particular genre of music. There are so many purists in music communities that it seems near impossible to get everybody together for one common goal. Yet, it’s crazy to think that we can go the route of Live Aid for social justice. I would like to see artists, from every genre and every country, get together and say ‘This is our cause too.’”

However, unlike a global music moment that mobilized the masses to raise millions of dollars with help from Freddie Mercury in a white tank and bedazzled armband, the Blackout Tuesday event was at worst apathetic and at best ambiguous.

“Not knowing where some of my favorite artists stood with Black Lives Matter made me feel extremely uncomfortable, and as ridiculous as it may sound to some, it made me angry,” Rincón remembered. “Was I just a token person of color in their mostly white fanbase? It made me question why I even followed some of these artists in the first place if they couldn’t even acknowledge that Black Lives Matter. On the other hand, I did feel proud of the fans that rallied like-minded individuals into taking action, sharing information, creating fundraisers, and supporting each other, regardless of whether or not their favorite band supported BLM or not.”

”It made me question why I even followed some of these artists in the first place if they couldn’t even acknowledge that Black Lives Matter.”

Jay Flores, who is Latinx and half indigenous, was one of the music fans who took matters into their own hands, working within their favorite band’s community to raise awareness around the Black Lives Matter movement. They were already working on a crowd-created fanzine around the time of Blackout Tuesday and decided to use that platform to speak out against racial disparity and police brutality, as well as raise funds for the Loveland Foundation, an organization that provides access to therapy for Black women and girls. However, Flores says that after speaking out on behalf of BLM following George Floyd’s murder that Black, brown, and Asian fans in this private fan Facebook group were told they were being “racist” against the band in question—made up of four cisgender, white heterosexual men.

“Any person of color’s attempt at genuine conversation, regardless of any justified anger or frustration, [was] immediately shut down by the white majority in the fandom and [was] labeled harassment toward the band with the person themselves being labeled a bully,” Flores says. “We were originally welcome in these fan spaces, but the second we began speaking out against the band’s less-than-bare-minimum response, we were now the villains, our opinions dismissed, and our voices silenced. And I mean that literally. We were kicked out of the Facebook group before any conversation about the band’s response could even begin. We were subsequently talked about negatively in those spaces and were no longer allowed in.”

Despite the lackluster response and outright rejection from some of their fellow fans, Flores and other vocal members in this band’s community still hope that people will put their differences aside and come together to push for real change.

“There comes good with the bad,” Flores adds. “The unity found in the white allies we do have as well as other Black and brown fans that I otherwise would have never known of, is something incredible. And that’s just within the community across different social media. The zine itself has brought together many fans of different races and backgrounds all rallying together for the same cause. That’s magic I don’t think can be contested.”

I considered ending this story without any real resolution or call to action, because it’s difficult to tell whether there’s a single right way to use one’s platform. But, in this case, there is. Bands and artists should say something, and not just ambiguously, but in a direct and clear way, not by “[dodging] the words ‘Black lives matter’ like they were lava,” as Flores put it, but with their whole chest. As Flores also shared, “To step back is a privilege. To decide that you need a break is a privilege. To choose to remain silent is a privilege none of us have, Black people especially in the current societal conditions.”

The prospect of getting it wrong is uncomfortable. As Grand-Pierre reminded me, it’s hard to know what people should say when, “You have a voice, but you’re not the one that’s meant to be speaking.” But getting it wrong is so much more powerful than not getting it at all. That apathy may protect a band’s follower count or bank account or whatever the fuck they gain by not saying “Black Lives Matter,” but people are literally dying in the street. Having an influential platform is surely daunting, but with great power (and unparalleled discographies) comes great responsibility.

Author Elaine Welteroth wrote, “When you exist in spaces that weren’t built for you, sometimes just being you is the revolution.” So maybe the battlegrounds of our current revolution are social media platforms or private groups or hopefully someday soon the sticky floors of concert venues. It’s disappointing that some fans’ and bands’ reactions during the most recent Black Lives Matter movement go completely against what I’ve experienced in person. I have attended countless rock concerts, and I have never felt like an “other.” With the lights out and the music on, I’ve always felt the exact opposite: a sort of deep, engulfing oneness with everyone in the room, a joint understanding that our differences don’t really account for much—at least for an hour or two.

That feeling of togetherness is the dragon I chase with every gig, interview and article, even this one. Towards the end of our chat about being Black in white spaces, Grand-Pierre shared, “It’s something I really struggle with. The idea that people on social media only see Black people fighting for their lives. It makes me sad because I feel like it feeds into having a very myopic view of us as Black people, where there’s so much joy and so much laughter and happiness. It’s been nice to see as time has gone on that there’s been more celebration of Black lives instead of, you know, focusing on the struggle aspect.”

That’s one reason we should hold these spaces accountable, to protect the innate joy, laughter and happiness we find through music. Really, I’m just asking to feel comfortable in the spaces I choose to celebrate in.

So no, I won’t throw out my records, concert tickets or memories, nor will I “renounce my fandom” as one anti-Black Lives Matter fan literally asked someone to do on my timeline a few weeks ago. There’s as much space in the human experience for fucking up as there is (or should be) for redemption. I’m still optimistic that if we all have music in common, if we can all sing the same words together in the same rooms and be in love with the same songs, then maybe we can all make the world a better place together, too. I know it sounds utopian, but it’s what I believe, because as Rincón shared while reflecting on the dire state of things: “The cliche is that “music is universal,” and I sure would like it to live up to that.”

New York based journalist Erica Campbell is a host and post-punk revival rock devotee with stories in Playboy, Nylon, and Huffington Post. She’s the former music editor of Consequence of Sound and owns a star ornamented boot collection that would make David Bowie proud. You can confront her about her boot hoarding habit on Twitter and check out her latest stories and interviews at campbellerica.com.