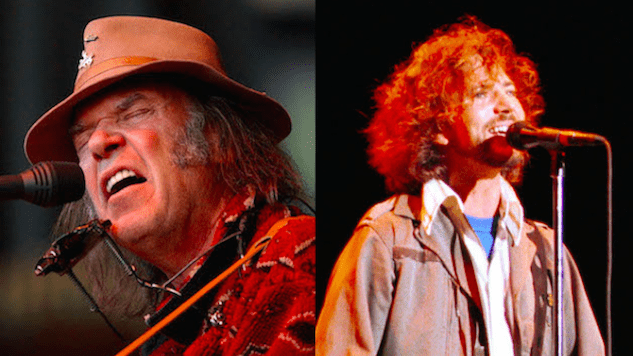 Neil Young, one of the greatest songwriters of all time, teamed up with Pearl Jam, one of the biggest bands of the ’90s, for a performance on this day in 1995.

Pearl Jam and Neil Young performed together at San Francisco’s Golden Gate Park, and the show was definitely rough, to say the least. Pearl Jam frontman Eddie Vedder fell ill and left the stage after seven songs. Pearl Jam hadn’t been touring due to legal trouble, so the show was meant to be a huge event. The sold-out crowd of 50,000 was disappointed, but Young, a friend of the band, tried to rescue the show.

After an appearance together at the 1993 MTV Video Music Awards, the two acts met up again for a collaboration on Neil Young’s 1995 album Mirror Ball.

Watch Pearl Jam perform “Not For You” before Vedder left the stage, and watch Neil Young try to keep the crowd’s spirits up with “My My, Hey Hey (Out of the Blues).”