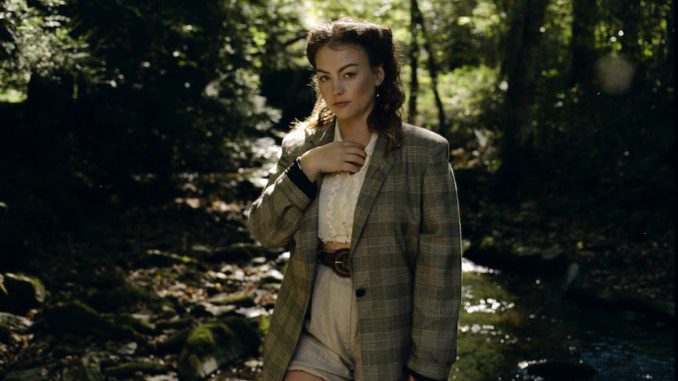 Angel Olsen has shared the video for the title track from her forthcoming album Big Time, coming June 3 on Jagjaguwar. The LP is Olsen’s first since 2020’s Whole New Mess, which reimagined tracks from her 2019’s acclaimed All Mirrors.

“Big Time” finds Olsen committing to the full-on country sound that has long lingered at the edges of her songs, with organ, pedal steel, honky-tonk piano and snare rim clicks ambling alongside her typically pretty vocals. The track places Olsen’s affectionate narrator in an idyllic, pastoral setting, a rural oasis where there’s not much to do but love: “We’re always busy, baby, not this time / Lay in the tall grass talkin’ with your eyes.” Only in the outro, as Olsen repeats, “I’m loving you big time,” does she let you feel the ache of a heart so full.

Stuckwisch says of the video in a director’s statement:

For “Big Time,” we set out to celebrate how humans identify and to subvert the old-fashioned gender binary and societal/internalized gender roles of the past through choreography, color, and wardrobe. To exist outside strict definitions is powerful and often not given a place in cinema. This was our chance to hold a positive reflection in the space and to shout to the world that you are more than who you are told to be.

“Big Time” is what happens when we do not express our true identity but find freedom when we step out of the shadows into our most authentic selves. In the first rotation, the lighting is drab, the clothes are monochromatic, the dance is monotonous … gender-conforming roles present. However, with each rotation, something magical happens, both our cast and Angel begin to come alive, to feel free. We see the clothes brighten, the dance heightens, and the bar that was once devoid of emotion can barely contain the joy bursting out of each individual.

I am proud to say that over 80% of our cast and 50% of our crew identified as nonbinary and non-gender conforming.

Olsen embarks on the Wild Hearts Tour alongside Sharon Van Etten, Julien Baker and Spencer. in late July, then tours the E.U. in the fall.

Watch Olsen’s “Big Time” video and revisit “All the Good Times” below, and find her tour dates further down.