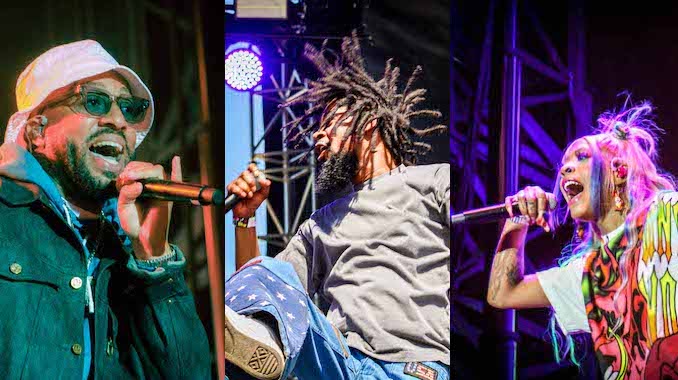 Nestled in the cozy daze of San Bernardino, California was The Smoker’s Club Festival, bringing the heat in more ways than one. Thousands flocked to the Glen Helen Amphitheater to turn up the weekend after Coachella for even more festival shenanigans. In a packed one-day affair, cult favorite rappers performed alongside seasoned veterans and newcomers. Below, check out some of our favorite shots and read more about our favorite sets from The Smoker’s Club Fest.

Hot off the trails of their excellent triple album, which included Paste favorite BEFORE SHIT GOT WEIRD, The Cool Kids took on an early slot to perform some gems from their lengthy career. Chuck Inglish and Sir Michael Rocks were clearly unfazed by the creeping heat, bringing an energetic performance cut short only by a revolving stage.

New York underground mainstays The Underachievers are almost a decade on since their acclaimed mixtape Indigoism, and their performance on the Smoker’s Club stage proves they’ve only gotten better with age. Their biting Brooklyn edge put the wheels in motion for what would become a New York blog rap reunion on the same stage throughout the day.

It has to be said that Zack Fox has one of the most interesting career paths of any public figure, going from Awful Records graphic designer to one of the most prolific comedians that stumbled into hip-hop. Nonsensical jokes aside, Fox’s music is ignorant in the best way, taking upon Southern hip-hop influences for hooky earworms that need a few listens to fully unpack the layers of humor and homage inside each song.

Schoolboy Q intended to perform the entirety of 2014’s Oxymoron, but time constraints forced him to get creative. The intense set began with “Gangsta,” the vicious opening track from the album. Q chose not to go in order, nor did he have any special guests despite various collaborators performing the same day. Regardless, it was a set to remember as Q beamed with pride nearly a decade on from one of the best rap albums of the 2010s.

Detroit’s own Zelooperz has taken on the festival stage before in support of Danny Brown, but 2022 is his year to step forth solo. Following a co-headlining tour with Zack Fox and his first solo tour in the United States, his first solo festival performance was the next logical step. His intense energy drew a large crowd eager to witness his high-octane stage presence, cheered on by a small posse that included Brown and Fox. As Zelooperz steps into a new stage in his career, his friends remain close behind with love in their hearts.

The Smoker’s Club stage might as well have been a Beast Coast reunion (featuring Pro Era, Flatbush Zombies and The Underachievers) as Joey Bada$$ was the final piece of the puzzle for the raucous night. Aided by powerhouse DJ and producer Powers Pleasant, Bada$$ plowed through his extensive catalog carried with his magnetic charisma. In one of the most special parts of the night, he paid homage to Beast Coast co-founder Capital STEEZ to close out a momentous occasion.

Girls to the front when Rico Nasty takes the stage! One of Paste’s favorite punk rappers came through with a performance for the ages. The audience held onto every word of hyperpop-infused “IPHONE” and raged to the aptly titled “Smack a Bitch.” Nasty was also assisted onstage by Bktherula for their recent collaboration “Vaderz” and performed “Fallin’ Off,” her joint with Memphis rapper Duke Deuce.

In the same trend of everyone else approaching a decade since their landmark projects, few of them have the staying power of Ferg’s Trap Lord (you still cannot go to a single hip-hop show or party without someone playing “Work REMIX”). Whether Ferg was tackling the grimy trap raps of his stunning debut or the triumphant swagger of Always Strive and Prosper, his infectious energy and ear for the experimental takes a new life onstage.

Jade Gomez is Paste’s assistant music editor, dog mom, Southern rap aficionado and compound sentence enthusiast. She has no impulse control and will buy vinyl that she’s too afraid to play or stickers she will never stick. You can follow her on Twitter.