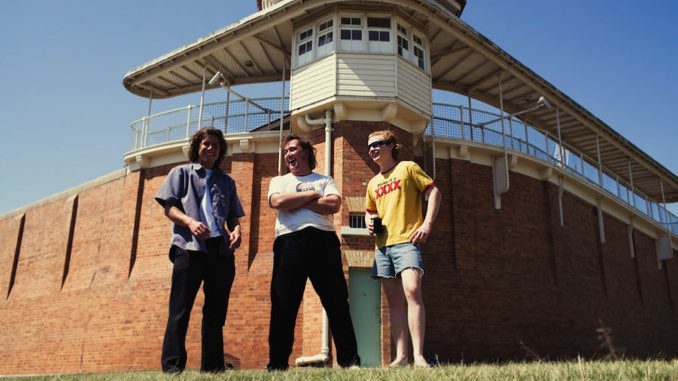 The Chats are coming out swinging on their second album: GET FUCKED, coming Aug. 19 on the band’s own Bargain Bin Records, follows the Australian pub-punk trio’s pre-Covid 2020 debut High Risk Behaviour, and its announcement is accompanied by the video for their latest single, album opener “6L GTR.”

Our second preview of the band’s sophomore album after March’s “Struck by Lightning,” “6L GTR” is as rip-roaring as the sports car it shares a name with. New member Josh Hardy (who replaced founding guitarist Josh Price in late 2020) floors it via hard-charging power chords (and, later, an incendiary solo), backed by Matt Boggis’ twitchy drums. Meanwhile, vocalist and bassist Eamon Sandwith assumes the perspective of a joyrider whose car is their entire personality: “Don’t need a big flash, fancy car / Just need a six-liter GTR,” he snarls repeatedly, until The Chats skid to a stop.

“6L GTR” was inspired by Sandwith seeing its title on a license plate in an airport parking garage: “I don’t even know if the car itself was actually a six-liter GTR or anything,” he says in a statement. “To be honest with you, I don’t even know what a car like that would look like! I can’t drive! That was the thing, we were just trying to get into this dude’s head.”

The track’s video was made by animator and illustrator Marco Imov, who recalls, “They hinted that it would be cool if instead of being directly about the car, it should be about the band wanting the car. From there it kind of wrote itself down.”

The Chats are currently on a North American tour, with a show in Boston tonight (May 5), followed by stops in Brooklyn, Philadelphia, Toronto, Chicago, Denver, Seattle and Portland. They’ll head to the E.U. in late June and into early July.

Check out the “6L GTR” video and the details of GET FUCKED below, along with the band’s tour dates.