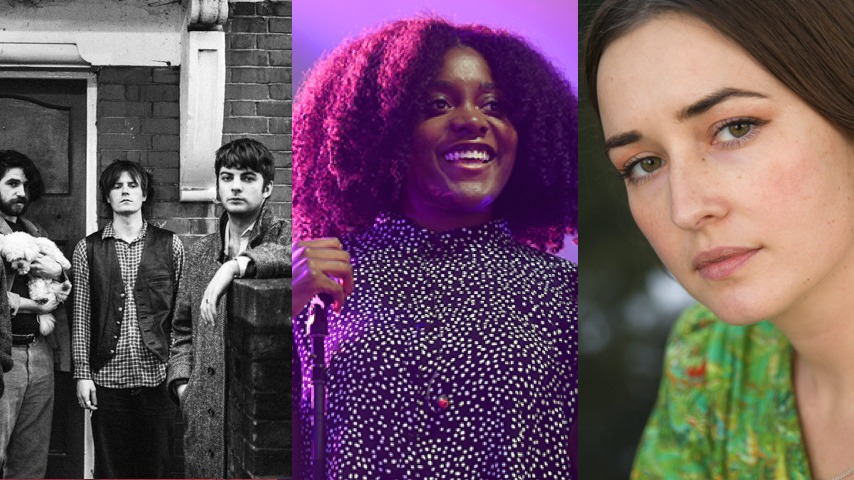 If you think about the year as a whole, you may imagine 2020’s soundtrack as sounding bleak. But, in reality, it’s full of grit and hope. June is the perfect example. While protest songs like those from Sault, Noname, Leon Bridges, Terrace Martin and Run The Jewels reigned supreme, we were also treated to songs of pure beauty. And lest forget the songs that fall somewhere in between, like the jubilance of Bad Moves’ catchy anti-capitalist fight song “Working For Free.” June really sounded great, when you get right down to it. We had our ears to the ground, sky and the space in the middle, and this is what we came up with. Enjoy the best songs of the last 30 days.

Listen to our Best Songs of June 2020 playlist on Spotify right here.

Washington D.C.’s punks Bad Moves released the single “Working For Free” ahead of their sophomore record Untenable, which released digitally last Friday, June 26, and will be out physically on Giovanni Records July 3. The track fits in well with today’s anti-capitalist post-punk scene, reminiscent of current bands like Parquet Courts or Bodega. “Though the song was written before the pandemic, the precarity described is now more glaring than ever,” the band said in a statement. “The service workers whose industries have shut down are also the people expected to bear the brunt of exposure risk as economies reopen.” —Danielle Chelosky

The Dixie Chicks (now “The Chicks”) marked their name-change occasion with the release of a new single, “March March,” the third in preparation for their forthcoming album Gaslighter, which they recently announced will arrive July 17. “March March” is a fierce protest song that praises generations of people who have fought for change via protests and organized movements, particularly our “youth” (like gun control activist Emma Gonzalez, who appears in the song’s lyric video). The clip concludes with a flashing list of names of Black people who’ve been killed by the police, including George Floyd, Breonna Taylor and Ahmaud Arbery, as well as a message to “use your voice. use your vote.” and a list of resources in lieu of credits. —Ellen Johnson

If I were you, I’d start placing bets on Hum’s “Waves” as the most satisfying use of overdriven guitars on any track from 2020. You can hear the windy central guitar line try to outdo itself in real time as their pedal fiddling reaches life-affirming heights. Its mythical scale is only enhanced by lines of an apocalypse—but a calming and poetic one at that: “And the traces of morning will lead us to the end / Where the dying landscape meets the water / And the waves of you roll over me again.” —Lizzie Manno

Only a month after releasing her critically acclaimed album, Sorceress, Jess Williamson has shared a new single, “Pictures of Flowers (Feat. Hand Habits),” as a part of Mexican Summer’s Looking Glass series. Written during quarantine and featuring Meg Duffy on guitar and Jarvis Taveniere on mellotron, bass and percussion, the track was stitched together from separate recordings made in each musician’s home studio. “‘Pictures of Flowers’ is a song that speaks to the fear and uncertainty I felt in the early days of the Quarantine, as well as the clarity gained and realignment in priorities I’ve been experiencing over the last few months,” Williamson said of the song. —Lia Pikus

8. John Prine: “I Remember Everything”

Earlier this year, beloved folk legend John Prine passed away after contracting COVID-19. A livestream tribute was held for him later on, with appearances from many famous celebrities, and his estate shared his final song “I Remember Everything.” The nostalgic ballad was produced by Dave Cobb and co-written by Prine and his longtime collaborator Pat McLaughlin. Its lyrics are as beautiful as any John Prine song: “I remember everything / Things I can’t forget / The way you turned and smiled on me / On the night that we first met.” Break out the tissue box, and watch Prine performing “I Remember Everything” in a living room below. —Danielle Chelosky

A softly-sung rumination on systemic and systematic racism in America, “Sweeter” opens with a sharp driving beat, Bridges’ vocals taking over the texture of the song after a few measures. “Why do I fear with skin dark as night?/ Can’t feel peace with those judging eyes,” Bridges sings. “Hoping for a life more sweeter/ Instead I’m just a story repeating.” “Growing up in Texas I have personally experienced racism, my friends have experienced racism” Bridges says. “From adolescence we are taught how to conduct ourselves when we encounter police to avoid the consequences of being racially profiled. I have been numb for too long, calloused when it came to the issues of police brutality. The death of George Floyd was the straw that broke the camel’s back for me.” —Lia Pikus

In just over a minute, Chicago rapper Noname says more about the ongoing Black Lives Matter protests than an entire album could in lesser hands. “He really ’bout to write about me while the world is in smokes?” she sings calmly, clearly addressing J. Cole and the song he released earlier this month which seemingly took aim at Noname. After speculation that Cole was calling out Noname became rampant on social media, he tweeted, “She has done and is doing the reading and the listening and the learning on the path that she truly believes is the correct one for our people. We may not agree with each other but we gotta be gentle with each other.” He says they need to be gentle with each other, but Noname says something else better, and with more efficiency, truth and bite: “I guess the ego hurt now / It’s time to go to work, wow, look at him go / He really ‘bout to write about me when the world is in smokes? / When it’s people in trees? / When George was beggin’ for his mother, saying he couldn’t breathe / You thought to write about me?” Oh, also, the song was produced by Madlib. There’s so much power here. —Ellen Johnson

Bridgers has a way of making mundane, depressing scenes feel profound. Folk, blues, rap and country artists are all particularly good at this as well, but what separates Bridgers from the pack is her uniquely poignant vocals that make images of “rusty swing sets” or “outlet malls” hit especially close to home. Lines like “There’s no place like my room” and “Not even the burnouts are out here anymore” really pierce the heart with its rundown, small town woes on Punisher’s final track, “I Know the End.” The song’s dramatic horn crescendo rivals Bridgers’ vigorous rock outro on BOCC’s “Big Black Heart,” but it’s much more grand and drawn-out. Though in some respects, the chorus vocals that proclaim “The end is here” are a bit cheesy, the meeting of piano, horns and ripping guitar that follows is immensely glorious—and that’s not even the best part. Whoever is delivering blood-curdling screams (presumably Bridgers, but it could be an array of voices), which turn into exhausted, creepy exhales at the tail end of the track, should be given a medal. —Lizzie Manno

“And you so numb you watch the cops choke out a man like me / And ‘til my voice goes from a shriek to whisper, ‘I can’t breathe’ / And you sit there in the house on couch and watch it on TV / The most you give’s a Twitter rant and call it a tragedy” This is the line that shook people the most. El-P wrote on Twitter that the “I can’t breathe” line was a nod to Eric Garner, who was killed by an illegal police chokehold in 2014, but we now know that the phrase was also uttered by George Floyd before he was recently killed by cops. History repeats itself in cruel ways, and this instance is really difficult to swallow. Unlike past incidents, Floyd’s killing has resulted in sustained nationwide and global protests, so perhaps the cycle of mourning, outrage and political inaction that Killer Mike refers to here will finally be broken. —Lizzie Manno

Up-and-coming artist Samia has announced her debut album, The Baby, and has released a new single, “Fit N Full,” with an accompanying music video directed by Martin MacPherson. The single is an indie rock splash of sunshine with Samia’s dazzling vocals accentuating the track’s lush instrumentation. A summer anthem that tackles the issue of body image, “Fit N Full” is one of Samia’s most upbeat releases to date. —Lia Pikus

“The revolution has come (out the lies!) / Still won’t put down the gun.” This is the first line of Sault’s new album Untitled (Black Is). It’s time to amend your album-of-the-year lists, because the album of the Movement has arrived—and every second of it is glorious. The languid synthesizers on “Eternal Life,” the fury-filled shared vocals on “Stop Dem,” the jazzy guitars on “This Generation” and the skittering beats on “Black” make up a rich tapestry of soul, funk and gospel music. While there are nods to Motown, these aren’t your parents’ classic soul records—you’re hearing the eccentricities, voices and personalities of today and tomorrow. —Lizzie Manno

Philadelphia indie rock artist Shamir has announced plans for an album and has shared a self-directed music video for his track “On My Own.” The single, premiered on Rolling Stone at the beginning of Pride Month, will be included on his currently unnamed forthcoming album, out this fall. Originally written about a breakup, “On My Own” also doubles perfectly as a quarantine anthem, celebrating the independence and freedom that can come with living alone. “On My Own” follows the release of Cataclysm, a surprise album that dropped in March. —Lia Pikus

Listen to our Best Songs of June 2020 playlist on Spotify right here.