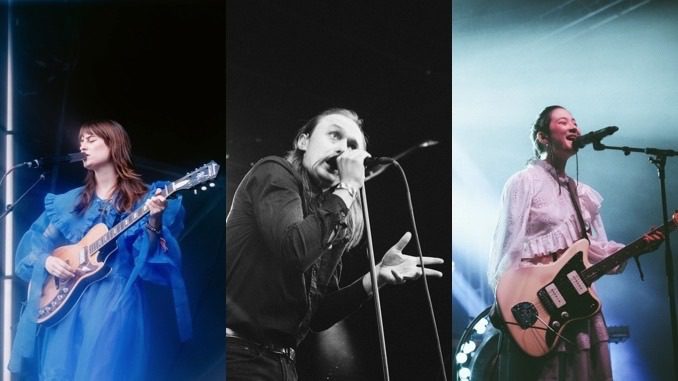 Atlanta’s Shaky Knees music festival resumed operations during its regularly scheduled spring weekend this year (April 29-May 1) after the fest got bumped to October last year thanks to COVID, and the Paste team was on the ground again to experience all it had to offer. It once again feels extra exciting to be back at the festival after missing so much live music during the lockdown era. The artists and attendees alike just seemed happy to be out and about experiencing the festivities again. From rising stars to established acts to a few of Atlanta’s own exports, Shaky Knees once again delivered on the promise of bringing the best in indie rock to Central Park. Here are our favorite sets from Shaky 2022.

Band of Horses returned to Shaky Knees this year in full force. They played the inaugural Shaky Knees festival in 2013, and they acknowledged this weekend how special it is to play Shaky Knees any time they’re able. While a lot has changed in the almost-decade since they first played this festival, some of their older songs like “Funeral” and “No One’s Gonna Love You” sound fresh as ever. They added a few songs from their 2022 album Things Are Great into the mix (like “Lights” and “Crutch”), which sounded just as flawless as the songs they’ve been playing for years. Some of the band members, including frontman Ben Bridwell, were even sporting Braves gear. —Ellen Johnson

Fellow Atlanta native Emily Kempf rocked our socks off Saturday with her band Dehd, who hail from Chicago. Their cool, carefree style of indie rock shone in an outdoor live setting, as did some of their grooviest earworms, including “Loner,” “Bad Love” and “Lucky.” Kempf’s booming voice stretched far across the dusty Central Park lawn, and Jason Balla’s squirming guitar along with Eric McGrady’s assured drumming kept us dancing the whole 45 minutes. —Ellen Johnson

It’s always special to see an artist in their hometown, but it’s even more fun to see Faye Webster in Atlanta. The 24-year-old singer calls the city home, and she even gave a Shaky shoutout to her parents, who were in attendance at her Friday afternoon set on the Piedmont stage. Webster treated the crowd to songs from her 2019 album Atlanta Millionaires Club as well as her latest LP, I Know I’m Funny Haha, including “A Dream With a Baseball Player,” her love song to Braves star Ronald Acuña Jr.—so there’s no question about where her sports team allegiance lies. —Ellen Johnson

With faces smeared in hasty Pierrot makeup, siblings Wyatt and Fletcher Shears of The Garden made an avant-punk circus of the Piedmont stage. From the moment of the first drum beat, an endless stream of crowd surfers began hurtling overhead. The people in front of me were a blur of neon hair. A jester hat bobbed by, then a spiked mohawk teased with enough gel to seal a tomb. Pit security had their work cut out for them, but The Garden never seemed overwhelmed. They were the ringleaders of a wholesome chaos, even throwing in a few dives and somersaults of their own. The entire set was an energizing treat, but it was “Sneaky Devil” (a twangy sludge of bass and glitch a la Death Grips) that invited a mosh so memorably fun, I bookmarked it as one of my favorite festival performances yet. —Lindsay Thomaston

Becca Harvey’s brand is that of no-frills enchantment. Performing under the moniker girlpuppy, Harvey conducts breezy indie-pop with a subtle charm that has earned her many a likening to artists like Phoebe Bridgers and Alvvays frontwoman Molly Rankin. While these comparisons are not improperly placed, it would be wrong to say that Harvey isn’t carving out a name of her own. She embraces earnestly the restless melancholies of youth, often lamenting her growing pains to deceptively optimistic cadences. Portraits of heartbreak are sandwiched between references to astrology and QAnon in a way that succinctly ensnares the dreamy bittersweetness of one’s early 20s, particularly Gen Z’s foray into young adulthood. As an Atlanta native, there was no shortage of support in the crowd for Harvey’s Sunday set. The legion of positive murmurings overheard as I meandered throughout the audience proved that the heartfelt wisdoms of girlpuppy had earned her a welcomed throng of new support. —Lindsay Thomaston

Japanese Breakfast have always been a stellar live act, but the band has an extra wow factor after releasing Jubilee last year. Lead singer and songwriter Michelle Zauner commanded the stage with her clear, expanding voice—and a gong, which comes into play during a few songs, but most notably during “Paprika,” which kicked off the sub-headliner set Saturday evening on the Ponce De Leon stage. The terrific light show, combined with expert musicianship from everyone (especially the saxophonist and violinist) and Zauner’s beautiful vocal delivery, made it the most vibrant and joyful set of the whole festival. —Ellen Johnson

Whether you realize it or not, you know who Molchat Doma are. Through the fervid osmosis of a viral TikTok sound, the Belarusian dark-wave trio found eager ears in a new American fandom born too late for Joy Division. These fans packed out the wooded grounds of the Criminal Records Stage—the most crowded set I’ve ever witnessed at this particular stage—in tangible anticipation. If it weren’t for the disorganized sea of restless festival-goers, you might have mistaken the crowd for the queue of an exclusive Berlin nightclub; black was the uniform color of choice. Strappy harnesses draped from leather-accented shoulders. I think I got a contact high from the low-hanging smog of weed smoke. When Molchat Doma took the stage, the trance really began. Frontman Egor Shkutko quickly captivated, largely reserved in his movement at the mic, but no less emotive for it. Though the band’s discography is largely minimalist in instrumentation, it’s the flourishes of synth from members Roman Komogortsev and Pavel Kozlov (who rotate on the keys) that truly expand the brutalist backdrop of post-punk hooks into something irresistibly dance-y. —Lindsay Thomaston

Though their set was part of the festival programming, My Morning Jacket’s Sunday night finale may as well have been a standalone show. The band played for what felt like six hours in the best way. The Kentucky-bred rockers have a crossover jam following, and it’s easy to see why. They played some songs for upwards of 10 minutes, closing with the crown jewel of their jams, “Touch Me I’m Going to Scream Pt. 2.” There’s an added layer of meaning to seeing My Morning Jacket at Shaky, as they have headlined the festival before. Jim James is an all-timer frontman, and My Morning Jacket are the perfect group to close out a festival like Shaky Knees. —Ellen Johnson

While punk aesthetics are enjoying a present mainstream renaissance, for many, this period will come and pass as nothing more than a consumerist trend meant for selling fingerless gloves and wince-worthy singles tepidly attempting to capture the nostalgia of falling in love with an emo girl. For The Regrettes, it’s just another day, though the rock revival has provided the perfect timing to prove just how long they’ve been perfecting their chops. With a sound that pulls influence from riot grrrl, surf rock, doo-wop and garage punk, The Regrettes provided a musical space that’s as appropriate for opening a pit as it is for swaying hips, which is exactly what happened during their late-afternoon performance at Shaky Knees. Frontwoman Lydia Night pranced across speakers and twirled into high kicks as fans crammed against the barrier to sing the lyrics back to her, the neon pink of her microphone cord flying behind like a feather boa. At one point, perhaps in a nod to the aforementioned renaissance, the band launched into one of the best covers of the weekend with their rendition of Avril Lavigne’s “Girlfriend.” It was impossible not to smile as Night confidently led onlookers in a pop-punk singalong, but it was the genuine joy both onstage and in the crowd as fists pumped in the air to the hook of their 2016 single “Seashore” that solidified the band as more rock and roll than much of the festival’s headlining acts: “I’m like nobody else, so you can just go fuck yourself.” —Lindsay Thomaston

This will come as no surprise to those who have seen Spoon before, but the Austin, Texas, natives put on a spectacular festival set. Britt Daniel is an energetic frontman, and even though an hour doesn’t feel like long enough, he and the rest of the band made the relatively brief set feel like a full-on arena rock show. They of course made time for hits “Inside Out” and “Do You,” and a few cuts from their 2022 album Lucifer on the Sofa (“Wild,” “The Hardest Cut” and “My Babe” among them) fit right in alongside the old favorites on their setlist. —Ellen Johnson