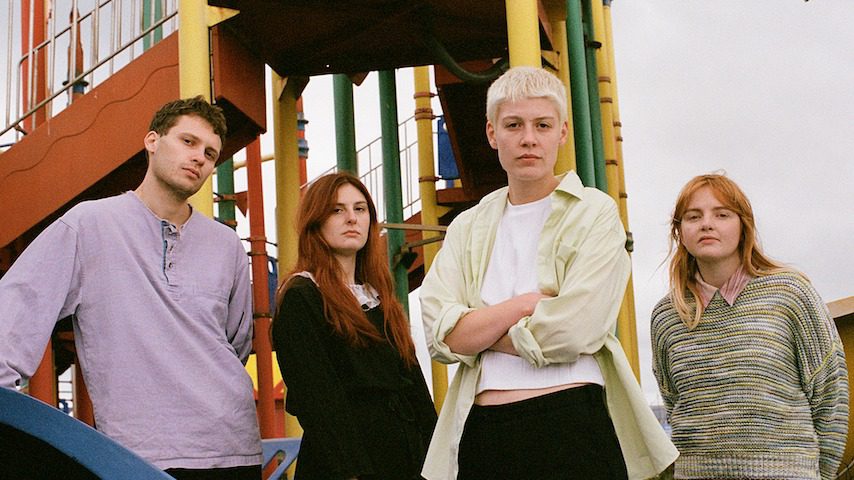 U.K. band Porridge Radio have already shared two excellent singles off their forthcoming album Waterslide, Diving Board, Ladder to the Sky (out May 20 via Secretly Canadian), “Back to the Radio” and “The Rip.” Today, they’ve shared a third single, “End Of Last Year,” along with an animated video for the track created by Maura Sappilo.

Porridge Radio frontperson Dana Margolin’s considered, heart-on-sleeve lyricism steers “End Of Last Year” as she talks herself through what seems like the slow, painful collapse of a relationship she holds dear. “What you take from me / I don’t ever want it back / I don’t want to go back,” she chants over the rising crash of cymbals and the warm melancholy of horns that replace the chiming keyboards that rang out over the song’s intro, signaling that the situation will cave in on itself sooner rather than later. Though it feels and sounds gentler than the other two singles, letting itself gently unfurl rather than storming in and demanding what it’s owed, it features some of the most devastating imagery we’ve ever heard from the band: “Cut off my shoes instead of taking them off / Cut off my hands because they’re itching so much / Talk to myself because it?s getting so bad / Do you know? / You break everything you touch.”Even when they attempt to be delicate, there’s a defiance to everything Porridge Radio create, taking what could’ve been a whisper of a song in different hands and blowing it up to an eruption that could shake the ground with how much they mean it.

In a press statement, Margolin talked about the inspiration behind “End Of Last Year” and the process of making the animated video for the track:

End Of Last Year is a love song for my bandmates and for myself. It?s about not trusting my intuition, not trusting my body to heal itself, not trusting the people closest to me, but it is also an ode to all those people, and to difficult platonic love. It came out of a particularly painful period of communication breakdown and high pressure that hurt a lot, but ended in reconciliation and understanding.

The video is by my friend Maura Sappilo. I’ve been a fan of her work for a long time, and I wanted her to make the video for this song because whilst her work is playful and bright, she knows how to bring the dirty and painful and disgusting aspects of being a person and having relationships into her paintings. Her art is lyrical and sensual and painful and beautiful, and I love how she brought all that to this song.

Porridge Radio will be playing a free, sold out show at New York’s The Greene Space tonight (May 3), but it won’t be the last the U.S. will see of the band this year. Along with the single’s release, Porridge Radio have also announced their first ever North American tour, which will kick off in San Diego, CA on September 6 and wrap up in Austin, TX on October 1. The shows will arrive between U.K./E.U. tours the band have planned for both the summer and winter, the first show of which will take place in Manchester on May 20.

Check out the video for “End Of Last Year” below, and keep scrolling for a full list of Porridge Radio’s tour dates. You can preorder Waterslide, Diving Board, Ladder to the Sky here.