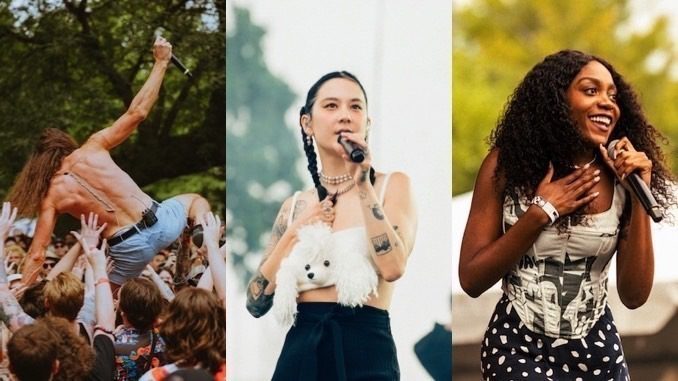 Muggy heat and a nearly rained-out start couldn’t slow down the Pitchfork Music Festival’s 2022 edition. With headliners including The Roots, The National and Mitski, this year in Chicago’s sludgy Union Park featured all the COVID-19 cancellations and surprise appearances from Chicago scene mainstays (hi, Jeff Tweedy!) that you’d expect from the eclectic, indie-focused fest. Paste went all weekend long, taking in the sights, smells, and corn dogs—not to mention the sounds, ranging from accomplished legends to up-and-coming acts. Here are the 10 best sets we saw at Pitchfork Music Festival 2022.

Even discounting the multiple ripped vocalists, blindfolded bassist and trio of Juggalo wrestler women, The Armed were truly unlike anything else at the festival. As the heaviest act of the weekend by far, the enigmatic hardcore Detroit band christened the first Saturday set at the smaller Blue Stage with captivating ferocity beyond compare, never relenting once their pummeling riffs and visceral screams took hold. Though The Armed have primarily been talked about for their antics in relative anonymity, with an unfathomably large rotating roster of band members, their presence onstage spoke to the idiosyncratic appeal of the band entirely on its own, even to those unfamiliar with their reputation. As band members spent half the set traversing guitar solos and blast beats with carefree ease, with an eagerness to leap into the crowd with wild abandon, it became impossible not to watch The Armed without grinning, headbanging, moshing, or some combination of all three. The more time their vocalists spent crowdsurfing, handing off the microphone to fans on big hooks, or in the heart of a moshpit, the clearer it became that there were few experiences this weekend that would feel more communal than spending 45 minutes with others in the pit as The Armed tore through the afternoon. Beyond all their stunts and mysteries, that’s what the group, in all its mystique, does best: letting the vague definitions of what constitutes its “band” make everyone in their vicinity feel as vital a part as those onstage. —Natalie Marlin

Grungy and hypoed, Indigo De Souza gave one of the better rock performances during a drenched Friday at Pitchfork. Her let-loose howl and dark lyrics were the relatable rallying cry the soggy crowd needed—of course we’re all thinking about death in our rained-through ponchos and muddy shoes. De Souza’s band is certainly something, but little matches her voice—you need the heat to back up some of this melodramatic songwriting, and the strength in her vocals transforms emotionally raw lines into pure passion. Rock-solid and completely assured. —Jacob Oller

This year’s festival unquestionably belonged to Michelle Zauner—her meteoric rise has only grown since the lineup announcement, crowds were camped out for her set all day Saturday, and her fest-exclusive tie-in lager Be Sweet was in the hands of attendees everywhere you turned all weekend. Her set itself only confirmed that this was her moment, making the most of her place later in the evening with a band full of string and brass players, an floral-rimmed gong she excitedly skipped across the stage to bang, and a mid-set surprise appearance by Wilco’s Jeff Tweedy on “Kokomo, IN” and his own “Jesus, Etc.” But what really made this Japanese Breakfast set an instant pantheon classic for the festival’s history was Zauner’s unabashed enthusiasm at performing at this scale, lending cuts from earlier album Soft Sounds from Another Planet and videogame Sable the same passion as the songs she played from her newest record, Jubilee. It was easy to tell how completely Zauner’s charisma took hold of the night just from her ecstatic opening one-two of “Paprika” and “Be Sweet”; by the time she closed the set with her virtuosic guitar solo on “Posing With Cars” into Soft Sounds’ “Diving Woman,” it was clear how much her confidence and skill had captured the hearts of all in attendance. This year’s Japanese Breakfast set felt like the monumental coronation, cementing Zauner’s incredible climb, and her contagious exhilaration in every second extended her joy to everyone witnessing it. —Natalie Marlin

Festgoers who got to Union Park right when the first acts of the day started were frequently rewarded with some of the most compelling, off-the-beaten-path performers of the entire weekend. Experimental multi-instrumentalist Taja Cheek, under the stage name L’Rain, was one of the strongest demonstrations of this, serving as a transitory passage from the chill vibes of the early afternoon to gradually escalating chaos for those entering the festival on Sunday. L’Rain’s live set builds upon the often ephemeral nature of the shortest songs from her latest album, Fatigue, dwelling much longer on songs brief in their studio format, such as vignette “Which Fork,” until they naturally unraveled or collapsed seamlessly into the next piece around the corner. The expertise and interplay of L’Rain’s six-piece band weaving through odd time signatures and polyrhythms was prominent from the very beginning of their set, but never to the detriment of their allure as consummate musicians. Adding to that allure was the set’s variety, from the quiet, clean guitar at the start of “A Toes (Shelf Inside Your Head)” giving way to a growing build and swell of saxophone, to the off-kilter spare hand claps that launch “Kill Self” giving way to jolting screams from Cheek that rattled through the festival grounds. L’Rain’s set wasn’t just unlike anything in its orbit this weekend; it frequently upended itself in ways that only grew more hypnotic the longer it went on. —Natalie Marlin

Looking like they were scraped off the floor of competing ’90s laser tag arenas, the members of Magdalena Bay were full of multicolored energy during their electro-pop album run-through. Singer Mica Tenenbaum particularly stole the show, prancing and kicking for the entire hour—not to mention doling out an entire Party City’s worth of props. When the freaky bunny mask came out, it was like Donnie Darko swapped its depression meds for molly. A spirited performance, even if the sound quality on their stage didn’t quite do the duo’s music justice. —Jacob Oller

With little more than a freestanding door and clockwork choreography, Mitski’s headlining performance held a thrumming Pitchfork crowd rapt. Sounding like the ghost of an arena-pop star and looking like a Met Gala automaton in a one-sleeved dress, the performer jump-kicked and shadowboxed across the stage while her band let her run wild. Her excellent new album Laurel Hell featured heavily into the set, though she played the hits with just as much eccentric verve. Her intense limb movements only enhanced her ethereal charisma, backed by pounding drums and raging guitar. Above it all was her voice, vulnerable yet technically controlled even when she was whipping her hair around like a headbanging banshee. With little stage banter interrupting her highly planned performance, Mitski’s set was potent, dense, energizing and weird—just what those waiting in Union Park’s mud for her needed. —Jacob Oller

Taking over for BADBADNOTGOOD after they had to cancel their appearance, Natural Information Society proved why they’re a Chicago staple. These bold instrumentalists really got up on the big stage and played one continuous jazz-fusion bop. Are you kidding me? What a flex. The midday set was perfectly placed, as the woodwind-heavy rhythms were a chill, yet complex accompaniment to blanket-lounging, corndog-horking and rain-dodging. Then, every once in a while, you’d look up and go “Are they still going?” Nerdy, breathless and totally badass. —Jacob Oller

A non-stop flow and endless lyrical confidence kept Noname at the front of the rap performances at Pitchfork 2022, even if some sound issues kept her quiet until the middle of her set. A funky, talented backing band propped up her dense poetics, and her crowdwork wasn’t just funny, but also often nipped at the sad fact that the summer music fest’s crowd is mostly a white hipster hellscape. Beyond a general lack of rhythm, there was the same kind of audience hesitance that stymied Tierra Whack’s performance on the same stage two days prior. But that didn’t slow Noname down as she blitzed through tracks with onstage guests like her mom and the singer Akenya. A set that blended musicality with activism (as one might expect), the Chicago native’s performance still got plenty of love—especially a crowd-silencing bit of a cappella that electrified the air. —Jacob Oller

I hadn’t heard anything by Sofia Kourtesis before her set on Sunday. By the time her performance ended, I was convinced it was one of the greatest festival sets I had ever seen. Within her first minutes onstage, the Berlin-via-Lima house musician spoke about her difficulties nearly being unable to make the festival entirely before launching into a bass-heavy track that instantly got the crowd moving. The energy never wavered the entire set, whether in Kourtesis’ quick finesse at implementing her sampler and percussion pad on either side of her, or in her impassioned dancing that eclipsed even the most lively moves in the pit. What secured this performance as an all-timer for this festival, however, was the unyielding emotion Kourtesis put into every moment. After dumping an entire bottle of water on her head during an especially dynamic song, she delivered a winningly earnest speech about the power of love while promising to protect everyone in the crowd. When her thanks to the audience toward the end of her time garnered an overwhelming roar of applause, she choked up, holding back tears, before launching into the intimately moving track “La Perla.” Seeing Sofia Kourtesis perform was a unified moment of genuine warmth at the festival, one where you could feel everyone enraptured and touched in equal measure. Even for a complete newcomer to her work, it was impossible not to be won over. —Natalie Marlin

Many acts at the festival performed; Xenia Rubinos delivered an entire musical stage show in miniature. Making the absolute most of her first appearance at Pitchfork, the genre-defying Brooklyn singer brought her latest album Una Rosa—a conceptual experimental-pop approach to grief, weariness and the Caribbean music that inspired her—to life with as much visual flair as the music itself. Expanding from her usual two-piece staging with drummer/producer Marco Buccelli, the Una Rosa live experience saw Rubinos add on two additional backing vocalists who contributed to the dramatic, choreographed set pieces. And what striking set pieces they were: from stage-length blood-red fabric unfurling and arresting costume changes to Rubinos being wrapped in plastic on the cathartic electro-ballad “Did My Best,” the set proved to be unforgettably theatrical without sacrificing the exhilaration of the festival setting. Xenia Rubinos’ debut at Pitchfork was immaculate, and hopefully lays the groundwork for even bolder futures for her in the years to come. —Natalie Marlin