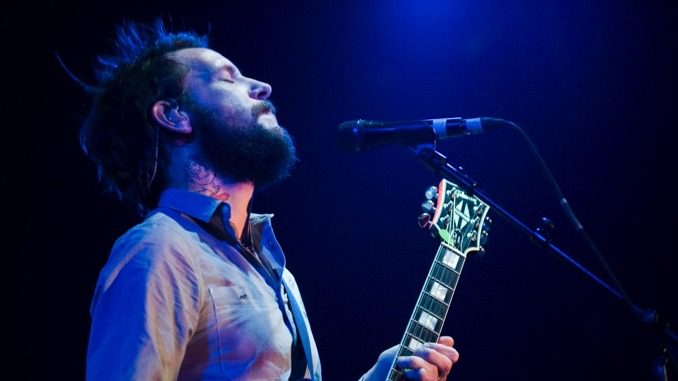 Seattle’s Band of Horses have taken many forms since their early-2000s inception, with vocalist, guitarist and songwriter Ben Bridwell as their only constant. After emerging from the ashes of Carissa’s Wierd, and a short stint as simply Horses, the band caught Sub Pop’s attention while opening for Iron & Wine in their hometown, releasing their debut album Everything All the Time on the label in 2006. The acclaimed LP established Band of Horses’ signature, reverb-blurred sound, combining the atmospheric guitars and yelpy vocals of The Shins with Sam Beam’s lived-in Southern storytelling, and earned them the “indie rock” and “alt-country” tags, as well as comparisons to everyone from My Morning Jacket to Built to Spill. The band showed its proclivity for flux almost immediately—founding bassist Chris Early and drummer Tim Meinig bowed out after Everything All the Time’s recording, and after the album “took off really fast,” so did vocalist and guitarist Mat Brooke, leaving Bridwell to start fresh.

Nevertheless, Band of Horses broke out in earnest with 2007’s Cease to Begin, which cemented their position as prominent members of the late-2000s indie-rock boom, peaking at #35 on the Billboard 200 and producing a handful of their best-loved songs, including opener “Is There a Ghost” (and four more of this list’s 10 tracks). Bridwell and company would continue to pair commercial and critical success from that point forward, earning a Best Alternative Album Grammy nod for their 2010 major-label debut Infinite Arms, and #13 and #19 debuts with 2012’s Mirage Rock (prod. Glyn Johns) and 2016’s Why Are You OK, respectively. Those LPs bookended a 2014 live album, Acoustic at The Ryman, and 2015’s Sing Into My Mouth, a covers album by Bridwell and Beam, both South Carolina natives.

In 2017, Tyler Ramsey and Bill Reynolds left Band of Horses after a decade-long tenure, signaling Bridwell’s intent to begin a new era of the band while also returning to its roots. Those ambitions manifested in last week’s announcement of Things Are Great, the band’s first new album in over five years, which will close the widest gap in their discography to date upon its Jan. 21, 2022, release. In the meantime, we’re seizing the opportunity to celebrate the best of Band of Horses’ catalog so far, from Everything All the Time to today. Find our picks for the band’s 10 best tracks below.

A standout on the tail end of the Everything All the Time tracklist, “Monsters” is one of the most overtly Southern-sounding songs from Band of Horses’ debut. Sparse without feeling austere, the warm folk-rock track is driven only by Meinig’s kick drum and tambourine in its first phase, with Meinig’s banjo plucks and a simplistic electric guitar riff adjoining Bridwell’s vocals. He sings about the ugliness of mob mentality (“When awful people, they surround you / Well, ain’t they just like monsters?”), but the song’s sun comes out after its first chorus: “Though to say we got much hope / If I am lost, it’s only for a little while.” That move from darkness into light is what makes the track stand out, with Bridwell’s steadfast optimism carrying “Monsters” from its humble beginnings to a triumphant finale.

Band of Horses evoke small-town utopia on this Cease to Begin track, driven by an R.E.M.-esque guitar chug that’s part college rock and part Americana, and a Southern swing rhythm courtesy of then-new drummer Creighton Barrett. “Ode to LRC” immortalizes a secluded beach lodge called the Little Red Caboose where Bridwell once stayed, drawing inspiration from its log book’s personal histories. The resulting “Ode” paints an intimate, yet idealized portrait of the place. “The town is so small / How could anybody not / Look you in the eye / Or wave as you drive by?” Bridwell muses, strings swelling behind him as he reaches the blissful conviction of the song’s surprisingly bright-eyed, yet earned conclusion: “The world is such a wonderful place / La-di-da / La-da-di-da-da.”

Another Cease to Begin standout, “Cigarettes, Wedding Bands” is one of the album’s most important tracks, the penultimate eruption before closer “Window Blues” sifts through the ashes. Bridwell and new recruit Rob Hampton’s crashing guitars loom large from the start, casting a long, dark shadow over the song’s story of working-class struggle, violence, lies and loss. Like on “Ode to LRC” before it, history resonates through the years on “Cigarettes, Wedding Bands,” the past like a living thing that refuses to go quietly, as in the titular image of “Our parents’ hands / Cigarettes, wedding bands.” Bridwell’s passionate vocals, particularly in the hooky choruses, match the intensity of the track’s driving guitars, all awash with bitter sadness and anger that stick with you.

Bridwell has said the band’s Grammy-nominated third album was, “in many ways,” their first, with the continued presence of Barrett, and the additions of Ryan Monroe (keys), Ramsey (guitar) and Reynolds (bass), creating a newly cohesive unit. The sole Infinite Arms cut to crack this list (though “Dilly” and “Neighbor” came close), “Laredo,” is evidence of that creative bond, with waves of warm, melodic electric guitar capable of captivating all on their own. Barrett moves the track along at an easygoing, yet insistent tempo; meanwhile, Bridwell returns to isolation in nature as his inspiration, spinning the darkly angsty tale of a lone traveler trying to outrun their heartache (“I’m at a crossroads with myself / I don’t got no one else”), and the love with the power to either rescue them from the edge, or push them over it. We’re never made privy to the outcome, which only makes “Laredo” a more intriguing place to which to return.

A gem of a post-2010 Band of Horses track, “Slow Cruel Hands of Time” was the second single from 2012’s Mirage Rock, the arguable nadir of the band’s discography. Written solely by Bridwell, the stripped-down folk song finds the bandleader leaning into his vocal likeness to Neil Young, singing both nasally and wistfully over a rustic assembly of plucked acoustic guitars, tapped percussion, minimal bass, and organ and electric guitar accents. Evoking the best of Sun Kil Moon, Band of Horses and esteemed rock producer Glyn Johns make much of the song’s gentle, retro instrumentation; meanwhile, Bridwell tells the quietly devastating story of an old-timer’s mind slipping away from them with age, singing, “The slow climb, the hard fall / Sometimes I don’t want it at all / I’ve done this so long / It’s something I oughta know.” It’s a tale as old as time, depicted with painful clarity: “The slow cruel hands of time, turning you back into a child,” Bridwell finally sings, his voice like a bell.

Everything All the Time’s aptly titled opener may be the dreamiest Band of Horses have ever sounded, with Brooke’s spacey guitars and Bridwell’s melodic lap steel riffs practically sloshing around your ankles. Capitalizing on the song’s intoxicating fog of sound, Bridwell delivers indistinct lyrics about losing himself in wintry isolation (“I’m already gone / I’m wrapping up / the presents I bought”), just as his reedy voice gets lost in the crescendo as he realizes he doesn’t “know anyone.” What Bridwell’s songwriting lacks in detail, it makes up for with the mood that hangs heavy all around it, evoking the gnawing feelings of discontent and loneliness that so often break through the surface at the end of long years … or, in this case, at the beginning of great albums.

Not to spoil anything, but it’s all undisputed Band of Horses classics from here on out. The song that started it all, Everything All the Time lead single “The Funeral” is the band’s most-streamed song on Spotify by an enormous margin, and has appeared in everything from films and TV shows to other songs, with Kid Cudi’s “The Prayer,” for one, sampling it. All bright sound and dark lyrics, “The Funeral” is Band of Horses at their most dynamic, beginning with its ghostly riff and Bridwell’s distinctive vocals before suddenly exploding into guitar-rock overdrive, only to lapse into dirge mode and back again. Bridwell meets crashing power chords with haunting “ooh”s and the resolute assurance, “At every occasion, I’ll be ready for the funeral,” and a cathartic instrumental peak—the kind you just know makes audiences flip out—puts an exclamation point on it all.

Not to spoil anything more, but it’s all Cease to Begin cuts from here on out. The album’s opener and lead single, as well as Band of Horses’ first track to make the U.S. charts, “Is There a Ghost” is a paranoia-infused, carefully calibrated rocker. Bridwell captures a universal state—alone in bed, imagination running wild about a bump in the night—in just a dozen-odd words, repeating them like a mantra to achieve an unshakably hypnotic effect. Bridwell and Hampton’s guitars go from softly plucked and string-backed to hard-charging, with roiling swells of distortion to match Bridwell’s mounting anxiety and loneliness. The propulsive track builds steadily to guitar-rock nirvana, the lead riff locking in until it all falls away, like those first rays of light dispelling the long dark.

One of the great indie-rock love songs of the 2000s, “No One’s Gonna Love You” is prototypical Band of Horses, a relentlessly melodic, mid-tempo tangle of reverb-soaked guitars and Bridwell’s plaintive vocals. Feathery, fluttering keys fill in the gaps, softening the instrumental where it may have otherwise felt skeletal. The lyrics are direct in a way that’s relatively rare across the band’s catalog: “Anything to make you smile,” Bridwell swears, repeatedly invoking “the ever-living ghost of what once was,” his lost love palpable. There’s no malice in the song’s eponymous oath—”No one is ever gonna love you more than I do”—but rather an overwhelming sense of certainty, despite all the attendant suffering. It’s not the possibility of a new beginning that drives the song (“Things start splitting at the seams and now / It’s tumbling down,” Bridwell admits), but rather the passion that’s survived through the pain—the bittersweet echoes of the narrator’s most intimate personal history.

The gloriously front-loaded Cease to Begin opens with Band of Horses’ finest four-track sequence, with “Is There a Ghost” (#3), “Ode to LRC” (#9) and “No One’s Gonna Love You” (#2) leading, at last, into “Detlef Schrempf.” Bridwell named the song after the German-American NBA star (and eventual Parks and Recreation actor) who played for the band’s hometown Seattle SuperSonics for years, only to sign with their rival Portland Trail Blazers in the late ‘90s. (While some claim that defection inspired the song’s story of being left by a lover, Bridwell has said it’s “more of just an homage to the way he spells his name, more than it is about himself as a person.”) At any rate, “Detlef Schrempf” is loping and lovely, a stunning showcase of Bridwell’s singing and songwriting that holds you rapt from its initial descending bass line to its final lone guitar note. Like many of Band of Horses’ best tracks, the song is built around a lyric that would fall flat coming out of countless other artists’ mouths. But Bridwell’s pronouncement of “My eyes can’t look at you any other way,” over a luminous, tumbling guitar, rings entirely true, professing a reverence that’s etched in stone, come what may. “If you say you’re gonna go, then be careful / And watch how you treat every living soul,” he sagely sings, radiating love for not only his beloved, but also for us all.

Scott Russell is Paste’s music editor and he’ll come up with something clever later. He’s on Twitter, if you’re into tweets: @pscottrussell.