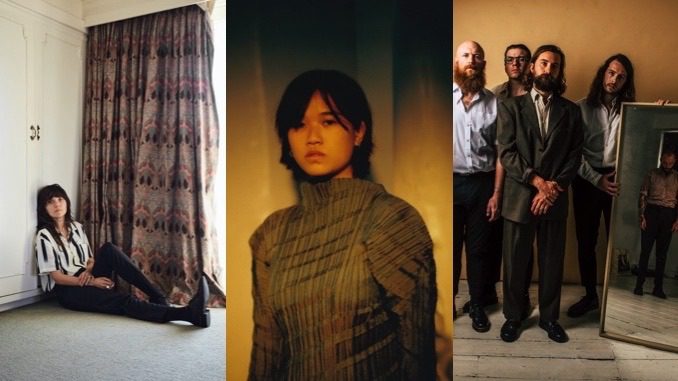 Though the new music release apparatus slows down considerably as each year nears its end, this November is evidence that plenty of must-hears wait until we least expect it to make their marks. Beloved Australian singer/songwriter Courtney Barnett returns with her third record this month, while impressive Los Angeles newcomer Hana Vu makes her debut, and English rockers IDLES change the game on their fourth outing. Many of this month’s most exciting releases are right around the corner, with six of our 10 most-anticipated out tomorrow, Nov. 5. See what the Paste Music team is most looking forward to this November below.

Hana Vu is simply bursting with talent at such a young age, having released her stunning debut EP in 2018 at only 17 years old. As many can attest, three years carries a lot of change. For Vu, it meant expanding her vision even further to create Public Storage, her breathtaking debut album. Although it’s easy to box her in with artists such as St. Vincent and Japanese Breakfast (good company to keep!), Vu has moved from her bedroom-pop roots into the crevices of guitar feedback, eerie synths and indie-rock fundamentals for a collection of songs that still capture the wistful teenage days of love and heartache, performance and habit. Public Storage is a fascinating listen, and Vu is perfectly poised to deliver her message. —Jade Gomez

Nation of Language: A Way Forward

We almost didn’t get to hear Brooklyn band Nation of Language’s stunning 2020 debut Introduction, Presence. Like many bands, Ian Devaney, Aidan Noel and Michael Sue-Poi struggled financially, until Noel and Devaney got married and asked their loved ones to fund their album as a wedding present. And now, thanks to the unexpected (but totally deserved) success of their first album, we’re being graced with A Way Forward, a carefully constructed and emotionally resonant sophomore effort. Nation of Language don’t just keep doing more of the same on A Way Forward, though they totally could have gotten away with that. They extend themselves, influenced partly by krautrock, rather than sticking entirely with the new wave sound of their debut, but also remain impressively sonically consistent. With their sophomore album, Nation of Language solidify themselves as mainstays of ’20s synth-pop music. —Clare Martin

When the likes of Daft Punk are producing your debut single, you’re doing something right. Such is life for Australian dance-pop five-piece Parcels, who’ve pulled out all the stops on the follow-up to their self-titled 2018 debut. Recorded at Paris’ renowned La Frette Studio, produced by Parcels and mixed by James Ford of Simian Mobile Disco, Day/Night is an ambitious, sprawling second effort, featuring 19 total tracks spread across two distinct discs, Day and Night. The band’s bright, funky, guitar-driven and synth-streaked pop takes on bold new dimensions on the double album, with string arrangements by Owen Pallett introducing a sense of sweeping drama and intensity. Day/Night stacks hope and heartbreak against each other, inviting listeners to lose themselves in both or either, with Parcels lushly soundtracking high and comedown alike. —Scott Russell

Penelope Isles: Which Way to Happy

Penelope Isles’ 2021 output cannot be tied to one specific genre, whether it be the poppy delight of “Iced Gems,” the shoegaze-flavored “Sudoku” or the Springsteen-esque “Terrified.” This sibling duo’s forthcoming album Which Way to Happy builds further upon their explorations of sound, unbound to the constraints of style. The result is a cohesive grab bag of influences ranging from The Smiths to Tame Impala, with the charming shakiness of a new band—comprised of siblings, nonetheless—without the pressures of doing anything other than making what feels right. For Penelope Isles, it feels like the perfect way to go, and you can hear the passion in each note. —Jade Gomez

SeeYouSpaceCowboy: The Romance of Affliction

It’s easy to reduce hardcore to its sonic qualities, completely ignoring lyrics in favor of head-banging to a nasty breakdown. However, it does a great disservice to the depth it contains. For SeeYouSpaceCowboy, the genre is a fitting medium for frontwoman Connie Sgarbossa’s trauma and pain. On the band’s new album The Romance of Affliction, Sgarbossa’s visceral lyricism opens up onto the catharsis of healing and the necessity of grief brought upon by the passing of her girlfriend, wrapped up in philosophical reflections and earnest pleas for answers. It’s an impressive album that dives even deeper into the darkest of places within the human psyche, but that’s what SeeYouSpaceCowboy have always been about: confrontation in all of its forms. —Jade Gomez

“Referring to the process as the deepest level of catharsis and therapy I have ever experienced would be a huge understatement,” Snail Mail’s Lindsey Jordan said of making her new album. That healing comes packaged in a blend of blistering rock and pensive singer/songwriter product that isn’t too far off from what we first heard of Jordan on Lush and even her Habit EP from 2016. The main difference on Valentine is Jordan’s newfound vocal confidence: She has perfected her singing voice to match her musical maturity, making Valentine more like Lush’s cool, assured older sister than simply a sequel. Undoubtedly one of the best songs of the year, the triumphant title/opening track, also the album’s lead single, finds Jordan beyond frustration while yearning for the ex who dumped her, or maybe just someone out of reach. The song’s grand scale works because it’s so easy to believe Jordan is as desperate as she sounds. Breakups aren’t just sad—they’re rage-inducing. “So why’d you wanna erase me?” she hollers through the tears, before adding, “You won’t believe what just two months do / I’m older now, believe me / I adore you.” —Ellen Johnson

Courtney Barnett makes music for nosy people and daydreamers who eavesdrop on conversations on the train, or conjure up life stories for passerby in the park. It’s that minutiae of daily life that is so succinctly captured on Barnett’s third studio album Things Take Time, Take Time. She unfolds issues of greed and jealousy in the same breath as those of heartache, still managing to possess an infinite amount of love and empathy for those who hurt. It is a diary of sorts, full of honesty and wit, and Barnett is letting us into its pages. —Jade Gomez

With “The Beachland Ballroom,” the lead single from IDLES’ fourth studio album Crawler, the quintet put us all on notice: “This is not your average IDLES record” may as well have been a lyric, it was so explicit. As we wrote upon the song’s release, it was “a statement-making first preview of IDLES’ new material, introducing a heavy dose of soul into their pummeling, sneering sound—an unlikely swerve the band pulls off, in both surprising and satisfying fashion.” Second single “Car Crash,” released just yesterday (Nov. 3), doesn’t buck expectations quite so completely, but is just as compelling: Over a tightly coiled, almost industrial rock groove (showing the hip-hop influence of co-producer Kenny Beats), frontman Joe Talbot rhythmically talk-sings, “Smash / I’m a car crash,” with the band’s dual guitars later reflecting that destructive image. It’s a thrill to see IDLES pushing themselves harder than ever despite being bigger than ever, channeling their gritty intensity in unexpected directions. —Scott Russell

The third album from Ovlov after their 2013 debut AM and 2018 follow-up Tru, Buds is another winning entry in the cult Connecticut quartet’s discography, with sonics as tight-knit as their creators: With an assist from returning producer and engineer Michael John Thomas III, who worked on both the band’s previous albums, Ovlov—frontman Steve Harlett, longtime guitarist Morgan Luzzi and Steve’s younger brother, drummer Theo Harlett, welcome the Harletts’ older brother, Jon (bass), and father, Ted (sax on “Cheer Up, Chihiro!”), into the fold, while Jordyn Blakely (Stove, Bartees Strange, Smile Machine), Erin McGrath (Dig Nitty) and Alex Gehring (Ringo Deathstarr) contribute vocals. Harlett(s) and co. do more with their fuzzed-out sound than ever on Buds, from the warm ode to friendship of “Land of Steve-O” to the quick-twitch jangle-pop of “The Strokes” and crashing, cathartic dynamism of noise-rock closer “Feel the Pain,” all ensuring that the cult of Ovlov will only grow. —Scott Russell

The first full-length collaboration between Robert Plant and Alison Krauss, 2007’s Raising Sand, went platinum and swept all six Grammy categories in which it was nominated—Album and Record of the Year included. 14 years later, the Rock and Roll Hall of Famer and 27-time Grammy-winning Bluegrass Hall of Famer have reunited for their much-anticipated follow-up, Raise the Roof; the duo wrapped recording on their T Bone Burnett-produced second record in fall of 2019, shortly before the country went into COVID-19 lockdown. Surrounding the bluesy “High and Lonesome,” an original Plant and Burnett co-write, are reimagined renditions of songs by the likes of Merle Haggard, Allen Toussaint, The Everly Brothers, Anne Briggs, Geeshie Wiley, Ola Belle Reed, Brenda Burns, Bert Jansch, Calexico, and Randy Weeks/Lucinda Williams. Three staggering talents (Burnett included) breathe new life into a century of American music on this project—need we say more? —Scott Russell