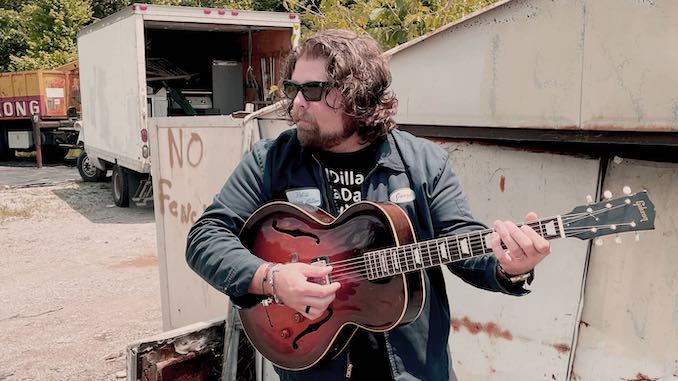 Chicago-born, Nashville-based singer/songwriter and guitarist JD Simo will release his third studio solo album Mind Control this Friday, Nov. 5. You can listen to Mind Control exclusively at Paste before it’s available on streaming and digital platforms.

From an artist who has collaborated with the likes of Jack White, Tommy Emmanuel, Luther Dickinson and Blackberry Smoke, played in psychedelic band SIMO, and was invited to join Phil Lesh’s Phil Lesh and Friends, Simo has a history of working with a diverse range of sounds. On Mind Control, his reach is as thrilling and inviting as one expects.

Mind Control is the follow-up to Simo’s 2020 self-titled album, and a product of the pandemic. Simo delves into more stark topics than in his past, unafraid to pair them with a positive theme of growth and wrap them up in his murky, funky psychedelic sound.

Simo tells Paste of his creative process and inspiration for the album:

Over lockdown my buddies and I were really obsessed with Afro Beat and North Mississippi trance stuff. So lots of Fela, Tony Allen and Junior Kimbrough especially but also Fred McDowell, Jessie Mae Hemphill, CeDell Davis. R.L. Burnside too. So that mix really permeates a lot of the record. Those Afro Beat grooves with that real raw sludgy thing on top. It happened really naturally and without preconception.

Listen to Mind Control exclusively at Paste below, and find Simo’s upcoming tour dates and performance of “Go Away Satan” for Paste in Nashville further down.