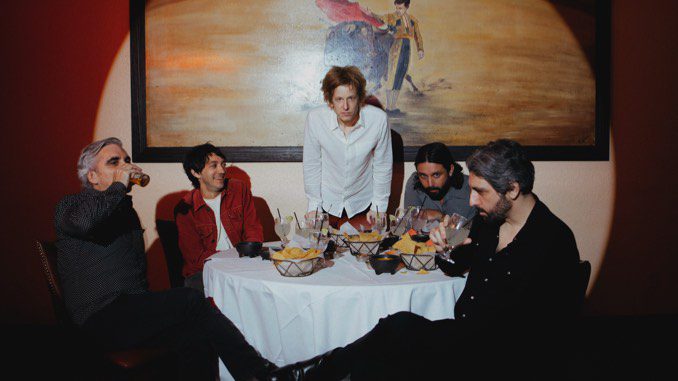 The once-elusive Beatles fan club single “Christmas Time (Is Here Again)” has enjoyed being officially released after existing as a bootleg for almost three decades. It has since become a beloved holiday hit, and now it has a new life with a special cover by Spoon. The cover, released as part of Spotify Singles’ Holiday Edition, has been released along with many other covers from artists ranging from Ashnikko to Julien Baker.

Recording “Christmas Time (Is Here Again)” was a group effort that pulled us away from rehearsals and quickly sent us down a turbulent path of what you might call the Christmas spirit. And it’s our song with the most band members doing vocals ever – pretty sure I’m counting four. THE WAR ON CHRISTMAS IS OVER.

Spoon is gearing up for an exciting 2022, recently announcing their forthcoming album Lucifer On the Sofa (Feb. 11, 2022, Matador Records). The album, which is their first in five years, was co-produced by the band and Mark Rankin (Adele, Queens of the Stone Age).

Stream Spoon’s cover of “Christmas Time (Is Here Again)” here and look below to revisit their first single off their forthcoming album “The Hardest Cut” as well as “The Ghost of You Lingers” from their Daytrotter Session. You can preorder Lucifer on the Sofa here.