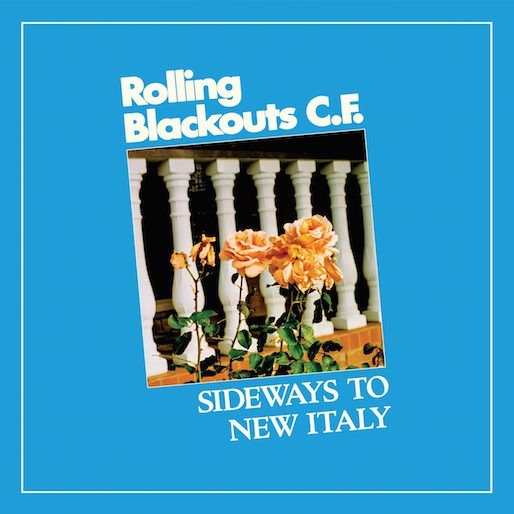 In order to love and understand each other, first we must love and understand ourselves. It’s in that spirit that Rolling Blackouts Coastal Fever, Melbourne, Australia’s hard-touring indie-rock act, travel Sideways to New Italy, offering up a sophomore album that, though born out of the disconnection of being on the road for months at a time, seeks to trace the band’s humanity back to their roots. It’s an intimate, personal journey towards self-knowledge, with one foot in the past and another in the future, on which the rising “tough pop/soft punk” stars reshape their sonic identity while turning their lyrical focus on the images, feelings and memories that serve as life’s most precious connective tissue. The band combines those fragments into a mosaic greater than the sum of its parts, an accounting of times gone by, depicted via concrete detail and abstract imagery alike, that attempts to summon the spirit needed to move forward.

Fans of Rolling Blackouts C.F.’s The Go-Betweens-indebted, jangle-pop-tinged guitar-rock will find themselves on familiar ground on Sideways to New Italy. The quintet—which comprises singer-songwriter-guitarist trio Tom Russo, Joe White and Fran Keaney, plus bassist Joe Russo and drummer Marcel Tussie—arrived essentially fully formed with 2016’s Talk Tight, and have remained remarkably consistent since, from 2017 EP The French Press to their acclaimed full-length debut, 2018 standout Hope Downs. Their second album’s roots run deep through their creative output to this point: The chords of b-side standout “Cameo” originally belonged to Hope Downs’ abandoned title track, while the chorus of closer “The Cool Change” first appeared in a song Tom Russo, White and Keaney performed in a previous band back in the 2000s. And from those roots, the band continues to grow, excelling at their characteristically propulsive rock while making room for more emotion-imbued softness and nuanced instrumentation to shine through, a natural progression that quietly slips an arm around the listener, rather than grabbing them by the lapels.

Take album opener “The Second of the First” or lead single “Cars in Space,” which both allow dreamy languor to creep in around the edges of an exhilarating motorik chug. Even the opening moments of the former find the band wielding their array of guitars with a particular dynamism, intertwining chiming acoustic chords with a galvanizing electric riff, and Joe Russo’s bass thrums with that same electricity as Keaney bridges the gap between alienation and connection: “And I feel outside it / Lost on descent / Like two transplanted palms / You look like me.” As if to reinforce the depth of their intent, they recruit White’s partner and a close friend of the band to recite a spoken-word refrain over the psychedelic instrumental bridge: “Nothing is the same. The street hasn’t changed,” the duo chant, their voices melting into one, as if the song itself is holding those two seemingly contradictory truths simultaneously in mind.

Centerpiece “Cars in Space,” meanwhile, achieves an equally well-balanced arrangement, taking for its setting a uniquely precious place amid the ongoing pandemic: a drive-in theater. Guitars as intricately connected as puzzle pieces meet spirited horns (!) and Tussie’s insistent beat as Tom Russo and Keaney conjure up just enough imagery to engross us along with their moviegoing characters: “Your face / It shines / In the flicker / Of the film.” The song builds to an explosive instrumental bridge, lifting off like we’re traveling into space ourselves, or perhaps just taking a bit of time away from our lives by stepping into those we’re seeing on a screen.

The development of Rolling Blackouts C.F.’s sound is even more evident on “The Only One,” a breathy, yearning love song that finds the band giving more over to their pop instincts than ever before. They’ve always had a propensity for melody, couching unmistakable hooks in their rowdy, muscled-up guitars and coolly detached lyrics, but here all that rock is chipped away to expose those gold veins. Joe Russo’s lolling bass line ushers in delicate guitar harmonics, Tussie’s danceable 4/4, and lively horn and harmonica squalls, while White makes a relatively rare move to the mic, chirping, “I’m back in the state / To find another way back / Into the new world / That looks exactly the same.” The song is noticeably slicker than anything on the band’s past releases, but it retains their familiar verve—it’s tight, if not tough—and economically evocative songwriting (“New season’s frost / Dead river rot / And I will run to you”).

Pop polish is far from the only fresh element introduced on the album: “Sunglasses At The Wedding” finds Rolling Blackouts C.F. dabbling in Belle & Sebastian-style chamber-pop, adding a more delicate dimension to the record by way of subdued acoustic guitars, throbbing bass and atmospheric synths; “Cameo” opens with similarly stripped-down instrumentation, only taking off on Tussie’s kickdrum-stomping mark, immersing the listener in sensory detail early on, then building to a whirlwind of transcendence as Keaney sings, “I put myself in a letter / I send myself on the powerlines / A picture of yourself in the future / A nation in the plains, beyond the frame”; and “The Cool Change” is peppered with sunny psychedelia and down-under twang, closing out the LP on an ironically warm note.

It’s not our home that changes, really—it’s us. But our origins have much to teach us about where we ought to head next. And in heading Sideways to New Italy, Rolling Blackouts C.F. continue to make a strong case as one of Australia’s most vital rock acts, if not the world’s.