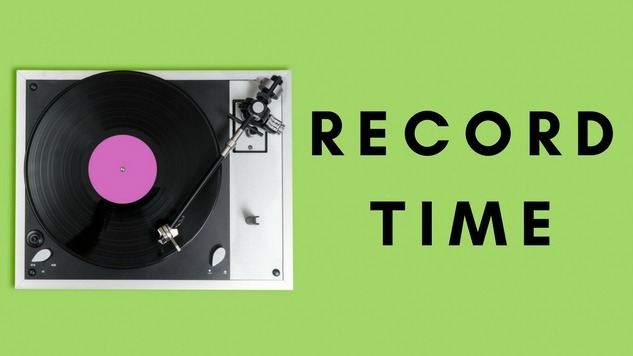 Record Time is Paste’s monthly column that takes a glimpse into the wide array of new vinyl releases that are currently flooding record stores around the world. Rather than run down every fresh bit of wax in the marketplace, we’ll home in on special editions, reissues and unusual titles that come across our desk with an interest in discussing both the music and how it is pressed and presented. This month, that includes new pressings of reggae classics, a sweat-inducing live recording of a blues-rock mainstay and a series of funk-jazz reissues with a psychedelic twist.

To celebrate what would have been Bob Marley’s 75th birthday last year, Island Records reissued the albums that the reggae legend released with the British label from 1973 to his death in 1983, with the addition of Legend, the greatest hits compilation that is one of the best selling albums of all time. And these fresh pressings were cut using half-speed mastering techniques, which help beef up the sound of these already spectacular recordings. As Marley’s fanbase has only grown and deepened over the years, all 12 albums sold out online quickly. But if you have an abiding interest in his work and want to hear it with clarity and intensity, you’d do well to hit your local shop or online resellers to find these. The sound of Marley and his crack backing band, which included Peter Tosh and Bunny Wailer in its earliest incarnation, is bulbous and thick on these reissues. The basswork of Aston “Family Man” Barrett is given room to rumble, and the balance of elements, particularly the interplay between Marley and backing vocalists the I-Threes, is well-preserved. With the centenary of Marley’s birth right around the corner, this won’t be the last time Island finds a way to repackage and resell his work. But I’m skeptical that those future reissues will sound as good as these.

Josh Klinghoffer always had more to offer the world than what he could present to the world during his tenure with Red Hot Chili Peppers. That’s as clear as ever on his second album as Pluralone. Recorded in the thick of the pandemic, and almost entirely on his own, I Don’t Feel Well has the ambition and artistry that belies its humble beginnings. Klinghoffer’s music is the clearing out of an apartment after a bad breakup, redecorating the bad memories with moments of bright pop, string-soaked ballads and piano-driven weepers. Though he was born just before the end of the decade, he sounds like the child of ‘70s AM radio. Everything on the album seems colored by an inviting amber glow. It has the mark of a passion project—those kind of heady, heavily worked over sessions that take years to complete. Klinghoffer was able to knock it out in about a month. That’s the mark of a creative personality constantly trying to scratch an unreachable itch.

Manchester, England art rockers elbow closed out 2020 with a look at their past. In December, the group issued new vinyl pressings of four studio LPs and the b-sides compilation Dead In The Boot. A welcome development for fans, even if it does skip over The Seldom Seen Kid, the album that was awarded a Mercury Prize, and helped get the group a Brit Award for Best British Band. These five repressings are a great chance to track elbow’s evolution from their strong first three albums to the post-Brit Award malaise that befell 2014’s The Take Off and Landing of Everything. Asleep, Thousands and Leaders showcase a group mapping out their influences (the obvious touchstone is Radiohead, but with a healthy injection of Spiritualized’s gospel Britpop) and layer their own towering compositions atop those blueprints. It’s arms open, heart on sleeve midtempo pop that the Brits do better than anyone. These records are so precise and well-considered that anything less than perfect vinyl pressings would do them a huge disservice. elbow’s benefactors made the smart decision to work with a plant in Germany on this series, which helped bring the size and scope of this music—especially the thick bass tones that carry through each release—to its full, festival-sized glory.

Inspector 34, a Massachusetts group led by the careening voice and vision of singer/guitarist Jim Warren, is the ramshackle, homegrown sound that we need in the pandemic era. The music on their latest album Love My Life draws to mind Half Japanese, early Animal Collective and lesser known UK group the Hamsters—all artists capable of making anthemic sounds using the jankiest of gear. I kept anticipating each song to end with the sound of an amp exploding or the circuits on their keyboards audibly melting or Alexandra Derdeian’s drum kit collapsing into a heap of steel, brass and bolts. Everything holds together and trundles steadily toward the noisy spurts of epic closer “Ride The River of Light.” As messy and inviting as the office of a long tenured college professor or the garage where a folk artist is creating massive sculptures out of rusty steel and bailing wire.

In the four decades since Young Marble Giants released their sole full-length Colossal Youth many bands have attempted to replicate this Welsh trio’s minimalist post-punk—a seemingly simple sound belying complex musical structures and lyrical depth—but none have come close. This masterwork was only possible due to hardscrabble instrumentation (harshly plucked guitar and bass or a cheap organ, backed by a rudimentary drum machine) and the hum of the analog recording equipment they used. Even if those trainspotters replicated all the right technical elements, they’d also be missing the secret ingredient of vocalist Alison Stratton who had its best vehicle for her flat yet melodic voice with the music of bandmates and brothers Stuart and Philip Moxham. The music has never sounded better than it does on this Domino reissue. The label did a bang up job remastering the original tapes and bringing the warm weirdness of YMG’s music to the right aural temperature. Included in this essential reissue is a second LP featuring the group’s first and last recordings and a few assorted rarities, and a DVD of the group’s 1980 performance in New York City.

Jarrod Lawson: Be The Change (Dome)

Jarrod Lawson’s statement of musical purpose arrives near the end of his second full-length Be The Change. But that song “Soul Symphony,” a stirring reminder, set to a lowriding groove and capped by a feathery piano solo, of how music affects lives and has, as he sings in his smoky tenor, “the power to heal,” is worth the wait. All the songs that lead up to that point are absolutely delightful—a mix of R&B/funk styles that pull from a variety of influences (The Isley Brothers, D’Angelo, Odyssey) and give them a modern jolt with Lawson’s liquid keyboard work. His entreaties for unity and equity on the title track and “Universal Chord” slip into some rote phraseology and treacly sentimentality, but his heart is clearly in the right place. And considering that he calls Portland, Oregon, one of the whitest cities in America, home, the fact that he’s even making statements like this when many of his contemporaries have kept quiet is worth celebrating.

Indie label Gearbox Records recently opened an office in Tokyo and, to celebrate this milestone, repressed select items from their back catalog of rare and modern jazz, complete with liner notes translated into Japanese and an OBI strip. For my money, your first stop should be Mønk, a previously unreleased recording of Thelonious Monk’s trio performing live in Copenhagen in 1963. Gearbox’s Darrell Sheinman and Caspar Sutton-Jones went above and beyond to source the original tapes and present it in an all-analog remaster. The music, which includes blistering takes on “Bye-Ya” and “Monk’s Dream,” practically jumps from the grooves. Also in the mix of this first flurry of re-releases is Abdullah Ibrahim’s recently recorded The Balance, which finds the South African pianist and longtime backing band Ekaya creating spiritual jazz that flows and splashes like a river, and Fyah, a 2017/2018 session led by tuba player Theon Cross that features the cream of the London scene (drummer Moses Boyd, tenor saxophonist Nubya Garcia, guitarist Artie Zaitz) throwing down some deep funk grooves and illbient-inspired breaks.

Binker and Moses: Escape The Flames or Journey to the Mountain of Forever, Live (Gearbox)

Another recent release from Gearbox is this live set from drummer Moses Boyd and saxophonist Binker Golding recording of the duo’s 2017 performance at the tastemaking Total Refreshment Centre in London. Though the instrumentation is simple, the music these two create is hardly minimalist. Boyd is a triumph on his kit, attacking it with Buddy Rich-like power and Neal Peart-like complexity. And he can lay into a tight groove with the authority and ease of Zigaboo Modeliste of the Meters. That still leaves plenty of room for Golding to assert himself with lithe, muscular solos. This double LP, pressed onto clear vinyl, condenses the breadth of London’s current jazz scene into one volatile and shiny diamond. Pairs well with any of the Gearbox re-releases mentioned above or the Jazz Dispensary re-issues mentioned below.