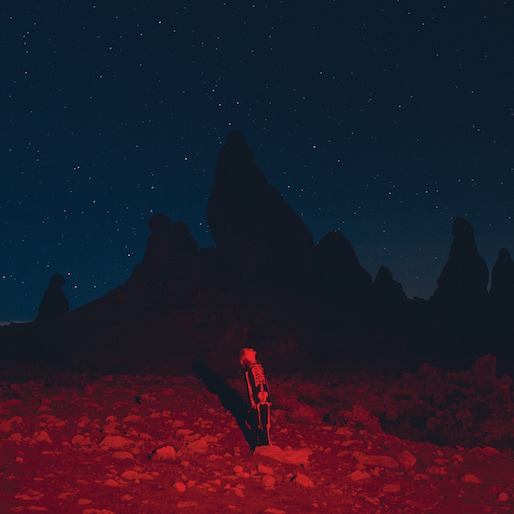 Phoebe Bridgers is blessed with many musical gifts. She is a skilled composer, of course, with the vision to turn her downcast folk songs into gorgeous, glittering gut-punches. She is, apparently, a willing and able collaborator, as evidenced by her work with Julien Baker and Lucy Dacus in boygenius, Conor Oberst in Better Oblivion Community Center and others. And she’s an engaging and versatile performer, even in pajamas. Yes, pajamas. And pajamas again.

Her sophomore album Punisher cements what may be Bridgers’ most understated gift of all: her seemingly innate ability to capture the mundanity of modern sadness in song. Tucked in among the record’s memorable melodies, clever arrangements and impressive guests are a steady stream of details that lend plainspoken perspective to Bridgers’ emotional highs and (mostly) lows. These kinds of details ground her work in the same way shading makes a still life painting pop. They make them feel not just sad, but real.

As an example, look back to “Funeral,” one of the highlights of Bridgers’ 2017 debut Stranger in the Alps. It’s a devastating tune about death and depression, and if it ended at the three-minute mark, it would still be a stunner. But she tacks on an extra bit that contextualizes the rest of the song: “It’s 4 a.m. again,” she sings flatly, “and I’m doing nothing again.” And all of a sudden … you’re there. Because you’ve been there (probably), and because Bridgers has been there, too, and she knows how to make this song about a stranger’s overdose into a highly relatable moment. The story now has a place to sit—in a dark room, screen glowing, silence deafening, thoughts racing. Again.

Those kinds of moments pop up all over Punisher, which is generally noisier and more upbeat than its predecessor. The album’s clear standout (and one of the year’s best songs), “Kyoto,” features Bridgers’ crunchiest guitar riffs yet, a soaring chorus and the travails of dealing with someone who can’t quite get their shit together juxtaposed with a wander through a 7-11 and trip to the suburbs to stare at chemtrails. “I don’t forgive you,” she sings as a horn arrangement crests over this mind-numbing scene, “but please don’t hold me to it.” Later, in “Moon Song,” Bridgers traces the blurry boundaries of a complicated relationship before laying it all out in the final verse: “You are sick and you’re married and you might be dying,” she sings over a small crescendo, “but you’re holding me like water in your hands.” The word “married” practically leaps from the song, instantly imbuing it with an unsettling feel.

Elsewhere, Bridgers kicks off the album’s title track with a bleak couplet (“When the speed kicks in, I go to the store for nothing”) that leads to reflections about her own Elliott Smith fandom, and she resembles the man himself on “Savior Complex,” a baroque indie-pop waltz laced with string parts that flutter and swoop gracefully. Prominent fiddle (played by Nickel Creek’s Sara Watkins) and banjo give “Graceland Too” a distinctly twangy vibe, and vocals by Baker and Dacus make it sound like a boygenius outtake. Meanwhile, the twinkling expanse of “I See You” echoes Punisher’s cover art, which shows Bridgers staring up at a dark sky full of stars and possibility. “I get this feeling whenever I feel good it will be the last time,” she sings. “But I feel something when I see you now.”

Baker and Dacus also appear on the album’s epic closing track, “I Know the End,” and so does Oberst, his Bright Eyes bandmate Nate Walcott,Yeah Yeah Yeahs guitarist Nick Zinner, Kentucky folk singer Tomberlin and a bunch of other folks. It spends a little over two minutes existing as a perfectly pretty folk tune before morphing into a horizon-wide, apocalyptic road song that surges like Explosions in the Sky and itemizes the implosion of 21st century America: commercialism, conspiracy theories, environmental disregard, naked nationalism, desperate escapism. And then, in its final 70 seconds, the song goes haywire, with gang vocals, a new melodic motif, atonal chaos and some impassioned screaming before fading out into hiss. In a lot of ways, “I Know the End” feels like Bridgers’ version of “Let’s Not Shit Ourselves (To Love and To Be Loved),” the politically charged folk-punk rambler that ends Bright Eyes’ 2002 album Lifted, or the Story is in the Soil, Keep Your Ear to the Ground. They diverge at their conclusion, however: Oberst finishes his song with the hope that, ultimately, love may be just enough to pull us through. Bridgers offers no such thing. “The billboard said ‘The End Is Near,’” she sings. “I turned around, there was nothing there. Yeah, I guess the end is here.”

It kind of feels that way, doesn’t it?

It’s tempting to wrap up this review with a line about how lucky we are to have Phoebe Bridgers around to chronicle these times. And maybe we are—maybe the middle section of “I Know the End” will turn out to be foreshadowing. But for now, her strengths still lie in interpreting life’s humdrum, where happiness and heartache intermingle, and none of it makes much sense till it’s in the rearview mirror. Early in “I Know the End,” she sings:

When I get back, I’ll lay around
Then I’ll get up and lay back down
Romanticize a quiet life
There’s no place like my room

For most of us, that’s more or less what real life looks like. And it’s why Phoebe Bridgers’ songs feel less like dispatches from a supremely talented artist and more like homemade hymns sung at human scale and hand-delivered directly to your heart.

Ben Salmon is a committed night owl with an undying devotion to discovering new music. He lives in the great state of Oregon, where he hosts a killer radio show and obsesses about Kentucky basketball from afar. Ben has been writing about music for more than two decades, sometimes for websites you’ve heard of but more often for alt-weekly papers in cities across the country. Follow him on Twitter at @bcsalmon.