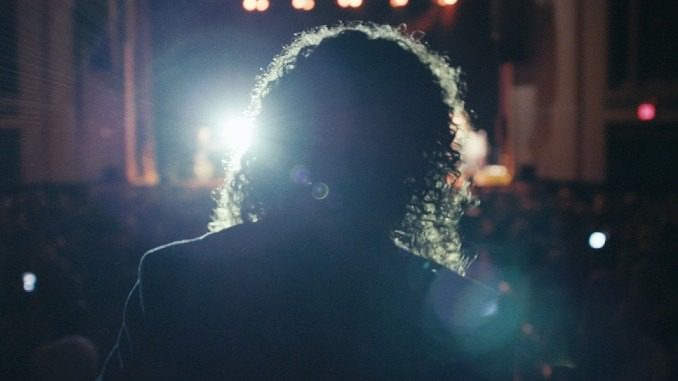 Kenny G is aware that he’s less a personality to people than he is a sound. And that sound might be as divisive as sounds get, having at once made the 65-year-old a preposterously rich man and a decades-long cultural punching bag. Listening to Kenny G, a new documentary from Hail Satan?’s Penny Lane (and serving as part of HBO’s Music Box docuseries), sets out to finally untangle the man from the meme. But as it becomes clear that the two are quite happily fused together, the edges having been smoothed out a long time ago, she’s forced to take the whole curly-haired mass seriously instead.

Born Kenneth Gorelick, Lane’s subject is a self-described “Jewish sax player from Seattle.” Those who knew him as a student at Franklin High remember him as quiet and shy, but obviously super smart. No girlfriend—at least, not unless you count the sax, says his jazz instructor. Gorelick took to the instrument early, playing it from age 10 and starting to book professional gigs in his teens. Even while pursuing an undergrad in accounting, he envisioned himself as the “white Grover Washington Jr.” By 25, he’d played second fiddle (second sax?) to multiple big-name artists, from Barry White to Jeff Lorber.

It was while on stage with Lorber in 1982 that he was discovered by music legend Clive Davis. After being signed to his label, Arista, Gorelick—now operating as Kenny G—sold impressively well from the beginning. But it was in the late ‘80s, when he performed the 1986 track “Songbird” on Johnny Carson, that things really escalated. It wasn’t the song that he was supposed to perform, but he was particularly proud of the track, and went rogue on Arista at the last minute. Davis followed the appearance up by writing personal letters to radio stations, and the song eventually entered the top 10. Lane summarizes the next decade with a montage of the star being interviewed by everyone who’s anyone, never burning out or becoming any less culturally ubiquitous. It’s not long before he assumes the title of best-selling instrumentalist ever, which he still holds today.

However convincing a pair Kenny G and his instrument make, we learn early in Lane’s film that what he’s truly horny for is the idea of craft. He’s meticulous in the studio, figuratively hacking at his audio files until they’re to his liking. But his choice of instrument—that he plays one in the first place, even—seems almost beside the point. “I don’t know if I love music that much,” he admits. More than anything, he’s a collector of skills, obsessed with the idea that you can master anything via practice and persistence—by “putting in the reps.” He’s big on research: When he became a father, he read parenting books to be the best one possible; more recently, when Kanye West invited him to be part of his weird Valentine’s Day antics, he consulted his two teenage sons. He’s a pilot, a golfer, a baker of pies. He was even an early Starbucks investor. We watch him visit Franklin High with Lane, where he becomes the second-ever signature on the school’s signature wall (after the mayor).

But the star’s overall ambivalence re: music is part of what makes Kenny G a frustrating figure for jazz critics and scholars, who make up the majority of Lane’s interview subjects. For many, his work is a defanged take on the genre, called a bevy of non-compliments during the film: “Easy listening,” “wallpaper,” “waiting room music,” “palatable,” “sterile.” It’s the sort of art that doesn’t rile anyone up, which makes it perfect for liminal spaces like elevators and copy rooms, and is partly what led to its eventual characterization as “smooth jazz.” But does he consciously engineer his work for that kind of blanket appeal? “If only I was that smart,” he says, insisting that he really just makes music that he personally enjoys. It’s largely a coincidence that millions of others have liked it, too.

Another issue is that jazz comes from a rich musical tradition, one that the star doesn’t seem all that interested in. Though it’s a historically conversational genre, for instance, Kenny G acts as both caller and responder in his work. But jazz is also inextricable from Black American culture, a topic to which Lane devotes a significant chunk of the film, careful to not rush the discussion. Kenny G admits that he doesn’t give much thought to his own race, but, pressed by Lane, doesn’t take any convincing to agree that his whiteness was crucial to his commercial success in the jazz space. Like the film in general, the moment feels entirely earnest; you can practically see the cogs turning in real time. Perhaps a person as genuinely invested in self-improvement as this is also, to some extent, uncancellable as a public figure.

The star’s perfectionism makes the film fascinatingly self-reflexive. “Am I animated enough?” he suddenly asks mid-interview. “Am I too animated?” He offers that there’d probably be more oomph in him carrying his sax while he enters Franklin High, composition-wise. While the film is no puff piece, he’s not content to be along for the ride here, either. In keeping with his recent meme offerings, which have turned the tables on a culture keen on making jokes at his expense, he’s obviously recognized the power (and perhaps monetary potential) in embracing the role that everyone wants him to play. He may as well be the one in the driver’s seat. “I think that people like celebrities that get the joke,” he says. “Like, I get the joke.”

Since Kenneth Gorelick isn’t actually interested in being separated from Kenny G, Lane’s real task becomes imbuing the aggregate with some stakes. And she crushes it: Listening to Kenny G gives you all your need-to-knows so that you can take or leave the titular musician as you see fit. That said, he’s having too much fun these days—collaborating with The Weeknd and hopping on the latest SpongeBob movie soundtrack—to truly care which way you decide: “The jazz police will just do what they have to do.”

Sydney Urbanek is a Toronto-based writer on movies, music videos, and things in between. She wrote her MA thesis on Jonas Åkerlund’s music video work. She also writes a newsletter called Mononym Mythology about mostly pop divas and their (visual) antics. You can find her on Twitter and Instagram.