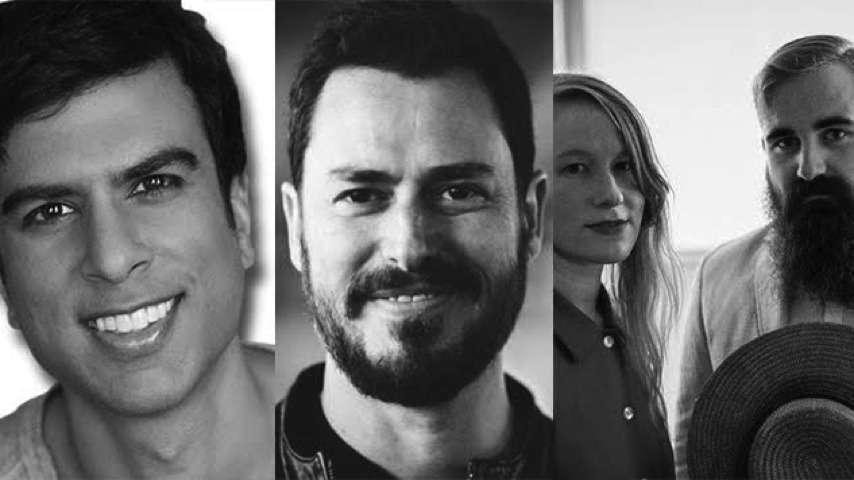 SongWriter is a podcast of stories and answer songs, featuring performances by Joyce Carol Oates, Ted Leo, Susan Orlean, Sarah Jaffe, and Michael Ian Black. You can hear an exclusive preview of the episode featuring Soman Chainani and the Cave Twins at Noisetrade.

I was a David Mayfield fan long before he began releasing music with Abby Rose as Cave Twins (and even got a chance to write a song with him once), but the band’s first album still managed to surprise me. Cave Twins have a rare blend of simplicity and virtuosity, and an odd harmonic emulsion of sweet and dark. They are knowingly demented camp counselors, preschool teachers in a Monty Python sketch.

So when I ran into an opportunity to co-produce an all ages show with the Sugar Hill Children’s Museum in my Harlem neighborhood, I immediately thought of them.

Next I needed a storyteller who appeals to children and adults, and I was delighted when Soman Chainani—author of the bestselling young adult series, The School for Good and Evil—agreed to tell a story for the show. Soman’s work is newly ascendant, not just because Netflix just announced a series based on his books, but because lots of educators and librarians are passionate about promoting the work of authors who don’t launch wrongheaded and wildly unnecessary broadsides against the trans community.

Like the Cave Twins, Soman often uses deceptively simple stories to explore complicated and dark terrain – for the show at SHCM, he wrote a brand new story about an evil bear with a fondness for goat cheese. By making the bear both sympathetic and unrepentantly homicidal, he asks the audience to reconsider their preconceptions about good and evil. As he told me, “I got frustrated by a lot of the stories I read growing up because I felt like good always won in the end, and there wasn’t a true tension.”

The Cave Twins wrote “Might Mountain Monster” in response, imagining the bear coming to live in the town below his cave. David Mayfield told me that he thinks of the bear in the story in political terms, viewing the song as an allegory about immigration. “If you’re making art at this time in America, you’re going to be affected by this divide…it’s like we’re at the brink of another civil war and it’s brother against brother again,” he said.

Abby Rose views the story in more personal terms. In fact, she and Soman both told me that they sometimes think of themselves as the bear in the story. Abby wondered whether, like the bear, she didn’t sometimes resemble a distant threatening presence to members of her conservative family.

Soman, meanwhile, sympathizes with the bear’s solitary predilections. He said he thinks his bear “would have loved the moment we’re in now, where we’re all quarantined and locked inside, and able to live this kind of meditative existence – that is his dream.”

SongWriter’s first live show of the season will feature Roxane Gay Toshi Reagon and Celisse Henderson on July 11th, presented by the Harlem School of the Arts.