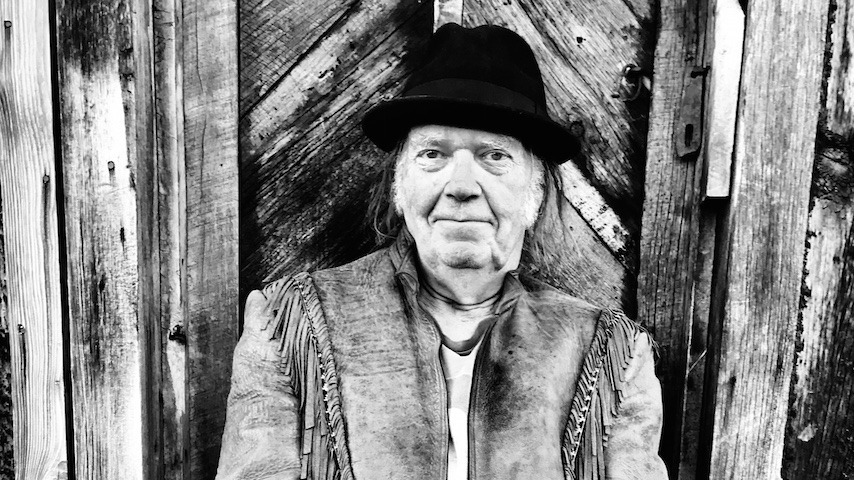 “Sometimes life hurts,” Neil Young wrote in a post addressing his fans via his official website earlier this week. Young explained the origins of his latest archival release, Homegrown, and why he balked at releasing the album upon its completion in 1975. Homegrown, he admitted, “should have been there for you a couple of years after Harvest” (the biggest-selling title of Young’s illustrious career). Originally slated as the follow-up to 1974’s On the Beach, Homegrown was fully mixed before Young decided to release Tonight’s the Night instead, after playing both albums for a small gathering of friends that included members of The Band and Young’s hard-driving group Crazy Horse.

The post actually begins as an apology for his decision to shelve the record, which would have been the legendary singer-songwriter/guitarist’s sixth studio offering. Dubbed “the one that got away” by esteemed music historian and one-time Warner Bros. publicity head Bill Bentley, Homegrown is a searingly personal document of what Young described in his post as “the sad side of a love affair. The damage done. The heartbreak.” Young, still reeling at the time, found the music too much to bear. “I just couldn’t listen to it,” he continued. “I wanted to move on. So I kept it to myself, hidden away in the vault, on the shelf, in the back of my mind.”

It’s easy to see why Young, who’d just written a breakup record stocked with what remain to this day some of his most naked lyrics ever, would want to put those sentiments behind him. His relationship with the late actress Carrie Snodgress, who earned an Academy Award nomination for her role in the 1970 film Diary of a Mad Housewife, had yielded Young’s first child, so its dissolution came with long-lasting implications. Homegrown opens with the aptly-titled “Separate Ways,” where Youngs sings, ”We go our separate ways / looking for better days / sharing our little boy / who grew from joy back then / And it’s all because of that love we knew / that makes the world go ‘round / Yes it do, yes it do.”

With its foot-dragging, funereal groove—nailed by late drumming giant Levon Helm in the way only he could—“Separate Ways” conveys the shellshock of those moments in life when you can barely see past the radius of your own loss, much less envision a brighter headspace down the road. Also befitting of the mood, Ben Keith’s slide guitar barely rises above a whisper. The 12 songs on Homegrown (five of which have appeared elsewhere in other forms) hew closely to spartan arrangements of the folk-tinged country rock that made Harvest such a hit. But right off the bat, the album provides yet more proof of Young’s penchant for loading a song with an almost volcanic emotional charge, even when everyone’s playing as softly as possible.

Musically speaking, however, Homegrown emerges from its somber shadows as early as its second track, the similarly snail-paced but surprisingly jaunty “Try,” which features Emmylou Harris, who brings her inimitable touch of grace even though all she does is back Young on the words “ooh-ooh.” Likewise, despite the plaintive lyrics on the solo piano ballad “Mexico,” which opens with Young singing “The feeling’s gone / Why is it so hard to hang on to your love?,” his bittersweet piano chords have an invigorating quality to them. Undeniably melancholy, even heartbroken,“Mexico” nevertheless makes an entrance not unlike what it feels like to open an attic window and let in some fresh air on a spring day.

The same could be said of Homegrown in terms of what it does for our perspective on Young’s body of work as a whole. Very little of the songwriting here will strike longtime fans as revelatory, with one key exception in the form of a spoken word piece titled “Florida,” which presages Young’s future noise experiments. “Florida” begins with a spaced-out Young rambling (“Let’s go to Florida… palm trees ‘n shit”) over a high-pitched drone (It’s Young and Ben Keith rubbing a wine glass, but it sounds as out-there as any avant-garde musician who ever scraped a violin bow along the edge of a cymbal). Young narrates in three stages, at first coming off as simply incoherent and stoned, then shifting into a harrowing story that makes you wonder if it really happened before it’s finally clear that Young is intentionally approximating the surrealism of a dream sequence.

Otherwise, several key tunes, such as the relatively amped-up “Vacancy,” contain hints of similarity to other canonical Neil Young songs. That said, so much of the appeal here lies in the music’s unadorned directness. And it doesn’t take long to realize that, even when sticking close to his established formula, Young in 1975 was right in the middle of one of rock music’s all-time hot streaks. What Homegrown lacks in innovation, it more than makes up for in craftsmanship. That these newly unearthed songs also offer new insights on the nature of relationships shouldn’t surprise us, but it’s quite remarkable to think that Young could sound so seasoned and life-weary before he’d even reached his 30s.

In addition to keeping up a whirlwind pace with new work, the ever-prolific Young has also churned out a slew of archival recordings from his vault over the latter phase of his career. He has plans to crank it up a notch this year in particular, with a string of never-released studio albums (including 1976’s Chrome Dreams and 1977’s Oceanside-Countryside) currently in the pipeline. But even fans spoiled by the consistent quality level of this output should brace themselves to hear Young’s body of work in a new dimension after hearing Homegrown. Hasty, premature fade-outs on several of the songs might suggest otherwise (possibly due to master-tape damage), but Homegrown isn’t just a glorified work in progress masked by a fresh coat of paint.

One could quibble about the album’s merits stacked against other classic titles in Young’s catalog. But where many of his archival releases support his legacy, Homegrown establishes itself as its own rightful—perhaps even required—chapter in that legacy, yet another bold statement from one of the musical giants of the last half-century. Indeed, Young’s fervor surrounding contemporary social issues aside, Homegrown should give pause to anyone inclined to use the word “boomer” with derision.

Saby Reyes-Kulkarni is a longtime contributor at Paste. You can find him on Twitter @sabyrk_.