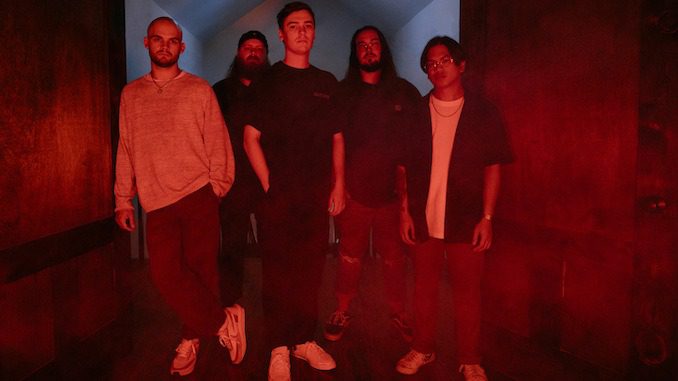 Kentucky hardcore heavyweights Knocked Loose have released a surprise EP today (Oct. 13, Pure Noise Records), their first offering since 2019’s critically acclaimed A Different Shade of Blue. The EP is a taste of the band’s more prominent death metal influences, accented with distortion and radio interludes. It’s the band’s attempt at a concept album, an idea set in motion by the themes of grief and isolation on A Different Shade and is produced by Fit for an Autopsy’s Will Putnam.

It’s a story about extreme grief and the levels a person is willing to go through to get rid of it. The story follows a main character through a traumatic car crash late one night in the woods that leaves his partner deceased, and from there you spiral with him into the depression and guilt that comes with being the cause of something so detrimental. This is the first time we really dove in and tried to create something sonically that evokes a different range of emotions and over all something that introduces tension and anxiety with a massive pay off. The story is told not only through words but through the music as well, which proved to be our biggest challenge in writing. Lyrically this story ended up being much more personal than we initially intended. We started with the idea to tell a fictional story but throughout the process, I found ways to incorporate real feelings of loss and mourning, as well as anger and self doubt. I’ve always been a very personal writer and this was originally a step away from that, into something more artistic. But in the end, it was just as therapeutic as writing a regular Knocked Loose record, and I think you’ll be able to hear that.

Accompanying the EP is a short film created by Swedish filmmaker Magnus Jonsson, who worked to create a central character based on Garris’ narrative for something hypnotizing and horrifying at the same time:

I always want to create something that complements the music, works within its structures and hopefully enriches the experience for the audience. With a longer format around 21 minutes, covering 6 tracks, I knew this dark ghost story was a very interesting challenge to explore in animation. I took the story presented in the songs and anchored that into a visual world. I wanted to create an intense nightmare, focusing on the emotional states of Bryan’s main character. I created visuals that bring the audience deeper into this story of a spiraling descent into horror and destructive madness — Taking a minimalistic and sometimes even abstract approach to many parts of the image making, creating unease and an eerie atmosphere.

Knocked Loose is set to embark on a tour in support of Gojira beginning today (Oct. 13) in Kansas City, Missouri with an added date in Buffalo, New York for Every Time I Die’s annual ‘Tid the Season. The EP is scheduled to be released physically on Dec. 17.

Below, watch the short film for A Tear in the Fabric of Life and stream the album as well as preorder physical copies here.