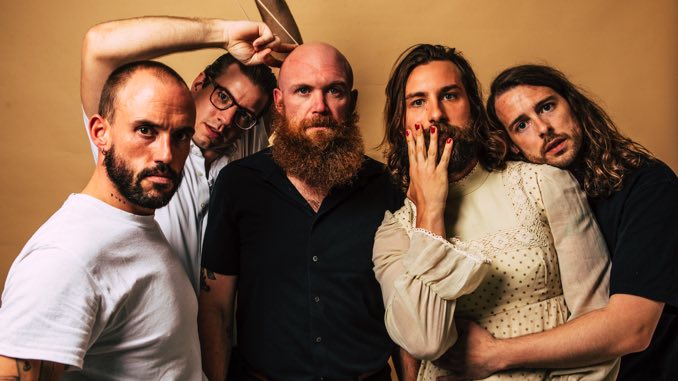 After wiping their socials and teasing the phrase “In spite of it all, life is beautiful” on billboards, English outfit IDLES have made it official and announced a new album. CRAWLER, coming Nov. 12 on Partisan Records, is their fourth studio LP, following their acclaimed, U.K. album chart-topping 2020 effort Ultra Mono. The 14-track, Kenny Beats-co-produced (!!) album’s details are out now alongside the video for lead single “The Beachland Ballroom,” a tribute to Cleveland, Ohio’s historic music venue of the same name, as well as “an allegory of feeling lost and getting through it,” as frontman Joe Talbot explains.

“The Beachland Ballroom” is a statement-making first preview of IDLES’ new material, introducing a heavy dose of soul into their pummeling, sneering sound—an unlikely swerve the band pulls off, in both surprising and satisfying fashion. Talbot blends his usual harsh barks with plaintive crooning (blending both on lines like “Made me sway, made me sway, made me sway!) over an understated backbeat, organ hum and electric guitars that spend most of the song tightly coiled, only occasionally exploding outward. Meanwhile, Talbot’s dynamic vocal performance opens a window into the band’s rapid rise to fame: “Soon as the rush went away / I did not look for a way / Damage, damage, damage,” he cries. The accompanying, one-shot music video is equally unflinching, as an extreme-closeup Talbot professes his pain directly into the camera.

“It’s the most important song on the album, really,” says Talbot of “The Beachland Ballroom.” “There’s so many bands that go through the small rooms and dream of making it into the big rooms. Being able to write a soul tune like this made me go, fuck—we’re at a place where we’re actually allowed to go to these big rooms and be creative and not just go through the motions and really appreciate what we’ve got. The song is sort of an allegory of feeling lost and getting through it. It’s one that I really love singing.”

IDLES guitarist Mark Bowen adds, “I didn’t know Joe could sing like that. He’s been trying to write ‘Be My Baby’ since the very beginning, but he didn’t want to be the punk guy wearing the Motown clothes. He wanted it to feel natural, and this song is.”

IDLES recorded CRAWLER at Bath’s Real World Studios during the pandemic, with Bowen and in-demand hip-hop producer Kenny Beats (Vince Staples, Slowthai, Freddie Gibbs) sharing co-production duties—an in-character move from a band known for resisting genre labels. The result of their collaboration pairs “vivid stories of trauma, addiction and recovery with their most soul-stirring music to date,” per a press release.

“‘Crawler’ is like the character of me in the dark warmth of my addiction—a crawler, a night crawler, someone on their knees, someone praying, someone surviving,” Talbot explains in the album’s press materials. “The grit of it. The weight of the world on you. All of those things is a ‘crawler.’”

Talbot, Bowen and company have a 23-date North American tour slated for October, beginning with a sold-out Saint Paul, Minnesota show on Oct. 7 and ending with two sold-out nights in Seattle on Nov. 9-10. Then, after a four-night run at London’s O2 Academy Brixton (three nights of which are—you guessed it—sold out), IDLES will spend January, February and March of 2022 touring the U.K. and E.U.

Watch the “The Beachland Ballroom” video below and see the details of CRAWLER and IDLES’ tour dates further down. You can preorder their new album here.